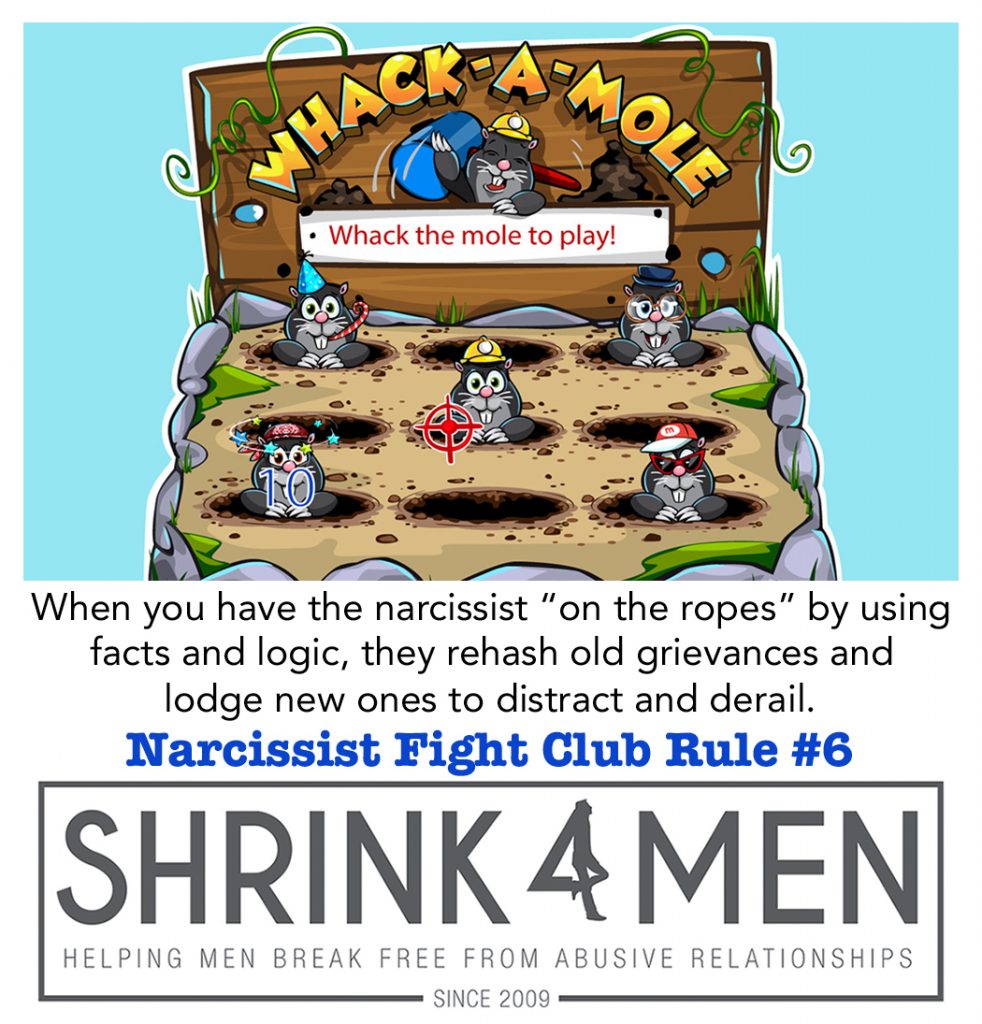 Relationships with narcissists, borderlines, histrionics, psychopaths, other bullies, professional victims and emotional reasoners are often riddled with conflict. After the idealization or love bombing stage ends and the devaluation stage begins, circular arguments, pout outs and rage episodes often become a weekly or daily occurrence. Conflicts are rarely resolved and are frequently rehashed with each new conflict.

In an effort not to trigger an abusive wife/husband or girlfriend/boyfriend, many clients find themselves walking on wall-to-wall eggshell carpet. Living this way is crazy-making and exhausting. Eventually, it becomes untenable.

Or, they re-vomit their repetitive emotional bilge and rehash past grievances that weren’t resolved or never even occurred. Alternatively, they engage in historical revisionism. Recycling an old conflict recasting themselves as the victim and you as the aggressor when, in fact, the opposite is true. the Each time you whack-a-mole back into its hole, three more pop up. It just doesn’t ever stop.

What kinds of arguments do narcissists and borderlines typically manufacture?

The pointless kind! Actually, conflict can be multipurpose. As long as the purpose isn’t effective conflict resolution that involves mutual compromise. Narcissists and borderlines routinely create conflict to get your attention. Drama also relieves their chronic boredom by giving them an adrenaline rush. Conflict is about getting a “win.” In other words, to dominate or bully you in order to feel in control.

Sometimes, they’ll pick a fight to distract you from something awful they’ve done (or are planning) that you may or may not know about yet. For example, they gin up some faux outrage, and then storm out of the house for a planned tryst with the person they’re cheating on you with. Alternatively, they use conflict to unload their feelings (that may or may not have anything to do with you) because they don’t know how to self-soothe (i.e., regulate their emotions). This pretty much makes you their emotional barf bag.

Sometimes they instigate a fight because someone else inflicted a narcissistic injury (i.e., a fragile ego boo boo). They take it out on you instead of the person who unwittingly made them feel inferior or didn’t make then feel “special.” The high-functioning ones do this rather than tarnish their public mask or false self.

Or — and this is evil — they provoke an argument to set you up for a false domestic violence charge. Men, if you’re divorcing or about to divorce a woman with these issues, don’t take the bait. Walk away from any kind of argument or disagreement and don’t forget to ABR (always be recording).

Shut conflict down by offering solutions, not endless discussions about their feelings.

To be fair, sometimes narcissists and borderlines have legitimate grievances. More often than not though, they manufacture conflict for one or more of the reasons I just detailed. Is it any wonder you’re conflict avoidant with? There’s no conflict resolution to be had with these individuals. Additionally, their conflict style is so toxic it’s only natural you seek to avoid them when they’re spoiling for a fight.

When they’re itching for a conflict, don’t ask them about their victim-y feelings. Unless, of course, you enjoy spending hours  in that endless hellscape. Asking them about their feelings is like throwing a bucket of chum into shark-infested waters and then diving in without a shark cage or one of those spear gun thingies.

Furthermore, don’t argue the veracity of their grievances. I know it’s difficult to resist the natural urge to JADE (justify, argue, defend, explain). Especially when the falsehoods flying out of their mouths are egregiously absurd. Instead, offer them three solutions that you can live with.If they refuse to choose one, then you can decide. If they don’t like it, tough beans.

If their grievance is, “You’re a horrible person! You never loved me!” there’s no solution to that. It’s also not something you can prove or disprove. Providing a laundry list of all the things you do for them or all the crap you tolerate becomes more moles you’ll need to whack. Just walk away. And then consider how much longer you want to play this game. A game you can only win by not playing.

Characteristics of not fighting fair.

To summarize, with high-conflict people the stated issue typically isn’t the issue. The real issue is, as ever, their personality (disorder). They’re bored, attention-seeking or victim-playing. Sometimes, they want to punish the person (i.e., you) whom they believe has wronged them, ignored them or made them feel bad about themselves. And what makes them feel victimized? Holding them accountable, having boundaries and using facts and logic.

In my experience, kitchen sinking usually happens when the narcissist or borderline isn’t able to defend their actions with double-speak, DARVO ( i.e., claiming the role of victim or injured party), reversing cause and effect regarding their behavior or emotionally overwhelming their partner via rage, crying or pouting. In order to distract from the original conflict — either initiated by you or because you used reason and facts to disprove their claims — they bring up old and new grievances. Hence the comparison to Whack-a-Mole. Just as you prove your point, they launch new complaints.

Why do narcissists and borderlines kitchen sink?

There are several reasons why these individuals kitchen sink:

1. They’re not interested in conflict resolution. When conflicts, disagreements and hurt feelings aren’t resolved, they get stored in the Resentment Warehouse™. With each new conflict past resentments are recycled. Particularly, if you have a new grievance or issue. “Oh yeah! Well, what about the time you . . . !”

This is so unhealthy. Resentment is corrosive and eventually turns into contempt. There’s no coming back from contempt in a relationship. According to John Gottman (imago therapy), contempt is one of the four horsemen of a relationship apocalypse. (The other three are criticism, defensiveness and stonewalling. (Ad lib that this is characteristic of all relationships with the personality disordered.) Kitchen sinking keeps all the old resentments alive and “fresh,” thus, maintaining the narcissist or borderline’s victim status.

2. They want to win. For many narcissists and borderlines, fighting is about winning. Sometimes the fun is in bullying or haranguing you into agreeing with something you both know is nonsensical. When fighting with someone like this this, the more right you are the more wrong you are. Let that sink in for a minute. The more sensible your argument, the more incomprehensible their argument.

There’s no way to legitimately counter or win an argument based on reason, facts, evidence and logic. So what do these individuals do instead? They rage, pout, bully, cry, threaten, silent treatment and victim posture until you concede. Kitchen sinking is an effective way to wear you down and wear you out. Ta-da! They win!

3.They want to keep you engaged. Endless, circular arguments and kitchen sinking keep you engaged. If you’re still fighting with them, then you’re not divorcing or breaking up with them. Kitchen sinking is effective in this respect. Remember, this kind of conflict is their “normal.” It’s incredibly abnormal, unhealthy and destructive, but it’s how they emotionally engage.

Furthermore, when you’re not actively in conflict, you probably spend an inordinate amount of time preoccupied with how to avoid yet another conflict. In reality, this is an indirect form of engagement that, again, keeps your attention on the adult toddler. Your time would be better spent understanding why you tolerate such toxic nonsense and formulating an exit strategy.

4. They want to avoid being held accountable. Kitchen sinking is a great way to derail and tangent during an argument via distraction. Derailing usually occurs when you’re making progress defending yourself or your point. Then, the narcissist or borderline peppers you with hot button topics (e.g., all you care about is work, you’re a bad dad, she does EVERYTHING, your mother, you’re cheating and are secretly planning divorce, etc.) When this occurs, objective reality is irrelevant. You’re deep in subjective emotional reasoning land now, and it keeps escalating until you forget the original conflict, concede and apologize.

Tangenting is a less explosive form of derailing, but with the same end result. The subject is changed to other issues that are marginally related (rather than completely unrelated topics in derailing). The adult toddler then refuses to return to the original issue when you try to redirect. They accuse you of avoiding the issue or being controlling, which becomes another tangent issue. She or he does this without a trace of irony.

It’s highly unlikely that you’ll be able to resolve a conflict with a person who believes their subjective “truth” instead of verifiable, objective facts. How can you reach an equitable resolution with a person who thinks compromise is the new C-word and that all interpersonal interactions are zero sum games? Finding mutual resolution with someone who experiences win-win as crushing defeats is impossible. You can force it via mediation or the courts. But anytime there’s a forced equitable solution, narcissists and borderlines feel victimized.

You can’t win playing by the narcissist’s or borderline’s rules. So how do you win?

Drop the rope, let go of the need to prove you’re a good boy or good girl to someone who’s determined to “win,” even if it’s destructive to themselves, to you, to the children and to the relationship. That’s how you win a game of Whack-a-Troll. You don’t play. Or, you can keep playing by the narcissist’s one-sided rules. It’s better to redefine winning, which likely means losing the relationship and taking your life back.

If you’re still in the relationship and trying to preserve what’s left of your sanity, redirect back to the original issue when she or he begins kitchen sinking. If they defiantly persist, walk away. It’s hard to win a war on multiple fronts. Hence the multiple conflict points. Kitchen sinking is like a baseball pitching machine gone berserk. Until you’re ready to exit the relationship, I recommend investing in a helmet and a reinforced steel cup. They’re more practical than being more tolerant, loving and patient — or trying to argue your point.