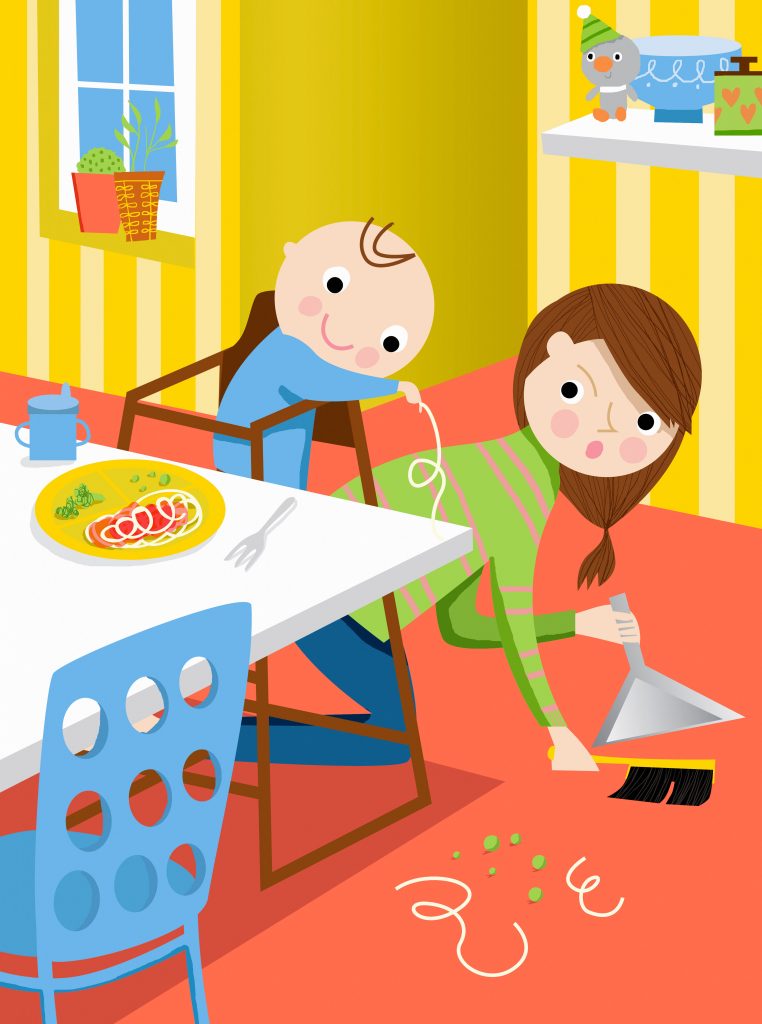 Why can’t she just stop? Why does he keep doing this? I don’t even know what the arguments are about half the time anymore. We keep going around and around in circles. Just as things seem to be calming down and we’re getting to a good place, she or he starts back up again. I’m just so damned sick and tired of this.

I’ll bet your tired. Being in a relationship with an emotional toddler, which is how many adult narcissists, borderlines, histrionics and psychopaths behave, is exhausting. You’re in High-Conflict Hell. That’s where narcissists, borderlines, histrionics, psychopaths and other toxic, emotionally immature and unstable personalities never seem to tire of pointless arguments, tantrums and the weekly Dramapalooza. Do you know why you’re tired?

If you’ve ever spent time with babies and toddlers, you’re sure to have played the isn’t-it-so-much-fun-for-toddler-to-throw-their-toys-spoon-food-or-plate-on-the-floor-and-watch-grown-ups-scamper-on-the-floor-pick-it-up-and-give-it-back-so-toddler-can-throw-it-on-the-floor-again-until-the-grown-ups-decide-that’s-enough-of-that-game. It’s so much fun! Well, it’s fun if you’re 29-months old. It’s not so much fun if you’re an adult. Sure, it’s fun to watch the child’s excitement as they learn about cause and effect. Baby throws spoon to the floor; mom picks up spoon. Toddler throws food on the floor; dad cleans up the mess and gives toddler more food. Baby throws toys out of the pram; Auntie T-T says, “Hey [insert friend’s name], it’s time for you to take your kid back!”

Kids of a certain age don’t tire of this game. Typically, they’ll keep it going until the adult stops handing the toy back or decides baby is done eating and out of the highchair they go. Nevertheless, it’s fun for baby each and every time. Most adults, on the other hand, get tired of the drop it-pick it up-drop it game fairly quickly. Why do babies and toddlers get a thrill out of this? One, it’s a form of interaction and engagement. Your eyes are on them and you’re giving them your attention. Two, they’re experiencing cause and effect. “I do this and it makes the big person crouch down and pick up my toy, so I can throw it again.” Wheeeeeee! This is one of the first ways kids are able to exert power and control, that is, when the adults participate in it. Some toddlers, once mom or dad (or Auntie T-T) decide they’ve had enough, may become pouty, angry or cry.

They still want your attention. And, while I don’t know for certain, I imagine the power of doing something that mobilizes adults like they’re marionettes when you’re confined to a highchair, crib, playpen, car seat, etc., and can’t do much for yourself because you have an underdeveloped frontal lobe, motor skills and muscular-skeletal system is probably about as exciting as seeing a life-size Mickey Mouse at Disney World.

If you’re in or have been in a relationship with a high-conflict narcissist or other toxic personality, you’ve probably experienced something similar. Except, instead of throwing toys they make outrageous and untrue allegations. They take, break or hide your phone. They lob insults and sometimes throw punches. “I know you’re cheating on me! You hate me! You don’t love me! I’m divorcing you! You care more about work than you do about me or this family!” Sometimes, these episodes have known triggers. For example, you want to go fishing with your father instead of sitting at the house while she attention seeks on Facebook. Or, you want to go see your friend’s band perform and he pitches a tantrum because [made up reason] and decides your punishment is that he won’t accompany you. Of course, you’re expected to forgo the concert and stay home and atone for whatever bullshit reason he made up to be an asshole rather than acknowledge the real reason — some of your friends see through him and he doesn’t like feeling exposed.

Sometimes, these episodes seem to come out of nowhere. Whether they occur because you didn’t answer their 47th text message of the day because you were on a ladder at the job site, or they’re bored and restless and want to feel the buzz of sympathetic nervous system arousal (fight or flight), the outcome is the same. The narcissist or borderline gets your attention. They experience the thrill of pushing your buttons and the omnipotence of you apologizing to them for the conflict and drama they created. If you don’t understand what’s going on — namely, that you’re dealing with an adult toddler — it’s easy to become destabilized and allow yourself to be sucked into Crazytown.

This is often especially the case when they spew untrue “you always-you never” accusations or claim they know what you feel and think when they’ve no idea at all. That’s when many codependent and trauma bonded people fall into the trap of JADE-ing (justify, argue, defend, explain). Once you begin justifying, arguing, explaining and patiently going through the factual minutia, you’re in the High-Conflict Fun Zone until you admit fault. The fun and games aren’t over until, the narcissist is declared the winner and they almost always declare themselves the winner. Either in the moment or when they rewrite history an hour or a week later. Even when they claim themselves the victim, that’s still a win. If they’re the victim (of the argument they provoked), then you’re supposed to feel guilty and obligated to make it up to them. That’s power.

Sometimes, people who’ve been diagnosed with borderline personality disorder email or try to post comments chiding me about lumping them together with narcissists and psychopaths. Often, they’ll admit that, yes, sometimes they purposefully and spitefully hurt people, but that’s because they’re hurting and have too much empathy (you know the ability to put oneself in another person’s shoes and have compassion for them instead of hurting them). I guess that, in their minds, that makes them better than narcissists or psychopaths? No idea. In any case, there are some differences between why narcissists and borderlines create conflict and chaos, but the outcomes are very much the same. Abuse is abuse. The reasons why, ultimately, don’t matter.

Some of the similarities include the adrenaline buzz of sympathetic nervous system arousal, which has addictive properties. These individuals are often restless, easily bored and lack the ability to self-soothe. Drama and pointless conflict alleviates that boredom. Typically, their targets try to calm them down or soothe them when they’re going berserk. Both personality types have an insatiable appetite for attention. Actually, they’ll often ignore you, then, when they see you’re engaging in an activity that doesn’t involve them, that’s when they want your attention and you’d better drop whatever it is you’re doing and give it to them.

For example, toward the end of the relationship with my narcissistic ex, he started a new game. Part of his false self is that he’s a creative genius and pianist. In reality, the man has memorized approximately a dozen or so pieces by Scott Joplin and Frederic Chopin and one by Rachmaninoff because, and I quote, “The Rachmaninoff song really impresses people.” He can’t sight play when reading a new piece of music and he can’t improvise. Just the songs he memorized in high school in an effort to get laid. For seven and a half years, I listened to him periodically ham fist his way through the same dozen songs or, what I privately called the Choplin Repertoire. He blamed me for not playing well because he claimed he couldn’t practice with me there. Not true. I encouraged him to play and even offered to buy him lessons as a birthday present one year (partly because I thought he might actually want to learn and improve since he claimed the piano was so important to him, and partly because I was tired of hearing the same 13 songs over and over again).

The last 6 months we were together, I started listening to music in the kitchen while I prepared dinner. In the past, he’d just be sitting in his chair Facebooking while I cooked. And then, it was time for a new game. Within 30 seconds of turning on my iPod, he’d sit down at the piano and it was ragtime time. I’d power down the iPod, offer encouragement, “Wow, that sounds great,” and then serve dinner during which he’d read a magazine and ignore me (I know, I know — I can’t believe I put up with it either). After a few weeks of this, instead of shutting off the iPod when I’d hear the opening bars of a rag I’ll likely never get out of my head, I popped it in my pocket and used my earbuds. When he discovered what I was doing a few days later (listening to my music while he played), he had quite the tantrum. He accused me of not letting him practice. His ex-wife used to stop him from practicing, too! I asked, “How is me listening to Steely Dan using earbuds in the kitchen preventing you from practicing piano in the living room?” Pouty McPout-Pout didn’t have an answer for that and stomped off into the living room to fume, sulk and glare at me through the kitchen doorway over the top of his computer.

How is that really any different than a baby throwing their sippy cup on the floor repeatedly and having a fit if mommy or daddy doesn’t pick it up?

The differences between why narcissists and borderlines play the pointless conflict game are different. It’s about the different core wounds their respective false selves protect. Narcissists want to feel powerful, important and special. They’re terrified for being seen for what they really are — scared, petulant, inadequate, needy children. Creating conflict and drama gets them attention, they feel powerful (they make the rules and don’t stop until their victims comply, concede or admit that everything is their fault). Their entitlement needs are fed because you’re required to make it up to them until they decide you’ve done enough (that rarely happens, by the way).

Borderlines also want to feel important and special and require inordinate amounts of attention. However, they’re terrified of abandonment. Conflict and drama are a way to keep their victims engaged. If you’re fighting with them and focused on putting out the proverbial fires they set and doing fire prevention, you’re still in the relationship. You’re also typically too stressed and exhausted from myopically walking on eggshells to stop and ask yourself why. Most of us don’t think to ask ourselves that question when we’re in permanent crisis prevention mode. Yet another reason for the near constant chaos, drama and conflict. It’s a smokescreen within which the narcissists hides and pulls our puppet strings.

You may recognize both of these fears in your partner, ex, parent or sibling. That’s not uncommon. Many borderlines have narcissistic traits and vice versa. My advice is don’t get hung up on trying to sort that out. It’s more important that you sort yourself out. Why are you playing a game you can’t win with an adult toddler who will likely never tire of the game? Aren’t you tired yet? Haven’t you had enough?