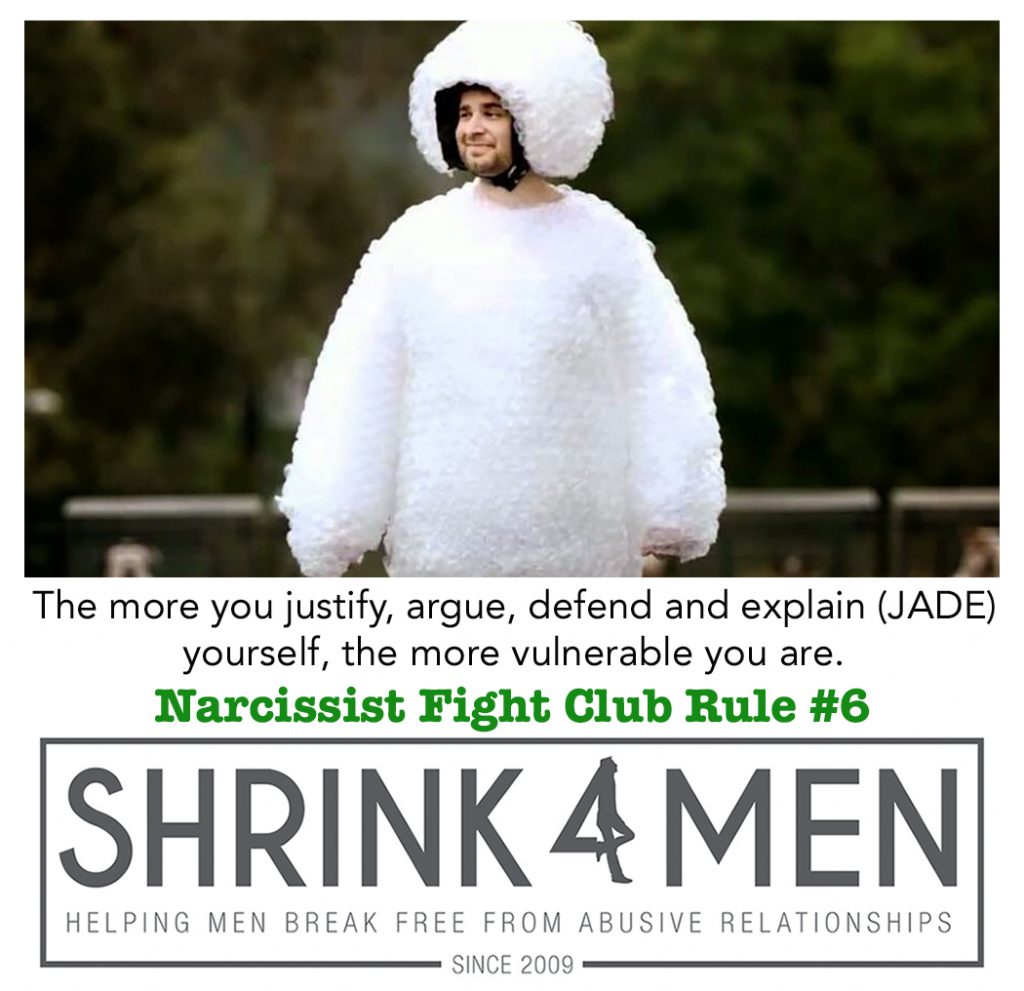 Arguing with narcissists, borderlines, psychopaths and other emotionally immature and unstable personalities is usually a pointless exercise for several reasons. First, narcissists aren’t interested in equitable solutions. They want to “win.”

In my experience, they’re the most determined to win (i.e., punish you), when they’re objectively wrong. They take perverse pleasure in getting others to admit up is down and day is night. Winning is about being in control and wielding power. The thrill isn’t in persuading, but coercing or taking something valuable (material or emotional) from you.

Winning helps the narcissist protect their false self. The narcissist’s false self masks their core wound of feeling unloved and inferior. Borderlines typically create conflict and drama to ward off fears of abandonment. If you’re engaged and fighting then you’re still in the relationship. Sometimes these individuals create conflict because they simply enjoy it, or to alleviate boredom.

Second, conflict, chaos and drama are juicy sources of attention. Attention is attention is attention. Good attention, bad attention — it makes no difference. Actually, now that I think about it, good enough parents give their children more attention when they behave well. Praising and encouraging kids’ positive behavior helps them internalize a sense of pride and a desire to become model citizens. In this respect, pride in social and interpersonal responsibility becomes self-reinforcing. In other words, as we grow and mature into adolescence and adulthood, we shouldn’t require gold stars for making our beds, washing the dishes, being honest and doing our own work.

Not so with narcissists, borderlines, psychopaths and other chronically immature, integrity-challenged people. They expect gold stars on the infrequent occasions they help with household chores and other daily life skills most grown-ups do as part of being a responsible adult.

For example, my narcissistic ex wanted praise for putting his empty beer bottles in the recyclable bin. Most of the time, he’s leave them on the kitchen island one-inch from the waste bin. His refusal to tidy up after himself is one of the two reasons I bought a commercial grade kegerator. One, beer tastes better fresh from a keg and, two, there was less of his mess to clean. Win-win. Why he couldn’t make the minimal effort to press the Simple Human pedal to open the trash receptacle, I’ll never know for certain. Most likely it’s the narcissistic expectation that the mommy or daddy figure clean up his or her nib’s mess. The point is a mature adult shouldn’t require a medal for managing their refuse.

More mature adults receive attention or praise when we go above and beyond, not for mundane daily life activities. Thus, for adult narcissists and borderlines, it’s easier to get attention for acting out than for acting right. Or, for prodigiously posting selfies on Facebook, Twitter and Instagram. Because who gives a 38-year old lavish praise for tying her own shoe laces? Not that a 38-year old narcissist doesn’t expect it!

Then again, I’ve seen grown adults post Facebook updates that they “finally cleaned their house” with flurries of Likes in response. Never mind.

Apologies for the detour. Let’s return to the main topic.

Third, conflict is gratifying to narcissists if you respond with an emotional reaction of hurt, frustration, incredulity or anger. If you do so, they then flip it around and play victim. A client and a Shrink4Men Forum member each created flow chart diagrams illustrating the mechanics of this particular phenomenon. You can find the diagrams here (Conflict Resolution Flow Chart of Narcissists, Borderlines, Histrionics and Psychopaths) and here (High-Conflict Phases of Abuse, Blame Shifting, Distortion, Rage and Manipulation Diagram).

The first 4 rules of Narcissist Fight Club are:

The fifth rule of Narcissist Fight Club is the more you justify, argue, defend or explain yourself (JADE), the more vulnerable you are. When you have a misunderstanding, disagreement or conflict with an emotionally mature person, explaining your rationale, point of view or clarifying inaccurate information can be very helpful in resolving the issue. Mutual understanding is supposed to be helpful when resolving conflict and negotiating compromise. Not so with narcissists and other high-conflict people. Remember, they want to win. They don’t consider a win-win situation winning. Narcissists only play zero sum games. In other words, in order for them to feel they’ve won, someone else has to lose.

Typically, explaining yourself, your feelings and correcting falsehoods during a conflict with a narcissist backfires. It frequently results in an escalation of conflict. There are several reasons for this:

2. Facts are irrelevant and incendiary, especially if the facts disprove what the narcissist or borderline is arguing. These individuals can’t regulate their own emotions, therefore, don’t expect them to be able to cope with your feelings.

3. Lack empathy. Some borderlines claim the reason they act out and abuse others is because they have “too much empathy.” This is ridiculous backwards reasoning. Having empathy promotes compassion and understanding. It doesn’t cause a person to abuse others.

4. Explaining yourself is the act of a subordinate. It’s the canine equivalent of assuming a submissive position, signaling fear and a willingness to please and appease. When you justify and explain yourself, it only reinforces the sense of power and control they derive from pointless conflict and bullying. So, if you want to guarantee more conflict about nothing, rage episodes, baseless accusations, arguments at midnight and silent treatments, then by all means keep JADE-ing.

5. The more accurate and factual you are in the face of the disordered person’s emotional and circular reasoning, the angrier and more abusive they’re likely to become. They don’t stop until you concede that their lies and distortions are “real” and apologize. When you JADE with someone who believes their subjective emotional experience trumps all, there’s no reasonable discussion or resolution to be had, so why engage in the conflict at all?

Sure, you can try reflective listening (e.g., “So you’re saying you feel [restate the issue] . . . “), but exploring a disordered person’s emotions is like wandering into an alligator-infested swamp at midnight without a compass and a bleeding gash on your thigh. Offer them solutions to whatever the issue is. If they don’t want a solution you can live with, disengage. Yes, you’ll then be accused of not caring, being unemotional or mean, but what does it matter? You’re going to be accused of that regardless of what you do, so detach and disengage.

6. JADE-ing gives your abuser information with which to more effectively manipulate and abuse you. They manipulate through FOG (fear, obligation and guilt). Explaining your feelings and perspective helps them to abuse you more intelligently. You don’t have to justify telling the narcissist no or explain why you find their behavior abusive and unacceptable. When you do that, you open the unacceptable up for negotiation. The more voluminous defenses you make, the more material you give them to cherry pick and twist. It’s especially important not to do this during divorce and custody litigation.

7. JADE-ing is a role reversal. Explaining yourself to a narcissist or borderline boils down to a few things. You explain why their hurtful behavior is hurtful. You explain why you would like to have normal things in the relationship like respect, trust, no name-calling, mutual consideration, etc. And, many clients find themselves explaining what decent, reasonable adult behavior is to their partners or exes. Stop doing all three of these things. These individuals know how to behave properly. If they’re high functioning, they likely do so quite often outside the home with people who aren’t you.

Narcissistic and other entitled personalities typically don’t feel the need to explain anything. At best, they’ll make lame excuses to justify their deplorable or egregiously selfish, irrational and immature behavior. “I can’t help it.” “I hurt you because I’m hurting.” “If you didn’t x, y or z I wouldn’t have to be like that.” “Only you bring this out in me.” Or, some individuals who’ve been diagnosed use their diagnosis not to be held accountable for their behavior. Stop arguing with Crazy. Inevitably, arguing with Crazy will make you crazy.

8. The stated issue with a high-conflict personality disordered individual is not the issue. The real issue is, always has been and always will be their emotional immaturity, instability and personality disorder. Fears of abandonment, losing control, feeling inferior and fear of public exposure are the most common drivers. For example, you return from a social outing soaking wet:

NPD: Why are you wet?
You: There was an unexpected downpour 45 minutes ago. Didn’t you notice?
NPD: You’re so irresponsible. Look at the water you’re getting on the floor. I’m so sick of this. You’re so stupid. Why didn’t you check the weather report before you left?
You: I did. I told you. It wasn’t in the forecast.
NPD: You’re always making excuses for yourself. Be a man for once in your life!
You: Why are you so upset? I didn’t get rained on on purpose.
NPD: I’M NOT ANGRY!!!! QUIT TELLING ME HOW I FEEL!!!!!
You: But you’re shouting . . .
NPD: I’M NOT YELLING!!!!! See! You always do this!
You: Do what? I don’t understand.

And around and around you go until you apologize for getting caught in a cloudburst that wasn’t predicted by Accu-Weather. What was the real issue? The narcissist was angry because they had to do the breakfast dishes while you were having lunch with your sister. You weren’t there when they needed you to do a menial task like cleaning up after themselves. Why are you still with this person?

If you’re still communicating with a narcissist, borderline, psychopath or histrionic abuser, don’t JADE yourself anymore. That puts the focus on you instead of where it belongs — on their behavior. If they don’t want to own it like a mature adult, or deflect it or project it back onto you, game over. There’s no discussion to be had because they don’t want an amicable resolution, they want to win. The only way for you to win (i.e., not be abused and have peace of mind) is not to play zero sum games with narcissists, borderlines, psychopaths and other abusive personalities.