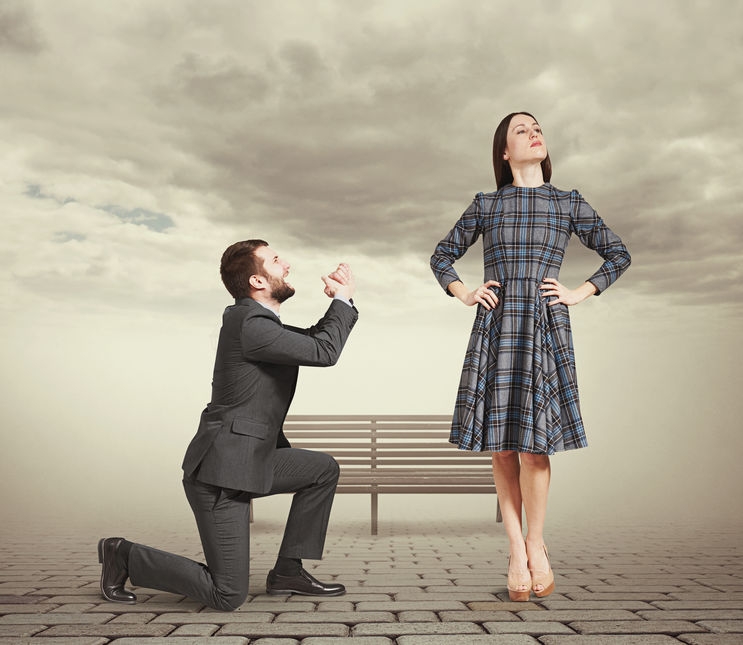 This dynamic is incredibly unhealthy and doesn’t lead to a loving, mutually satisfying relationship. This kind of relationship may last for decades, but it will likely be a source of unrequited longing and misery with infrequent moments of illusory emotional attunement. In other words, the intermittent positive reinforcement common in toxic, dysfunctional relationships that causes the person who cares the most to cling onto hope that things might get better.

Intimate relationships have stages. There are several relationship models, but most include the following two:

The honeymoon stage is that magical time when we see our new love through rose-colored glasses. It’s common to project qualities onto the object of our affection that don’t exist and/or to idealize them. The honeymoon stage is like catching the perfect buzz. Except, we can’t stay buzzed forever. Eventually, both parties sober up and the rosy spectacles are removed.

Next comes the power struggle stage. Mutual projections are withdrawn. You see your once perfect mate as they really are, and not as you imagined them to be and vice versa. You see qualities that irritate you and vice versa. You notice their quirks, insecurities, habits and other oddities and vice versa. If you both find your respective quirks and differences tolerable (no one’s perfect!), or even charming and endearing — fabulous!

In a healthy relationship, partners learn to share power. Both individuals seek mutual wins and support one another. What’s good for the relationship is good for both partners. A healthy adult doesn’t need their partner to feel bad in order to feel good. Emotionally mature adults want their partner to feel secure, appreciated and loved. Healthy individuals who are able to negotiate the power struggle stage can go on to develop a reciprocal relationship and enduring bond.

Relationships involving the personality disordered and the codependent follow a similar, but much more extreme initial trajectory. They then become stuck at the power struggle stage until one of them dies, or decides they’ve had enough and leaves.

Relationships with narcissists and borderlines have three stages:

The love bombing stage is to the honeymoon stage as a mountain of cocaine is to a shot of espresso. Basically, love bombing is the honeymoon stage on steroids. It isn’t real and it doesn’t last. However, it can foster an incredibly strong dependency on the person who’s being drugged with flattery and adoration (usually the codependent). Inevitably, the devaluation stage begins, which is the pathological version of the power struggle stage between healthy individuals.

During the devaluation stage,  narcissists and borderlines pack dynamite at the base of the pedestal they once hoisted you upon. Then they blow it up. The realization that you’re not the perfect person (i.e., an idealized mommy/daddy replacement) they wanted you to be isn’t just a disappointment. It’s the beginning of their contempt and hatred, or the devaluation stage. When the mirroring and projection stop, they don’t just devalue you. They demonize you. Or, they become bored with you. Same difference.

You go from being able to do no wrong, to not being able to do anything right. All that flattery, affection, crazy sex and attention? That’s over. If you’re codependent, you begin the love bombing stage believing you’ve found the opposite of your emotionally unavailable, inconsistent and abusive mother/father to once again feeling like that unloved, inadequate, undeserving child.

There are three types of relationship dynamics characterized by power imbalances and power struggles. They are:

One party seeks control through criticism, complaints, or coercion, while the other seeks control through distraction or isolation. Demand-withdraw is mainly about power: Who will control whom. One partner is aggressive while the other may be passive-aggressive . . . Eventually, demanders give up, out of exhaustion, resignation, despair, or bitter contempt. At that point, withdrawers often pick up the slack with their own demands, prompting their partners—the demanders—to disengage” (Stosny, 2015).

Think of the distance-pursuer dynamic as a shifting Venn Diagram. In the love bombing stage, the two circles are one circle. As the power struggle ensues, the circles decouple and one circle pursues the other, longing for what felt like emotional attunement during the love bombing stage. The more the pursuer pursues, the more the distancer distances. The distancer wields power over the pursuer by remaining unavailable, cold or ambiguous in their affection and commitment.

In the fear-shame dynamic, one partner uses shame to have power over the other. Being told you’re an inadequate disappointment over and over can create cripplingly painful feelings of shame. To clarify the pernicious effect of shame, think of it this way. Guilt says, “I did something bad.” Shame says, “I am bad.” Manipulating a so-called loved one via shame is unspeakably cruel.

Individuals who feel chronic shame typically respond with either aggression and/or withdrawal. When the shamed lashes out in anger and/or withdraws in order to regain a sense of power in the relationship, the shamer experiences anxiety. Not necessarily because the shamed poses a physical threat, but because the shamer feels a loss of control over the shamed. The shamer then attempts to reclaim power by escalating their shaming verbal and non-verbal communication.

For example, a shaming wife tells her angry husband, “I’m afraid of you,” or her emotionally detached husband “You don’t love me!” If the husband’s vulnerable to shame, he’ll feel horrible, become conciliatory and return to people-pleasing obsequiousness. Thus, the shamer regains the power and the dynamic cycle repeats.

People who have a pattern of these relationship dynamics typically develop them in childhood. Their parents are often emotionally distant, shaming and overly critical and rejecting. Alternately, they observed these dynamics between their parents and it became their template for adult relationships. These three dynamics don’t result in mutually satisfying, happy, healthy relationships. They’re a blueprint for misery.

If you want to have happier lasting relationships, it’s imperative that you break out of the toxic relationship dynamic cycles. If your partner is unwilling or unable to do so with you, the healthiest choice is to end the relationship. It’s impossible to become healthy in a sick environment. Furthermore, any attempts you make to get healthy will likely trigger your partner’s control issues. Remember, they feel secure by holding sole power in the relationship. Sharing power triggers their childhood wounds.

And what is power in the relationship? The person who cares the least has the most power. The person who has the power won’t get hurt. Holding the power doesn’t seem to make them especially happy, however. Nor does the individual wielding the power care how badly they’re hurting their partner. At least, they don’t care enough to stop doing it.

Hoarding power by criticizing, shaming or pushing away someone who loves you, will eventually result in the loss of love and being hurt. Conversely, seeking love from someone who’s incapable of being an equal partner who refuses to share power, will eventually result in compounding those old childhood wounds of feeling unloved, inadequate and unwanted.

Emotional Attunement with Oneself and Others

Emotional attunement is the ability to hear, see, sense, interpret and respond to someone, both verbally and non-verbally. This is how we communicate to the people we are close to so that we see them, feel with them and understand their experiences. In practice, attunement is when we engage with someone else’s feelings and in that moment, they feel us and we are no longer alone but connected (All Relationships Matter).

Whomever coined the old platitude, “You can’t love someone else until you first love yourself” got it backwards. A more accurate platitude would be, “Before you can receive love from another, you must first accept and love yourself.” Many people have no trouble chasing after a romantic interest, loving and desiring them without rhyme or reason, without their feelings being returned. Languishing in unrequited anguish. These are usually the same people who run in the opposite direction — uninterested and completely turned off — when someone shows genuine romantic interest in them.

Emotional attunement should begin in infancy, with a mother or primary care giver following the baby’s emotional cues. Babies are born feeling deep emotions but lack the ability to regulate or manage the intensity and duration of those emotions. Without the monitoring help of Mother, babies are engulfed by their emotional states, including those of fear, excitement and sadness. However, when Mother is able to tune in, pay attention to these emotions and respond accordingly (meet the baby’s need), she communicates to baby that she is in sync, understands what the baby is doing, feeling and thinking. This allows baby to feel safe and secure. This tuning in assists brain development and over time teaches the baby in how to self-regulate, make sense of their emotions and thus communicate his or her needs. It is a Mother’s gift to her child, an emotional road map to decipher what they are feeling. If a child’s feelings are continually discounted, ignored or reprimanded, they will not know how to soothe, respond, or express those emotions in adulthood.”

(*The only change I’d make to the above passage is to include Father with Mother. Perhaps by “primary care giver” the author is implying Father?)

If your parents weren’t mutually attuned to you during infancy and childhood, you can become emotionally connected to yourself as an adult. You begin by identifying, feeling, working through and letting go of those old emotional hurts from childhood and past adult relationships. Give yourself the love and acceptance your parents weren’t capable of giving. This will help you to do what I refer to as resetting one’s emotional thermostat. In other words, becoming accustomed to being consistently treated with compassion, kindness and consideration in your relationships.

This can be painful and overwhelming work. It helps to have positive, safe people in your life with whom you can practice being vulnerable in order to allow true connection and intimacy. Treating yourself with compassion and allowing others to do so, will likely feel uncomfortable, awkward and strange initially. Just ride it out and go with it. Eventually, feeling consistently good in relationships will become the new norm and feeling consistently bad will become an anomaly.

Doing this work can also free you from any lingering resentment caused by past hurts. Rather than focusing on who and what has hurt you in the past, you can turn your attention to what feels good in the present. There are people who are capable of connectedness; and people who desperately want intimacy yet fear it.

If you both want and fear intimacy, you’re likely to sabotage relationships with people who are capable of deeply connecting with you and pursuing partners who are incapable of it. You can’t change, save, fix or love someone else into emotional health. You can only do that for yourself. We don’t heal the past by replaying it in the present. We heal the past by loving ourselves and making different choices in the present.  Once you do, you’ll attract and be attracted to similarly emotionally healthy partners.