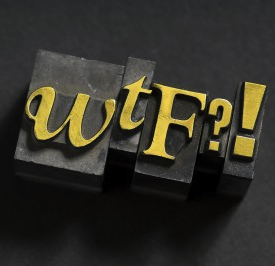 What is the WTF moment?

Oprah and her minions talk about having an “a-ha” moment or a defining moment of wisdom that you use to change your life.

The WTF moment is when the non-abusive partner, typically after weeks, months and sometimes years of love bombing, hoop jumping, guilt, manipulation, obligation, fear, self-doubt and blaming and shaming tactics, has a moment of clarity. It’s when you finally realize, “Wait a minute. Something’s wrong here, but it isn’t me.”

Having the WTF moment should be enough to help most people realize they’re in a relationship with an abusive, unstable and possibly sociopathic individual and that you need to end it. However, if you have codependency issues, rescuer tendencies, and other attachment issues, the WTF moment is only the first step of your journey to freedom and emotional health.

Most intimate relationships go through approximately 5 stages, which include:

The WTF moment typically occurs during the second stage, the power struggle. Most relationships with abusive personalities don’t seem to progress past the third relationship stage of re-evaluation and identity formation, no matter how long the relationship remains intact.

During the first relationship stage, the honeymoon, you tend to view a new love interest through rose-colored glasses. It’s a time of infatuation and mutual idealized projection. Their idiosyncrasies are cute and attraction and passions run high. You focus on all the ways you’re alike and ignore pesky differences.

You may have unrealistic expectations that your new love will be able to meet all your needs and desires and vice versa. Biochemically, your brain is awash with dopamine, testosterone and endorphins, which elevate mood, increase sexual desire and create an overall sense of well-being. In other words, you may not thinking straight nor seeing things and each other as you are in reality.

You may focus exclusively on each other to the detriment of other relationships. This is when a sense of “we” develops and boundaries may become diffuse. There’s often lots of laughter, flirtation, playfulness, sexual desire and a compulsion to reveal everything about yourself to your love interest and learn everything about her.

The honeymoon phase is temporary and lasts anywhere from 2 months to 2 years. If a strong enough bond develops during this period, a couple is more likely to be able to ride out the power struggle stage.

Many relationships don’t last beyond the honeymoon phase, however. Some people are more in love with falling in love than they are with the actual person. They seem to be addicted to the feel-good sensations, novelty and other blissful illusions. They lose interest and move onto the next person who makes their hearts go pitter-pat after the idealization and positive projections stop and the rose-colored glasses are removed.

If you have a history of becoming involved with abusive, sociopathic, high-conflict and/or personality disordered individuals, the honeymoon stage is the most dangerous time for you. This is when you have the “good times” that you cling to later. Emotional predators add to the to the idealization and mutual projections by intuiting what your needs, desires and fantasies are and giving it to you. It’s when you’re the most vulnerable to love bombing and other high-pressure tactics to make a binding commitment.

Warning signs and other red flags are often minimized, rationalized away or ignored during this stage. The good feelings, intense sex, pleasing behaviors and adoration can be so powerful and addictive that it may make it very difficult for you to end the relationship once you have the WTF moment and see behind your abuser’s mask.

Once you enter the FOG of fear, obligation and guilt, you long to go back to the pink cloud of the honeymoon phase, but that never happens. You may see glimpses of the honeymoon behaviors if your abusive partner senses you’re about to make a break for it. This is often when the abuser tries to hoover you back in by engaging in many of the same behaviors she used to reel you in during the honeymoon stage.

The hoover is temporary. It is nothing more than a tactic to avoid abandonment and/or to get you back under the abuser’s control.

The second relationship stage is the power struggle phase, which can last indefinitely. Your brain chemistry returns to normal and disillusionment, disappointment and conflict may arise. It’s when reality hits the fan and is when the WTF moment is likely to occur.

Many of the positive attributes you both projected onto each other are withdrawn and you see each other more clearly. This is when the negative projections begin if you’re involved with an abusive personality. In other words, you stop being the most wonderful man ever, and become the recipient of her twister-roo “You” statements.

You’re selfish. You’re insensitive. You’re angry. You’re mean. You’re a cheater. You don’t care about anyone else’s feelings except your own.

She projects her negative qualities and misbehaviors onto you and expects you to carry them for her. This is when you may both look at each other and exclaim, “You’ve changed!”

The reality is most people don’t change. You’re the same. Maybe you’ve started leaving your dirty underwear on the floor or started to drink directly from the milk carton again, but you’re still pretty much the same guy you ever were. An abusive personality, however, does change.

The fantasy Dr. Jekyll personality diminishes and Ms. Hyde surfaces and takes up residence. For example, the intense sex and pretending to be interested in football stops, and Nasty McCrazy comes out to play.

As your real identities emerge and your differences become apparent, problems arise. An abusive personality often sees these differences as a betrayal and/or a personal attack. Instead of adapting and realizing that everyone has little quirks and irritating habits, she will punish you for not living up to her fantasies and not meeting all of her physical and emotional needs.

Many couples break up at this point if their differences can’t be resolved. Other couples ignore their differences and engage in distancing behaviors, which may foster resentment. Alternately, an abusive partner may begin the process of bullying you into submission.

This is when the struggle for control over you begins in earnest. For example, an abusive partner sets forth an unending series of hoops for you to jump through with the empty promise that she’ll go back to the person she was during the honeymoon phase if only you can successfully jump through all of her hoops and navigate her shifting landmines. Sadly, many men and women fall for this lie.

If you’ve coupled with a healthy individual, this is when you start to merge your friends and families. If you’re with an abuser, this is often when she will try to isolate you from your support system.

For a healthy couple, this stage is also when the real relationship work begins. The partners learn how to adapt, to build trust, to listen, to solve problems, to resolve conflict, to make compromises and appreciate one another’s differences — or at least accept them. In this respect, the conflict during this stage is healthy as both partners figure out their roles in the relationship and helps them separate from the enmeshment of the honeymoon phase.

High-conflict, abusive and/or sociopathic personalities aren’t capable of compromise, give and take, and conflict resolution. It’s her way or there’s hell to pay. This is the stage when the abusive personality’s control issues become evident. Minor differences and disagreements elicit disproportionate rage or emotional withdrawal. Blaming and shaming tactics start and then it hits you.

Please check back next week for part two.