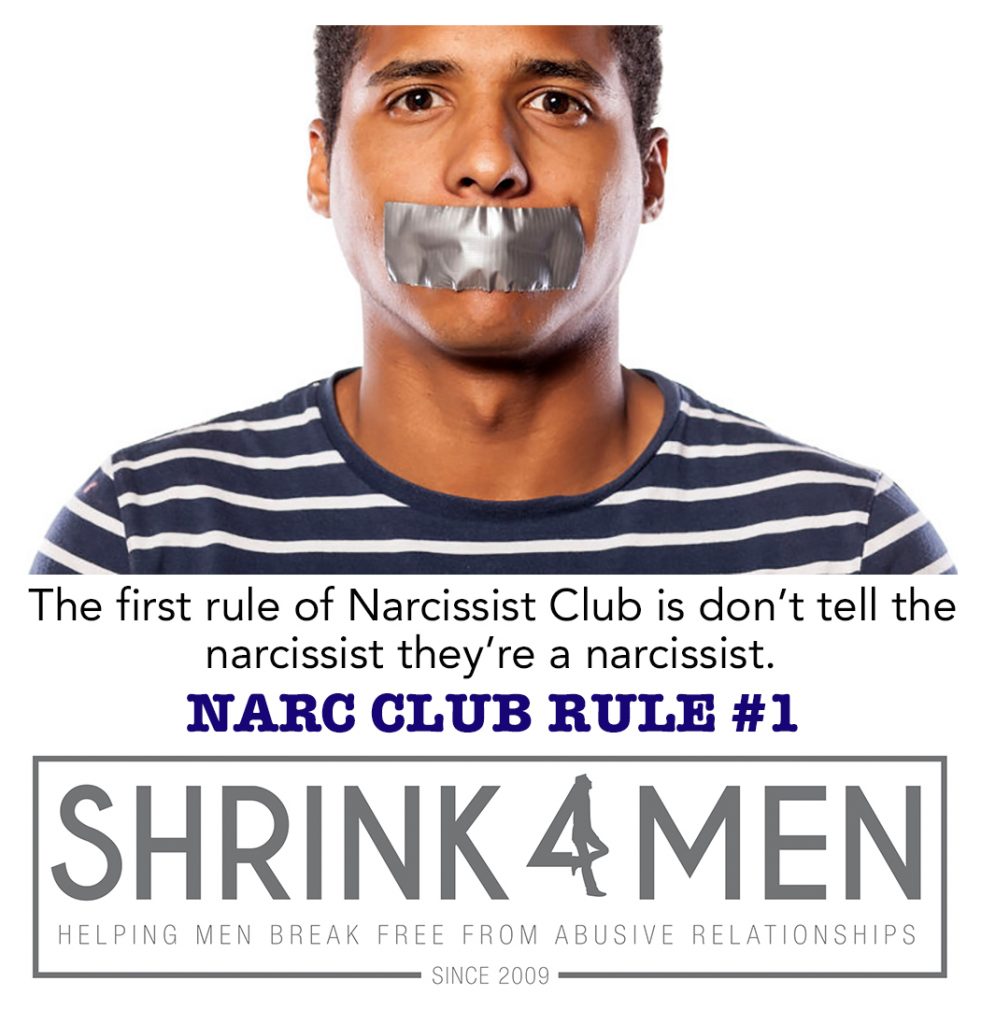 Many people in relationships with narcissists, psychopaths, borderlines, histrionics and other personality disordered abusers often find themselves living by a set of rules, spoken and unspoken, determined by their abuser. Narcissists don’t force their victims to live by these rules. Adult victims comply hoping to preserve the relationship for a variety of typically misguided, unhealthy reasons stemming from fear, obligation and guilt (FOG). For example, you fear losing access to your children. You don’t believe anyone else will be attracted to you. You’re replaying family of origin issues in which the people who claim to love you abuse you. You feel obligated to stay with your abuser and guilty about leaving.

Healthy relationships also have rules. However, they’re out in the open, reasonable and in the interest of and agreed to by both parties. Dysfunctional relationship rules share none of these attributes. Abusers like to win. In order for the narcissist to feel that they’re winning, someone else has to lose. They’ll scheme and bully to ensure they’re always the winner (or appear to be the winner), even if they eventually lose the relationship. Leaving the relationship doesn’t necessarily automatically free you. If you’re married and share children, they’ll then devise destructive, one-sided rules for divorce and custody agreements. They’ll do their damnedest to continue their tyranny post-divorce if enabled by the court. Even when the courts don’t enable the narcissistic or borderline ex, it’s up to you to create and enforce boundaries if you no longer want to live by the their rules.

These rules typically don’t surface until after the narcissist, psychopath, histrionic or borderline has secured the relationship, after the love bombing and idealization stage has ended. Did I mention these rules ensure that you can never, ever win? The only win to be had is in ending the relationship and getting your life, your sanity, your health and yourself back. Many abuse victims aren’t aware of the rules at first. Because they’re often covert, you discover them as you stumble upon the narcissist’s trip wires. Many of you, in an effort to understand what you’re experiencing, turn to Internet search engines that lead you to sites like Shrink4Men. Finally, things start to make sense! Then you consider sharing this information with your abuser. 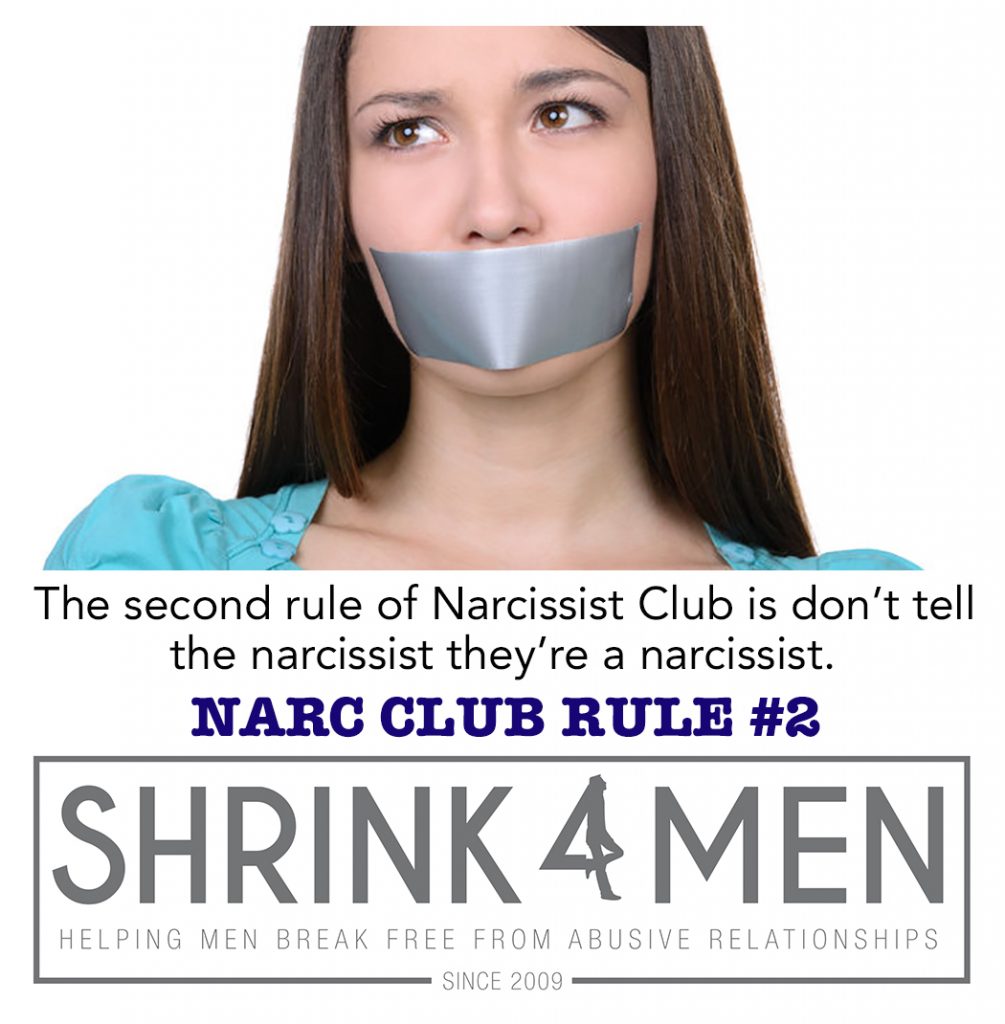 Have you not been paying attention in your relationship up to this point? You know the rules by now, don’t you? Do you think this information is going to change anything for the better? Really? Let’s start with the basics then.

There are several reasons people make this tactical blunder. One common reason is wishful thinking, “If my spouse is diagnosed they’ll finally get help and become a totally different person.”  What many victims really want is for their abuser to love bomb them again. That isn’t about your partner getting better, it’s about returning to Fantasy Land. The person who love bombed you never really existed. You fell in love with a fantasy. It’s painful to admit, but that’s the reality of it.

Identifying them as personality disordered isn’t going to help you to finally win an argument or get them to concede either. If you really understand the information you’ve read about personality disorders, you’d know why this is extremely unlikely. Using your new found knowledge as a weapon, “You borderline bitch! You narcissistic asshole!” is also a bad idea.

While weaponizing this information after you’ve been abused so very badly may be tempting and even understandable, don’t do it. How does it resolve anything? It doesn’t. It just further entrenches you in the muck with the narcissist. It also typically reinforces their professional victim narrative. In other words, they’ll turn it around on you and play the victim. It also gives them the reason (as if they need a legitimate one) to launch into another abuse cycle.

Even if you’ve convinced yourself you can help by sharing this information, it’ll likely be projected back onto you. You’ll be accused of being the narcissist, borderline, etc. Do you really think the narcissist is going to say, “OMG! You’re right! I’m a blame shifting, entitled, emotionally immature, psychologically stunted, unempathetic cretin! That’s the root of all our relationship troubles! I’ll get help now and we can go back to Love Bombing Land post haste!”

That’s not going to happen. Also, once the narcissist knows you have their number, they’ll begin working toward destroying you in earnest. Why? Because you know too much and they will protect their false self at all costs. They’ll smear and discredit you rather than risk you exposing them. Furthermore, the narcissist’s or borderline’s level of rage is proportionate to the degree of accuracy of your observations about them and their behavior. The more right you are, the more enraged and destructive they’re likely to become.

On the Facebook discussion of this article, Erika H. sums it up very well:

. . . The language of therapy and abuse is a truly effective weapon if you hand it to them. Use it to learn about yourself and identify the people and relationships that aren’t good for you, and then get the hell out and away. The shark is not going to quit gnawing your arm off simply because you have the handbook of sharks and you give it a nice education on what kind of shark you think it is and what it’s preferred prey and hunting habits may be.

If you believe your abuser is personality disordered, keep that to yourself and get help either to understand why you’re allowing yourself to be abused and/or support to end the relationship as safely as possible. Don’t print articles and leave them lying around the house where the borderline will find them. Don’t engage in circular arguments with the narcissist about who’s the real narcissist. What does arguing with a crazy person you know is crazy make you? Just as crazy or crazier. Hopefully, it’s just a case of temporary insanity for you. The path to well-being is in the opposite direction of the narcissist and the rules that serve and protect their dysfunction and pathology.