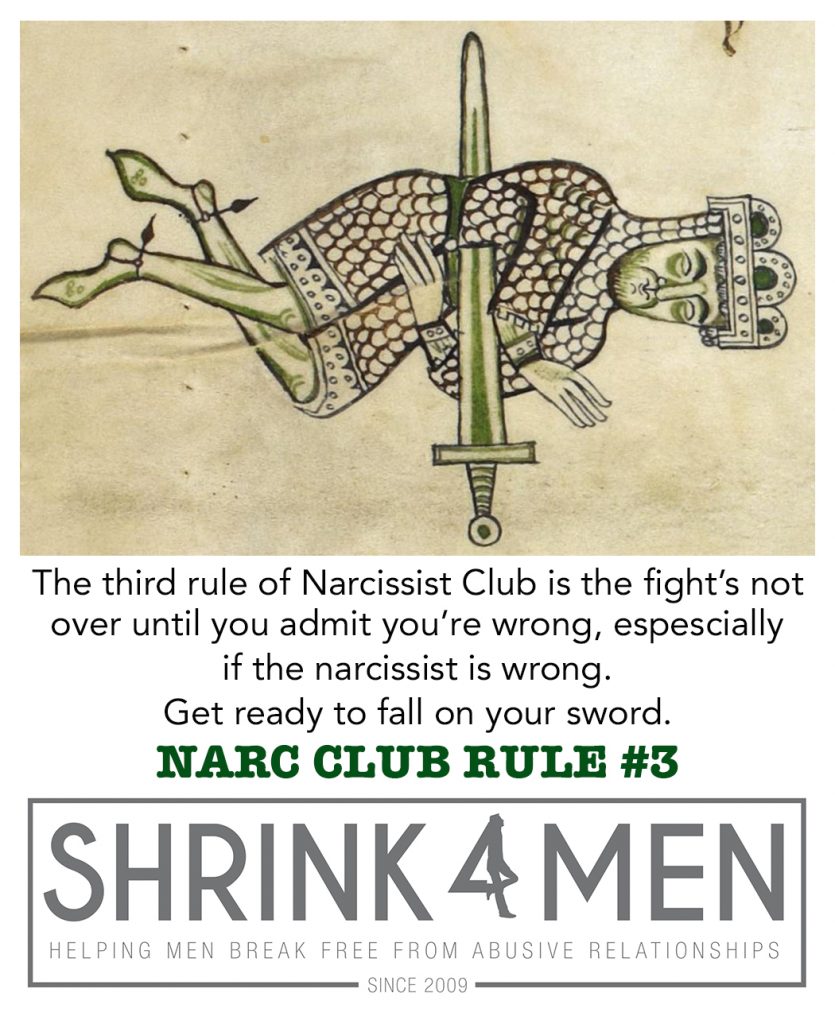 Being in a relationship with a narcissist, borderline, histrionic, psychopath or other personality disordered abuser can be a topsy turvy roller coaster ride. Mutual rules of decency, honesty, respect and reciprocity are, as far as the narcissist is concerned, optional. Or, to be more clear, optional for the narcissist. The narcissist’s or borderline’s spouse, partner, child, friend or employee are typically held to a different set of standards than the abuser holds her- or himself.

As the saying goes, these individuals live on a one-way street paved with double standards.

Narcissists often see themselves as too special to comply with relationship norms. Sometimes they even fancy themselves above the law. This is a manifestation of their entitlement.

Borderlines and narcissists both tend see themselves as “the real victim” in most interpersonal interactions. Even as they viciously abuse their partners and children. They believe they’re exempt from societal norms because of their self-designated victim status and how much they claim to suffer emotionally as a result of abusing their loved ones. Please reread the last sentence. Even when they abuse others and can acknowledge their behavior was hurtful, they still see themselves as the victim.

Their distorted un-reality is their reality.

All people, including non-disordered people, deny reality on occasion. Denial is a primitive defense mechanism and the first stage of grief. It’s basic human nature to reflexively deny painful realities. It’s much harder to avoid the consequences of denying reality, however. Unless you have a legion of enablers, flunkies, negative advocates, apologists and flying monkeys willing to protect you from the consequences of your choices, that is.

Narcissist Club Rules 1 & 2: Don’t Tell the Narcissist They’re a Narcissist, gives an overview of the one-sided, shifting rules many victims of narcissists and other abusers find themselves navigating. Choosing to live this way carries some very steep consequences, which is why it’s important to recognize and understand the mechanics of dysfunctional and abusive relationships, including the rules of engagement and how they’re tilted against you if you’re not the narcissist or borderline.

NARC CLUB RULE #3: The Fight’s Not Over Until You Admit You’re Wrong.

Once you figure out not to tell the narcissist they’re a narcissist (do this at your own peril), the next rule you must accept is that the narcissist is never wrong. Narcissists are always right and always the injured party, at least, that’s what they believe and expect you to concede. Even if they’re fleetingly able to acknowledge their behavior was hurtful, it’s almost always followed with a BUT. As in, yes, their behavior was cruel, BUT it’s really your fault because insert self-serving, cockamamie reason.

The self-manufactured drama, crises and conflicts typically won’t stop until after you admit you’re wrong and apologize for being bad, selfish and agree with whatever the narcissist’s accusation or victim narrative du jour happens to be. Groveling, begging, pleading, self-flagellation or getting on your hands and knees may be required. Especially if the narcissist or borderline rates the sincerity of your apology for “making them” rage at you, lie to you, cheat on you, spend the rent money at the casino, etc.

While apologizing and falling on your sword might buy you some temporary peace, you will pay a price for it later. Because conflicts, real ones or ginned up ones, are rarely resolved, they’re often rehashed with each new professional victim–blame game episode. When you agree with, appease or humor the narcissist’s or borderline’s distorted or patently false narratives, you reinforce their bullshit. Your appeasement apologies will be held over your head as proof that the narcissist or borderline was right before, right now and right in the future.

Some therapists who work with borderlines advise their significant others to validate the borderline’s feelings (even when they’re not tethered to reality) and not the accusations, lies and distortions. I disagree for the reasons I just stated. Many disordered individuals have difficulty distinguishing between their feelings and objective reality.

In other words, their feelings are their reality. Therefore, validating their feelings validates their disconnect from objective reality, so don’t do it.

Why do they do this? Admitting they’re wrong is a dire threat to the false self of narcissists and borderlines. Dysfunctional and abusive families are often characterized by attachment and attunement issues, toxic shame and a lack of love and other emotional resources. The children of these families thus have a limited number of developmental trajectories. In order to cope and survive, these kids develop defense mechanisms or a false self. This includes codependency in addition to personality disorders and other mental health problems.

Object relations theorist D.W. Winnicott (1965) wrote about the true self and the false self in The Maturational Process and the Facilitating Environment: Studies in the Theory of Emotional Development. Winnicott believed narcissists develop a false self in infancy as a defense mechanism to protect them from a lack of parental emotional attunement (i.e., good enough parents who respond to and meet the infant’s needs often enough for the infant to feel loved and secure). Borderlines develop a false self, too.

There’s overlap between the two disorders and a high percentage of borderlines have traits of pathological narcissism in addition to the borderline characteristics. I’m aware the two conditions are different. Nevertheless, arsenic and cyanide are both poison even though they’re chemically different.

Preserving the false self is a matter of ego preservation v. ego annihilation. It’s life or death. In order to avoid the toxic shame the false self protects them from, they do many confounding and contemptible things. That includes lying, developing a sense of entitlement and/or a victim narrative and a very rigid spider web of covert and overt, self-serving and outrageously unfair interpersonal rules. It also includes the demand that you take the blame for their abnormal and abusive behaviors.

If you want to be in a relationship with one of these individuals, you’ll be expected to roll with the punches (sometimes literal punches) and take the lumps as they come. Don’t expect any appreciation or gratitude from them in the end either. Their pathological entitlement means they believe you owe them blind loyalty and unconditional love no matter how atrociously they treat you.

Remember, they live on a one-way street paved with double standards.

Living with a narcissist, psychopath, histrionic or borderline can feel like being in the backseat of a car driven by a screaming toddler who’s wildly careening out of control. In those moments, you’ll do anything to calm the little monster down and stop the car from crashing.

You can humor them, appease them, admit you’re wrong when you’ve done nothing wrong and apologize to them for their abuse of you. It might afford you some momentary peace. But it doesn’t solve anything, at least not long-term. It has the opposite consequence of buying you more trouble later on.

My advice is to get out of the car, never to return, and leave the angry, self-pitying adult toddler to experience the reality they create for themselves and the consequences of their choices. Will they still blame you? Of course. It’s the age old question does the narcissist or borderline who’s raging and blaming in the forest make a sound if you’re not there to hear them? The answer to which is who cares if you’re not there to hear them!