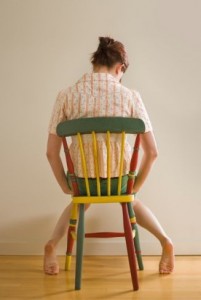 Have you ever wondered why your abusive wife, husband, girlfriend, boyfriend or ex blames others, makes excuses or rages when you question their behavior? Do they often behave like an out of control child? Does conflict feel like a pointless, circular losing battle with them, no matter how fact-based and reasonable you are?

Does she or he have an emotionally charged comeback for everything you say? Do they make legitimate counter-arguments, or just push your buttons? When you try to discuss relationship issues, do they pout and say “not fair!”

Do they take responsibility for their words and actions? Or is nothing ever their fault? Does it seem like they set traps (i.e., put you into no-win situations) during arguments? Have you ever wished you could put them in a timeout chair just like you would a toddler?

If so, you’re not alone.

Believe it or not, several of the questions just asked are adapted from a parenting article, Child Outbursts: Why Kids Blame, Make Excuses and Fight When You Challenge their Behavior, by James Lehman, MSW on EmpoweringParents.com. Clients in relationships with emotionally immature personalities often say that they feel like they’re dealing with a child in an adult’s body.

Kids will often blame others when an adult holds them accountable for their bad behavior. This is a natural reaction in children. Good enough parents teach their kids to take responsibility and face the consequences of their actions, so they can become responsible, functioning adults. If this developmental milestone isn’t reached in childhood, it creates stress and dysfunction in adulthood — for everyone involved with the individual. Several clients have observed their children surpass the disordered parent in terms of maturity, problem-solving, logic and integrity. This isn’t unusual.

“Very often children see themselves as the victim, no matter how aggressive or abusive their behavior is. Thinking of themselves this way gives them the ability, in their mind, not to take any responsibility — and if you don’t take responsibility, then you won’t have to change” (Lehman, EmpoweringParents.com). A victim mentality is the result of immature and distorted reasoning or thinking errors in troubled children and adults.

Thinking errors allow these individuals to blame others for their behavior, shirk responsibility for their actions and remain as they are — dysfunctional and chronically immature. Their distorted reasoning allows them to disregard how their behavior impacts and hurts others.

Children and adults with these issues experience others holding them accountable, no matter how gently conveyed, as an attack. Lehman recommends parents who identify these behaviors in their children break the pattern by challenging their distorted thinking, setting boundaries and enforcing consequences. Great advice.

As a parent you can make rules, enforce them and model good problem-solving skills. But what do you do when it’s your adult spouse, girlfriend or boyfriend who’s acting out aggressively and abusively? What do you do when they attack you even harder when trying to discuss these issues with them?

You can’t ground an adult or take away their car keys or credit card. Well, you could, but then she’d claim you’re trying to control and abuse her. So what do you do?

The Narcissist’s or Borderline “Problem-Solving Skills” Are the Problem.

To be blunt, these individuals have extremely dysfunctional problem-solving skills, or lack them altogether. (For that matter, so do codependents who tend to appease, people-please, avoid, minimize and/or ignore). Instead of holding themselves accountable for their bad behavior and making positive changes, the disordered shift blame, make excuses, verbally attack and vilify others and/or become physically violent.

Bullying, lying, pouting, throwing tantrums and changing the subject aren’t effective problem-solving techniques. Unless your idea of problem-solving is to get the other party to agree with you and then shut up about it.

For narcissists, borderlines et al, these are their problem-solving techniques. For rational adults, these behaviors are problems in and of themselves. They also compound other issues and are highly destructive to any relationship. There’s often a predictable sequence to how these dysfunctional behaviors play out.

For example, you confront your girlfriend with something hurtful she’s done like being rude to your family. She justifies, “I only act like that because you know your family hates me! I wouldn’t say those things if they were nicer to me!” Translation: “It’s your family’s fault. It’s your fault. I take zero responsibility. Stop bothering me.”

If you persist, she adds force and venom, “You’re not fair. You always blame me when things go wrong. Your family’s a bunch of liars. They always give me dirty looks. They hate me. You never stick up for me. You’re such a #!%@*!”

Now you’ve been warned: “Agree with me or face more abusive acting out.” She uses aggression and intimidation to get you to back down and leave her alone. This has probably been a highly effective technique she learned in childhood.

If you persist, she may then escalate to the fight or flight response because this type of person perceives criticism as life threatening: “I can’t talk with you when you’re like this! [Breaks dishes, slams door.] Screw you! [Stomps off to bedroom to Instagram men are narcissists memes.]”

When theses individuals retreat and give the silent treatment, it usually means they’ve exhausted their primitive defense mechanisms. They hurt others, break things and/or withdraw in a misguided not to solve problems, but to make the problems disappear.

How adult toddlers get problems to magically disappear? You take the blame, apologize to them for their bad behavior and then shut up and pretend like nothing happened. These are highly dysfunctional, crazy-making and abusive behaviors. They don’t resolve the actual relationship issues; they make them worse.

According to Lehman, these behaviors and distorted beliefs are indications of:

. . . their inability to communicate, their inability to solve problems and their world view that they’re a victim and ‘it’s not fair.’ If things aren’t fair, then the rules about cursing at people or breaking things don’t apply to them, because it’s not their fault. And that lets them off the hook. These kids [and adults] have a way of thinking that justifies violating other people’s boundaries and that sees them as a victim of everything. When you try to interfere with or challenge that kind of thinking, these kids [and adults] will get more upset, threatening or destructive.” (EmpoweringParents.com)

It’s a parent’s job to challenge their children’s distorted beliefs and hold them accountable for their behaviors. However, it’s not your job to re-parent your adult spouse, girlfriend or boyfriend. Even if you want to do so, you’re unlikely to be successful. Mental health professionals are unable to do this. What makes you believe you can? (HINT: Codependency and repetition compulsion).

Teaching skills like personal accountability and empathy to children at appropriate developmental stages can be challenging. Teaching these skills to adults is impossible. The best you can hope for is teaching them that actions equal consequences. And if they wish to avoid unwanted consequences, they need to reign in the worst of their impulses and behaviors. There’s a big difference between doing right because it’s right and doing right to avoid the consequences of doing wrong.

For real change to occur, the narcissist or borderline must recognize and own that they’re a big part of the problem — without making excuses — and give up their victim mentality. If they won’t do this, then they’ll continue to blame you, the world, the dog — whomever or whatever is the easiest target and stay developmentally arrested in childhood.

If only you could put these adults in timeout. However, there’s no reason why you can’t give yourself a timeout in the form of a mental health break. Like ending the relationship and seeking support for your codependency, for instance!