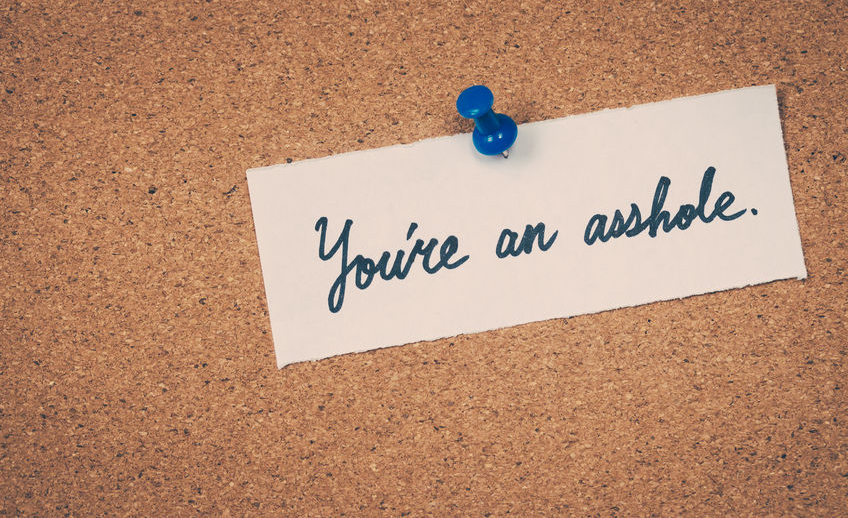 In part one of this series, I explain why co-parenting with a narcissist means being “the asshole.” To clarify, being the asshole doesn’t mean being an arrogant, controlling, unreasonable jerk. Rather, it means being indifferent to the narcissist’s opinions and feelings about you. It means practicing accountability and becoming immune to the borderline’s continued attempts to bully and emotionally manipulate you.

Again, I’m not advising you to act without integrity or a conscience. Far from it.

Remember, when a narcissist or borderline accuses you of being an asshole, it usually means you’ve stopped enabling and tolerating their bullshit. In other words, they’re angry about no longer being able to deceive, bully, control, manipulate and exploit you. Furthermore, it’s also an indicator that you’re making healthier choices, enforcing boundaries and are unfazed by their ridiculous behaviors and self-created dramas. Or, at the very least, not letting on that you’re affected by it. So, in this respect, being the asshole is a good thing!

How to be “the asshole” when co-parenting with a narcissist or borderline:

1. Let the childish name-calling and other provocations roll off your back.

Okay, do you even like your ex? Is she or he what you’d call a good person? Do you respect their choices and behavior? Are they someone you’d voluntarily choose to hang out with during your leisure time? Do you value their opinion? Or, do you employ a “whatever Nancy the Narcissist/Bob the Borderline claims, the opposite must be true until proven otherwise” rule?

I trust the answers to these questions, in order, are no, no, no, no, no, yes and yes. In which case, who the heck cares what the ex thinks about you!?! Typically, the purpose of their name-calling, dishonest accusations and melodramatic declarations of, “I will no longer be controlled by you!!!!!” (as they’re frantically and ironically trying to control you) is to get a rise out of you. So, don’t give it to them. Ignore them and their provocations. Furthermore, their accusations are frequently either projections, confessions or both.

If the ex can still get under your skin, try to appear unruffled by their antics. For example, wait at least 12 hours or more before responding to hostile messages. Then, ignore the insults and insulting insinuations. Only address relevant child issues.

2. Stop with the JADE-ing already, dammit!

Capitulating and admitting it’s your fault (whether it’s your fault or not) is typically what’s required to bring the conflict to an end. That is, until it’s time for their next feeding.

Facts are meaningless and incendiary to these individuals. Consequently, it doesn’t matter what the facts are, no matter how well you explain yourself. JADE-ing to someone whose subjective emotional experience trumps facts and enjoys bullying and harassing you into submission, is counterproductive. Ultimately, JADE-ing backfires and begets more pointless conflict.

Remember, when narcissists or borderlines pick a fight, the stated issue is typically not the issue. The real issue is their personality. Or, to be more accurate, their personality disorder. If you’re justifying, arguing, defending or explaining yourself in an effort to resolve an issue that isn’t actually the issue, how exactly will that help you resolve anything or prove your point?

Have you ever won an argument by actually arguing with the Crazy? Remember, arguing with someone you think is crazy makes you just as crazy as they are. The point of divorce was to disembark the Crazy Train, right?

Or, don’t respond at all if unnecessary upon reflection. Usually, the purpose of a nasty text or OurFamilyWizard message is to get a rise out of you, keep the conflict going and/or attention seek. Not to convey actually useful information. With a comprehensive and clear custody agreement, there’s little need for communication beyond childcare logistics and true child emergencies.

Riddle me this, if you’re such an asshole why does your ex insist on so much unnecessary communication? Do you seek the attention of individuals you consider to be assholes? If you’re anything like me, you seek to minimize, not maximize contact with annoying crazy-makers. Their absence makes the heart grow happier.

When you reflexively react to a narcissist or borderline’s provocations, you’re feeding the troll. Meaning, they feed off of the negative emotional reactions of others. So, don’t do it. Or, as I like to say, feed a fever; starve a psycho.™

When you consistently ignore their efforts to bait you into conflict, they’ll move on and seek supply elsewhere. (If you’re lucky.) Try to remember this when you’re sorely tempted to tell them to go penetrate their own orifice.

4. Identify your fears and vulnerabilities because Crazy sure as hell has.

Your fears and vulnerabilities are the levers by which a narcissist or borderline ex can continue to manipulate you. How many of your post-divorce decisions are still guided by fears of what the ex “might” do? If your answer is more than one it’s one too many. In other words, while you’re technically no longer under the same roof, the narcissist borderline is still living rent free in your head. And, it’s high time you evict Crazy McSquattypants!

Some clients allow themselves to be manipulated because they still want the ex’s approval. They’re futilely trying to get the ex to see them as a good guy or gal. Or, they’re trying to avoid the ex’s hostility, name-calling and smear campaigns. That’s not going to happen. Ever.

Think about it? Why would the narcissist or borderline relinquish the easiest device by which to manipulate and exploit you? They’ll keep withholding as long as you keep performing for their approval and avoiding their disapproval. And, yes, you’ll be “the asshole” after you stop seeking their approval.

And, that’s the whole point of this series. You’ll be seen as the asshole no matter what you do, so choose the path of self-respect!

Will Crazy temper tantrum and name-call harder? Of course. Will she or he threaten to take you to court for “refusing to co-parent?” You betcha.

Will Crazy vilify and smear you? Naturally. However, if you’ve culled Crazy’s flying monkeys and other enablers from your support circles and social media, who cares? I know it doesn’t feel good to have lies told about you. The desire to clear the smear is normal.

But, at the end of the day, it’s another form of toxic engagement. Don’t bother with the ex’s family and pre-relationship friends. They either know how twisted she or he is and don’t care, and/or are every bit as twisted as Crazy. Happy, healthy people don’t revel in the anger and misery of others. Cultivate indifference (i.e., no f*cks to give) and it will set you free.

Post-divorce, many of my clients psych themselves out of enforcing boundaries and making other healthy decisions. As I just explained, this usually occurs when you continue to fear what the narcissist or borderline “might” do. As a result, you continue to second guess yourself and play mental tiddlywinks with the ex.

If you’re still walking on eggshells after divorce, it’s time to make some changes — perceptual, attitudinal and emotional.

First, Crazy is already crazy. Nothing you do or say will make them not crazy. That’s their baseline. Second, most people divorce Crazy because they’re tired of walking on eggshells and the diminishing returns of all the energy expended into the relationship. Why bother divorcing at all if you’re going to keep walking on eggshells?

Third, Crazy is often able to maintain control via conditioned fear responses. Specifically, you don’t act in your best interest because you’re afraid of what Crazy might do if you tell her/him no. Or, stop answering the 96 text messages they send on an hourly basis.

Here’s an example of some reality test questions and reminders:

Look, narcissists and borderlines can and often do incredibly destructive things to themselves and others. I’m not advising you to underestimate the damage they could potentially do. Take all necessary precautions not to fall prey to false allegations (e.g., ABR – Always Be Recording). Help your kids develop their critical thinking skills, and how to have healthy boundaries. Teach them how to reality test as a way to fight parental alienation. However, continuing to allow Crazy to continue to control you post-divorce isn’t good for you or the kids.

Please check back in a few days for the third and final article in this series. It’ll include more techniques and strategies on how to be “the asshole” when co-parenting with a narcissist or borderline.