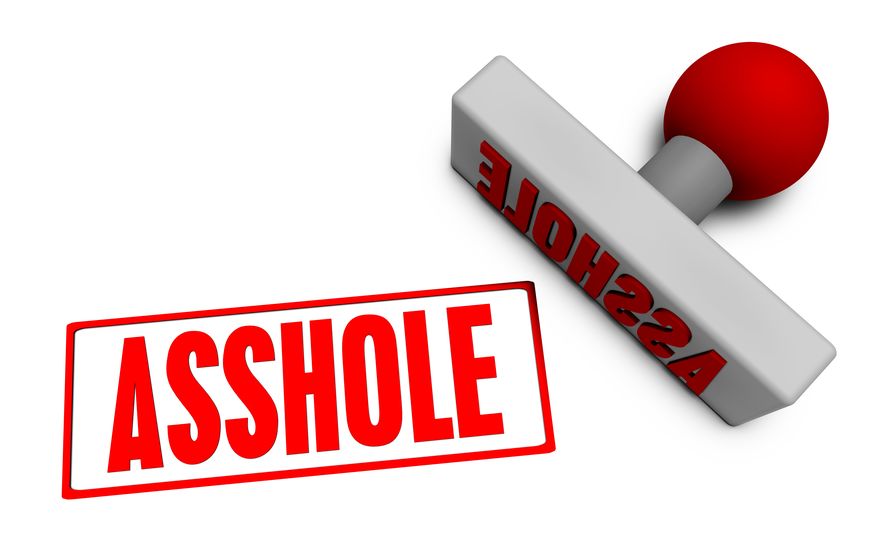 Do you share custody with a narcissist or borderline? If so, it’s time to face the harsh reality. Co-parenting with a narcissist means “being the asshole.” Therefore, you may as well get comfortable with it. Or, better yet, embrace it!

Before getting into the nuts and nuts, allow me to clarify a few things.

First, it’s impossible to cooperatively co-parent with narcissists, borderlines and other high-conflict people. They neither cooperate nor compromise. If you don’t want to be endlessly steamrolled, you’ll need to accept that co-parenting with a narcissist means “being the asshole.”

Second, parallel parenting is the most sensible way to manage custody with these individuals. Parallel parenting is a low contact model of shared parenting that typically involves a highly detailed, unambiguous custody order that implements boundaries and accountability. Narcissists and borderlines dislike and push back hard at both of these things. Once again, co-parenting with a narcissist means “being the asshole.”

Third, narcissists, borderlines and other personality disordered individuals see and experience the world quite differently from codependents and neurotic “normals.” Therefore, the operational definition of “being an asshole” differs greatly between the two groups. In which case, have you considered that “being the asshole” might actually be a good thing?

Fourth, relationships with narcissists and borderlines can cause one to see things through the narcissist’s distorted subjective reality. In other words, you become stuck in their backwards logic and quagmire of emotional reasoning and projections. In their alternate universe, everyday is Opposite Day. For example, you now believe you’re selfish for no longer tolerating the narcissist’s anger and cruelty. Or, that healthy boundaries are controlling and accountability is abuse. Like I said, Opposite Day.

Is it starting to sink in yet? Okay, repeat after me. Co-parenting with a narcissist means “being the asshole.”

Here’s how I define being an asshole. An asshole is someone who:

Of course, this list of traits isn’t exhaustive. Distilling it down to the basics, an asshole is a person of poor character who only considers their needs, feelings, wants, fear, hopes, dreams, suffering (usually self-inflicted) and rights. Not so coincidentally, many of the above characteristics describe behaviors and attitudes commonly associated with personality disorders and other “high-conflict” personalities.

Now, let’s travel to the Batshit Banana-pants Republic to identify how narcissists, borderlines and psychopaths define being an asshole. To narcissists et al, an asshole is someone who:

In many ways, comparing the two lists is like stepping through the looking glass. If, like me, you’ve a strong attachment to objective reality, this can be incredibly crazy-making. That is, until you understand what’s going on. Namely, their character pathology. In case it still isn’t clear, co-parenting with a narcissist means “being the asshole.”

What do narcissists, histrionics and borderlines think makes you, their ex and fellow co-parent, an asshole?

You expect reciprocity when you do the ex a favor, for example, trading days for the ex’s once in a lifetime very special, family occasion because “the-kids-will-be-scarred-for-life-if-you-don’t-trade-days-with-me!” du jour. You’re being an asshole! You tell the ex no in response to, well, anything it’s in your interest to say no to. You’re being an asshole!

You refuse to be the co-signatory on the ex’s new car (they can ill afford) after years of mistreatment, including a false abuse allegation and trying to get you arrested to destroy your custody rights. You’re being an asshole! You don’t want to pay thousands of dollars in addition to the court ordered child support for kid “necessities” (for which the court ordered child support is supposed to pay). You’re being an asshole!

You don’t want the ex badmouthing you, your family or new partner just like you refrain from doing to them because it hurts the kids. You’re being an asshole! You refuse to agree to homeschooling because you want the kids to experience peer socialization and healthy adult role models plus BPD mom already refuses to share information regarding academics and extracurricular activities. Not to mention the ex’s well-established lack of work ethic. You’re being an asshole!

You hold the ex to the custody order requiring them to pay their share of medical expenses within a 30-day billing cycle. You’re being an asshole! You refuse to participate in the ex’s pointless, endless text tantrums and attempts to bait you into the same old tired conflicts. You’re being an asshole! And you’re REFUSING to co-parent!!! I’m telling the judge on you!!!!!

Believe it or not, when a narcissistic or borderline ex calls you an asshole, it usually means they’re angry about no longer being able to deceive, bully, control, manipulate and exploit you. So, well done, buddy! Also, it’s often a sign that you’re making healthier choices, enforcing boundaries and are no longer being emotionally rattled by their ridiculous behavior and drama. Or, at the very least, not letting on that you’re being affected by it. Seriously, hat’s off to you.

Obviously, a rational human being should be able to cut through the aforementioned histrionics and determine who is the actual problem. Alas, it often takes teachers, physicians, therapists and family court deciders longer than one might hope to stop getting things backwards. How can you facilitate their awakening, or in trendy parlance, “woke-ness?”

Basically, it begins and ends with you.

So, how do you embrace being the asshole? Especially if you struggle with codependency and are easily bullied and manipulated by guilt, threats or sympathy ploys? Check back next week for part two of this article, How to Embrace Being an Asshole When Co-Parenting with a Narcissist or Borderline.