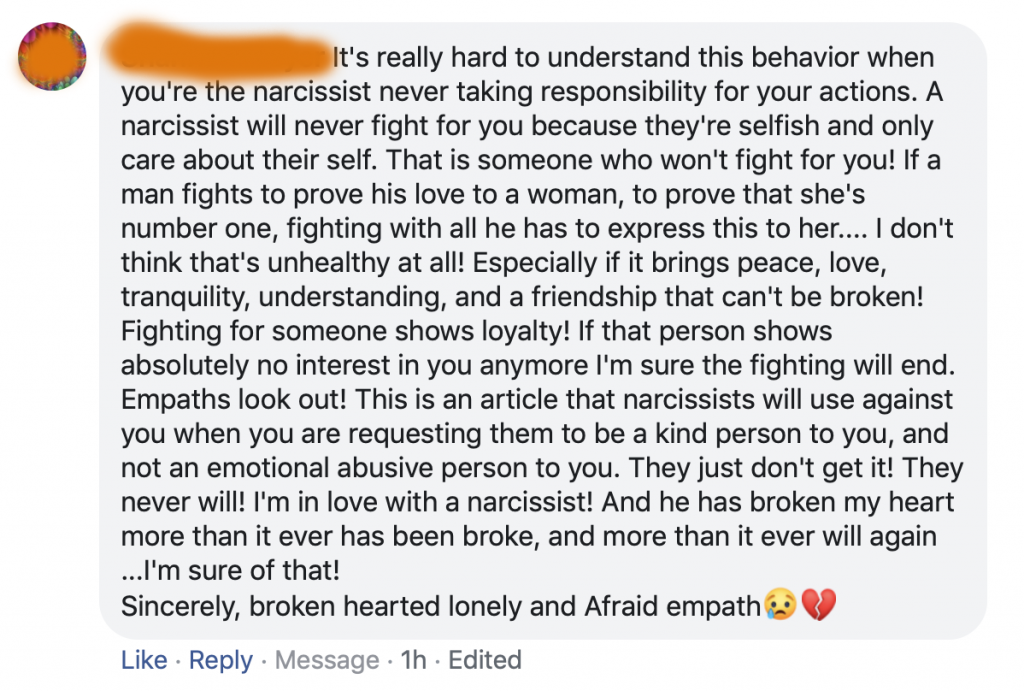 From an alternate universe not nearly far enough away — Planet Empath! Where if anyone does something you don’t like (or isn’t willing to tolerate your bullshit), you’re a narcissist. This morning, a woman posted a comment to a meme I posted last week, “That’s Not Normal: You need to fight for me and the relationship!” She states:

If a man fights to prove his love to a woman, to prove that she’s number one, fighting with all he has to express that to her…. I don’t think that’s unhealthy at all” (Oh yes it is, sweetheart.) “Especially if it brings peace, love, tranquility, understanding and a friendship that can’t be broken! Fighting for someone shows loyalty!”

First, fighting someone’s insecurities, pathology and immaturity in order to maintain a relationship isn’t a sign of loyalty. It’s called codependency. Healthy couples work together to build a strong relationship. They don’t tolerate abuse and nut jobbery to “prove their love.”

Second, nowhere does she say what she is willing to do to fight to prove her love to a man, show him that he’s number one, blah, blah, blah-bitty, blah.

Over the years, I’ve repeatedly explained in my articles and videos that borderlines, narcissists and other emotionally immature people use conflict to keep you engaged (in a toxic AF way) in the relationship. They interpret you no longer doing the crazy conflict dance with them as “abandonment,” loss of control and loss of interest. And, if we’re to believe this woman, an act of disloyalty.

If that person shows absolutely no interest in you anymore I’m sure the fighting will end.”

Yes, it will. Could it be her “narcissistic” ex-boyfriend had absolutely no interest in having more pointless conflict with her? Perhaps all the stupid conflict and “having to fight for you” nonsense wore him out? Maybe, just maybe, it became boring and old because relationships with these individuals rarely progress past the Power Struggle stage?

Just because a man or woman no longer wants to have circular, never-ending conflict over manufactured drama doesn’t make him or her a narcissist. *One of my pet hypotheses is that many people (not all, but many) who claim to be empaths are actually BPD. Just a hypothesis.

Personally, I don’t find arguing with 3-year olds — whether it’s an actual 3-year old or a 3-year old in the body of a 55-year old — especially interesting. Or, interesting at all, for that matter.