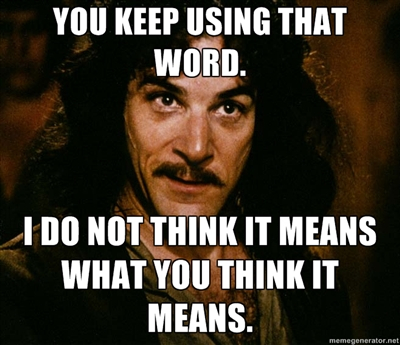 Have you ever felt like you and your narcissistic or borderline spouse are speaking two different languages? If so, it’s probably because you are. To quote Inigo Montoya (The Princess Bride, 1987): “You keep using that word. I do not think it means what you think it means.”

Part of my clinical work involves reviewing client emails and texts from their narcissistic and borderline wives, girlfriends, husbands, boyfriends and exes. There are certain words and phrases these individuals tend to consistently and emphatically use to manipulate, distort and create false narratives. It almost seems like these words and phrases hold magical powers for narcissists and borderlines. As if the mere act of uttering or typing them instantly and indisputably proves their point or wins their argument. At first glance, these words are innocuous and noninflammatory. When read in the context of an abusive relationship with a high-conflict personality disordered individual, they take on new meaning.

That being said, please allow me to rephrase Inigo Montoya’s meme-worthy words: They keep using that word. I do not think it means what you think it means.

And that’s a significant part of the problem. These seemingly anodyne buzz words and phrases as used by abusive personality types typically don’t mean what their audience thinks they mean. Their audience can include spouses, exes, children, family members, attorneys, custody evaluators, mediators and judges. See the potential problem? When communicating with or trying to mediate a dispute with a narcissist or borderline, it’s vitally important to understand what the words they’re using mean to them versus how they’re defined by Merriam-Webster.

In general, it’s best to avoid relationships and dealings with narcissists and other predators. But, if you must interact with them, always do your best to get it in writing and avoid any and all ambiguity. Leaving things open for interpretation by the narcissist or borderline is a mistake, especially if you’re in the devaluation or discard stage and/or in divorce or custody proceedings. In my experience, these individuals alternate between emotionally charged language or write as if they’re auditioning for LA Law.

There’s an odd bit of magical thinking I’ve seen many times, which is once the the narcissist or borderline puts something in writing, in their minds it becomes the de facto truth. In other words, Nancy the Narcissist or Bob the Borderline asserts a lie or distortion in email (with no supporting documentation), an then uses that email as proof of whatever they’re trying to prove. It’s both bizarre, amusing and, if the wrong people (like family court apparatus) believe them, frightening.

The following are some of the most common buzz words and phrases used by narcissists and other abusive personalities in their written and verbal communication. Again, when dealing with these individuals, don’t assume that words mean what you and most people with good reading comprehension understand them to mean. Ask that the narcissist or borderline explain what these words mean to them. If they become indignant or enraged by that request, it’s likely because you’re exposing their linguistic manipulations and games.

Reasonable: Each parent shall allow the other parent reasonable phone contact during their custody time.

I’ve seen written statements in which narcissistic or borderline mothers believe it’s reasonable to be able to contact the children whenever they wish, night or day, and expect that calls and texts be answered immediately regardless of what the father and kids are doing — e.g., having dinner, at the movies, in the middle of an activity. One woman even proposed to the court that her ex should lose 3 hours of custody each time he doesn’t immediately answer her incoming calls and reply to text messages. She also insists it’s reasonable to be informed  when the kids travel more than 45 minutes from the father’s home. That’s in-state, not out of state. That’s not just unreasonable, it’s nuts. Regularly scheduled access calls at predictable scheduled times are reasonable.

Immediately: You need to immediately reply to my texts if you expect me to trust you.

This speaks to their control and abandonment issues as well as their insistence for immediate gratification. Immediately is a big thing for these individuals. But daddy, I want an Oompa Loompa NOW!!!!!!!!

This is a smokescreen to justify the toxic or unreasonable demands of the narcissistic or borderline parent. It’s not in the best interests of the children to enable either parent’s control freakery or abuse of the other parent, or to intrude upon and disrupt their time with the other parent. When we allow that, we allow the children to suffer the effects of parental anxiety caused by control and abandonment issues. We also teach the kids that it’s okay to enable that crap. It isn’t okay.

Mommy or daddy need to learn how self-soothe rather than use their children in that capacity. It also sabotages the children’s ability to transition to their other home and time with the other parent. Basically, when this is tolerated, the kids are being denied at least one home in which they don’t have to walk on eggshells. Don’t get me started on the abuse of police wellness checks because the non-disordered parent doesn’t answer the narcissist’s or borderline’s harassment calls quickly enough.

What many narcissists and borderlines mean by communicate is that they tell you what they want or expect, and you comply. They whine, complain or rage at you, and you listen. Where ever, whenever and for however long they want. There’s no negotiation or compromise. There’s no dialogue. Your wants and needs (e.g., not wanting to communicate with them) are irrelevant. Effective communication means you’re following orders or are taking their abuse without complaint. While we’re at it, what does “on the same page” mean? Whose page would that be? If you guessed the narcissist’s or borderline’s page, well done.

Co-parent: If you don’t start communicating with me, I’m going to tell the judge you’re refusing to co-parent with me.

Most narcissists and borderlines are neither capable of nor interested in co-parenting. Not in the true sense of the word, which is why it’s helpful to have them explain to mediators and evaluators what co-parenting means to them. It’s usually highly controlling and punitive toward the other parent. This is especially true if the narcissist or borderline has control issues, and many of them do. Again, this has nothing to do with two-way communication or joint decision-making.

Narcissists and borderlines typically make this complaint when an ex is practicing Low Contact as part of a parallel parenting approach and exercising healthy boundaries. What the narcissist or borderline really means when they accuse an ex of “refusing to co-parent” is that their ex is refusing to be abused and controlled by them. With a comprehensive parallel parenting plan, there’s very little need to communicate unless there’s an actual medical emergency or unforeseen logistical complication that affects a kid exchange. You don’t co-parent with narcissists, borderlines and other high-conflict individuals, you parallel parent.

Trust: I won’t trust you until you prove your commitment by marrying me, moving in with me, giving me all your passwords, etc.

Oh really? First, no one, man, woman or however you identify, should consider marrying anyone that you don’t trust. If you’re a trustworthy person, it’s hurtful to be accused of being untrustworthy. Don’t abandon logic and buy a diamond to prove your trustworthiness or give full access to all your communication devices. Please understand, no matter what you do, how much you spend or how much you give up to prove your love and trustworthiness, it will never be enough. It’s wasted sacrifice. Without trust, it’s not a relationship worth having. If someone is using their alleged lack of trust to manipulate and control you, that’s wrong.

Second, personality disordered individuals project. Meaning they disown their unacceptable feelings, thoughts and actions and accuse other people of having or doing them. There’s no honor amongst skeeves. Narcissists judge others by their own crooked yardstick. If your partner is accusing you of being untrustworthy or cheating and you’re not, it may well be that he or she is up to no good.

Abusive: I won’t be abused by you anymore! You’re a narcissistic piece of shit and you’ll no longer control me or the children!

You’re not the audience for that kind of text or email. The judge is. By the way, most victims of abuse are looking to minimize or eliminate contact with their abusers, not engage in flame wars. If you’re not embroiled in a high-conflict divorce with a narcissist and they claim you’re abusing them, it usually means you’re a) not letting them have their way or b) you’re holding them accountable. Narcissists, borderlines and psychopaths experience accountability and consequences as being abused. You can try to explain this to them, or you can do something more productive like reorganizing your sock drawer. This is an argument you can’t win, so don’t engage in it.

Controlling: You’re controlling me! You can’t tell me what to do!

When a borderline or narcissist accuses you of trying to control them, it usually means you’re exercising healthy boundaries and they don’t like it. These individuals feel controlled by having limits like basic decency, the law and court orders placed upon them. This also has to due with a sense of entitlement, which many Cluster B disordered individuals possess in abundance.

Selfish: All you care about is your job, working out at the gym, your family, your kids! You don’t care about ME! You’re so selfish!

Ugh. Really, these adult toddlers are so darned tiresome. Someone who loves you wants you to take care of yourself. Mature adults understand that most people need to work for a living. Emotionally stable people aren’t threatened by familial and platonic relationships. Narcissists and borderlines are often grossly self-absorbed. They expect 150% percent of your attention 150% of the time. Anything you do that isn’t about or doesn’t involve them is perceived as a threat to their control and a potential abandonment trigger. Expecting you to have no life or interests outside of them is selfish. Believing they have a right to control others is selfish.

Did you notice the underlying theme of control in each one of these buzz words and phrases? When we distill the many outrageous, crazy and crazy-making behaviors of narcissists and borderlines, it comes down to control. Narcissists control to protect their false self to avoid feeling inferior and insecure. Borderlines control to avoid abandonment. Sometimes it’s about avoiding feeling inferior and being abandoned. There’s no deeper or more profound reason for any of this. If you can identify and understand the verbal manipulation, you can hopefully dismantle the emotional response you have to it. Emotional detachment is the pathway to freedom.