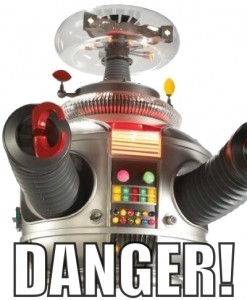 Many men who are going through a divorce with a high-conflict (HCP) and/or abusive personality disordered wife (e.g., Histrionic, Borderline, Narcissistic, Antisocial, Avoidant, Paranoid and Dependent Personality Disorders) think that giving her everything, appeasing her or making concession after concession will satisfy her and expedite the divorce process. This is usually a mistake.

Men who make this mistake are often tired of the conflict and the needless delays and roadblocks that HCPs and APDIs engage in during divorce. Typically, HCPs want the conflict to just go on and on and on, while their worn out exes just want to get on with life. This is when men are at the greatest risk of entering what divorce attorney, David T. Pisarra, of Men’s Family Law calls the Danger Zone.

That’s it. That’s all it takes for me to know that I have a client who is about to sign his life away. I’ve seen it hundreds of times. She works him over emotionally for months, in some cases, for years. By the time he’s in my office, he’s lost birthdays, holidays, countless weekends and midweek dinners with his kids. He’s answered hundreds of inane questions, and produced mountains of financial documents.

It’s at this point, when he’s reached the end of his emotional rope, where he makes spectacularly bad decisions. He will agree to a lifetime of non-modifiable spousal support and is as flexible to her as a pair of pantyhose.

. . . Guiding a man through the “Danger Zone” is difficult, painful, and frequently frustrating. And oftentimes no matter how much I warn a client what may be in his future, many feel that it won’t happen to them. Maybe it’s a ‘guy” thing. The reality is that we all want to throw up our hands sometimes and scream, “Enough!” But in the all too frequently rough and tumble world of divorce, where words slice like daggers and false statements are often viewed as fact, that surrender flag a man waves can actually be the start of another battle.

I advise many of my clients in exactly the same way.

Divorce doesn’t end after the papers are filed. Many of the choices men make or are pressured into making by their exes or disinterested divorce attorneys can adversely impact them and their children for years, decades and the rest of their lives. Therefore, agreeing to unreasonable demands in the present for the sake of expediency, can come back to bite you on the backside in the not so distant future. 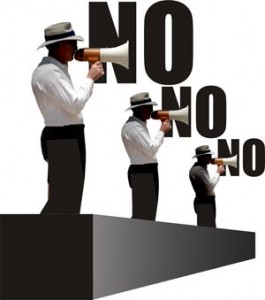 A man’s seeming inability to stand up to his abusive ex is learned behavior.

Men who have been in relationships with abusive women are conditioned to forsake their needs and rights and throw in the towel to keep the peace. The good news is that men can un-condition themselves. Helping men to firmly and finally say NO to their abusive wives, girlfriends and exes is a large part of  the work I do with my clients.

Helping men define their boundaries and say NO is a major developmental milestone and a significant step in a man’s recovery from a controlling, abusive wife. NO is a boundary and an effective boundary provides a consequence for violating it.

Your ex won’t like it and will probably become enraged, but that’s just too bad for her. Don’t let her adult version of the terrible two’s cow you into submission. Her rage and/or teary eyed tantrums are nothing more than cheap control device sand you don’t have to fall for it anymore — especially during divorce.

Let her pitch a tantrum. It will make her look like the out of control, unreasonable adult brat that she is. Don’t let her suck you into the vortex of Crazy when she does this. Remember, the calmer and cooler you remain, the more control you retain. If you allow her to suck you back into the Crazy, she gains the upper hand because Crazy gives her the home court advantage.

The Normal Rules of Behavior Do NOT Apply

Every man who is married to a crazy, abusive, controlling, high-conflict and/or personality-disordered wife needs to keep the following realities in mind:

2. You did not marry a woman who is capable of compromise or fair mindedness, so don’t base your decisions on wishful thinking. Her goal is to make you suffer.

3. Contrary to what your ex believes, it’s okay for you to say, NO to her. In fact, it’s not just okay for you to say NO, it’s imperative for your future quality of life. If you can’t say NO just yet; let your attorney do it for you.

4. Most importantly, any kindness or generosity you show to your ex will be perceived as weakness by her. Remember, you are not dealing with a normal person. She won’t be grateful or see you as a nice guy for letting her have her way. She will see you as a chump.

5. No matter how generous you are with her, she will still portray you as the villain and portray herself as the innocent victim/martyr, so do what’s best for you and your children in the long run. Trust me, having an impoverished, broken, unhappy father is not good for children.

The more you cede over to an entitled, abusive ex, the more emboldened she becomes to make even more outrageous demands, so don’t set this dangerous precedent. Most of the time, this kind of woman won’t stop until someone with authority makes her stop and/or unless you have the documentation to expose her bad behaviors. If you don’t think your attorney understands this or advises you to just acquiesce; consult with another attorney. If you’re going to acquiesce, it should be strategic and something you can afford to give away in order to get a bigger gain.

Once you agree to give your ex more than her fair share, she will see that as a green light to ask for more and continue to up the ante, so don’t do it. Figure out what your leverage is and then maximize it. Think of everything you consider agreeing to through the lens of long-term consequences and stay out of the Danger Zone.

P.S. Does anyone else hear the Kenny Loggins-Top Gun song every time you read “Danger Zone” or is it just me?