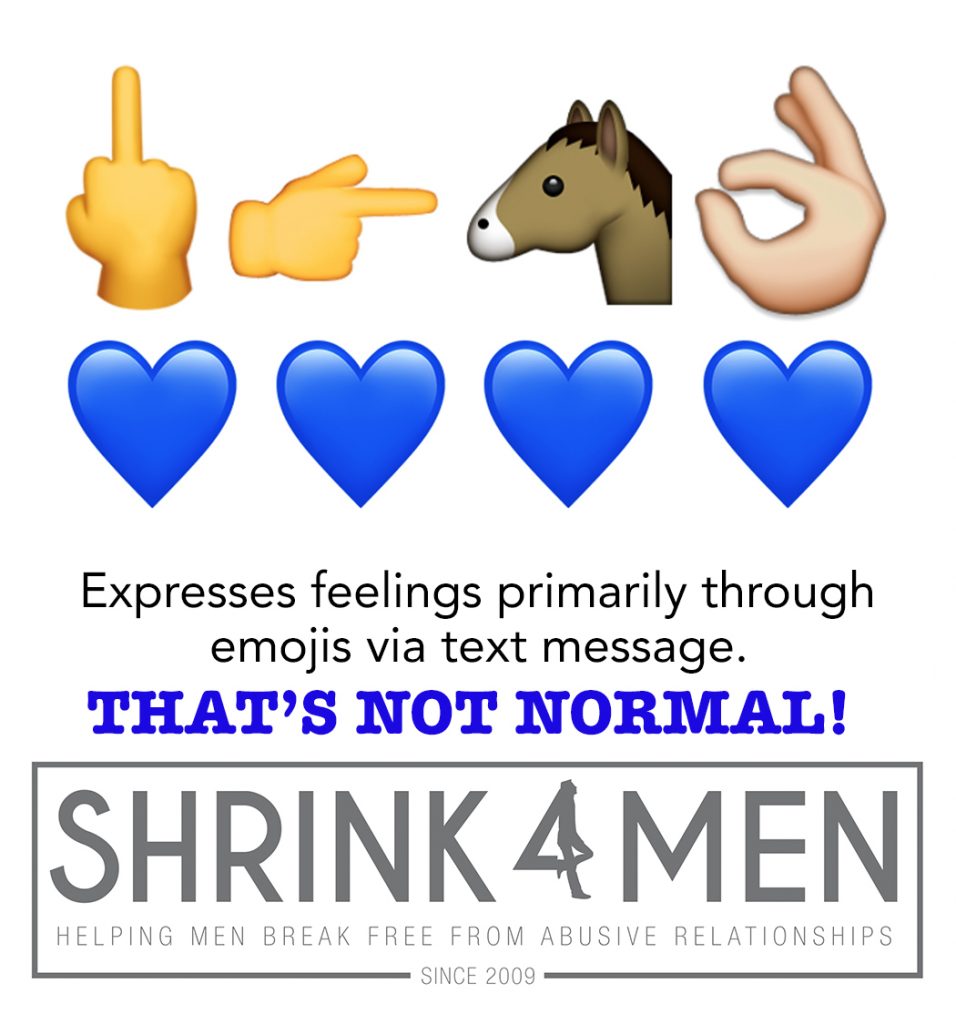 As part of my work with clients, I sometimes review text communications from abusive and likely personality disordered spouses, girlfriends, boyfriends and exes. It’s not exactly what one would describe as enjoyable reading material. Much of it is venomous, relentless, dictatorial and angry bloviating sentence fragments or walls of text dripping with entitlement. The texts are often written and sent in a staccato, rapid fire assault. In many cases, whether the recipient responds or not is irrelevant. They just keep text, text, text, texting.

Before describing the particular idiosyncrasies of how narcissists, borderlines, psychopaths, histrionics and other emotionally immature personality disordered individuals use and abuse text messages and emojis, allow me to address diagnosed borderlines who may stumble upon this article. Nowhere do I state in any of my writing that all borderlines, narcissists, etc., are exactly the same and do everything documented on this website.

Psychologists often generalize findings from research, case studies and their clinical work in order to educate. So, if you feel the need to email or comment to let me know that you’re borderline and you don’t do this, please don’t. I won’t respond and your attempts at shaming won’t work. This article generalizes patterns of behavior observed among a population of individuals who have one or a combination of Cluster B personality disorders and traits. If you don’t engage in these behaviors, that’s wonderful. This article doesn’t apply to you then, or your friend Molly in your DBT group who’s also borderline and doesn’t engage in any of these behaviors either. There’s no need to send that email or post that Facebook comment.

Now, back to the article.

Clients share these messages for different reasons. Some are looking for validation that they’re not crazy and that their partner’s behavior is, in fact, abusive. Some want to know if the texts or emails will help them in their divorce or custody cases. Some clients want help determining what messages to respond to and which to ignore as they begin Low Contact and BIFF communication (brief, informative, firm, business-like) due to shared children (no kids – No Contact). Some want help understanding what they’re doing wrong. Typically, what they’re doing wrong is engaging in pointless, circular arguments they can’t win or JADE-ing (justifying, arguing, defending, explaining) to someone who manufactures pointless, circular arguments they can’t win.

There are several distinct behaviors that stand out in their text messages:

1. Poor grammar and weird auto-corrections.  One presumes this is because they’re in such an agitated state, texting fast and furious, that correct spelling falls by the wayside. Or, perhaps they’re just too lazy to care or aren’t very good spellers. For this reason, a percentage of texts clients share are barely intelligible and often require explanation. “Go duck yourself” is an easy to understand auto-correction, however.

2. One-way, rapid fire machine gun style texting. On the Facebook discussion of the image used in this article, Felicia H. illustrates this beautifully and very amusingly:

The other thing I noticed
Is that tects
Come rapid fire one
The otger
So your phone is constantly pinging with new messages. Write a complete paragraph, then hit send dummy!”

I’ve heard this firsthand on more than one occasion. For example, during some client sessions, when the client forgets to silence their phone, I’ll hear the texts coming in fast and furious. Another example, a carpenter who once worked on my home had a phone that quacked. Yes, his phone quacked — frequently and in quick succession. Quack, quack, quack, quack, quack. He worked here for a few months and shared some stuff about his home life after finding out about my work. He’d chosen a quacking duck ringtone for his abusive, crazy horse rescue addicted girlfriend, which was actually pretty ballsy of him in a humorous passive-aggressive way. There were days when it sounded like a remake of Alfred Hitchcock’s The Birds was being filmed on the premises with an all mallard cast. More than once I saw the poor guy roll his eyes and mumble under his breath, “Go away” as he muted his phone.

3. Extreme name-calling. The cruelty and range of name-calling is really quite remarkable in crudeness, vulgarity and relentless repetition. Keep in mind the majority of the messages are sent by women to my male clients. The degree of taunting is beyond the pale. It’s obvious these individuals take great delight in being cruel. If these messages were written by children or teens they’d be the subject of anti-bullying campaigns.

4. “You better ” or “You better not” statements and ALL CAPS. These are basically demands, commands and threats. “You better not show up without the stuff I want from the store.” “You better have the kids fed and ready for bed by the time I get back from BINGO.” “You better not even ask  if we can take the kids to go see your ducking parents this weekend.” These messages are often random without conversation precedents. It’s like they have a brain fart and remember they haven’t TEXT YELLED at you or bossed you around for over 23 minutes. Many of these messages are written in ALL CAPS. Most people use all caps to emphasize a word or phrase (my preference is italics when available), NOT THE BULK OF THE MESSAGE!!!!!!!!!!!!! LOL!!!!!

5. Subjective pronouncements stated as facts rather than opinions. This frequently takes the form of the narcissist or borderline telling you that they know what you’re really feeling or thinking. Even if they actually bother to ask what you think or feel, they’ll still tell you what you think and feel. “I know you think I’m stupid. Don’t think you can lie to me!!!” “I know you’re ignoring my texts cause you’re cheating on me you ducking ass hole!!!!”

6. Demands are made in a Veruca Salt (original Willy Wonka) manner. “Make me pancakes.” “Pick up a pizza on the way home.” “Order me a whatever and pick it up.” “Go get me a Starbuck’s.” “Get the kids ready for bed.” “Bring me a cup of tea.” There aren’t any pleases or thank you’s. The issuance of demands isn’t mutual. It’s sad how servile many of my clients are in response to this kind of treatment. Sad, but understandable. It’s a result of codependency and long-term abuse.

7. The excessive use of emojis to express feelings. Sometimes these text messages resemble a bizarre new digital form of hieroglyphics. It’s like Queen Narca-titi and King Nut-ankhamun got iPhones. There’s nothing wrong with using emojis, but the extreme use is weird. It reminds one of a 5-year old run amok with feelings stickers. Mature adults use words to express their feelings, verbally and in writing. Immature adults use a string of 12 pixelated images of hearts, frowning faces, angry faces, happy faces, crying faces, poop, megaphones, pom-poms, etc., via text. The heavy use of emoji isn’t a sufficient red flag on its own. Lots of emojis + hourly selfies + daily drunkies (drunk selfies with their friends or adult children) + other potential red flags = ignore at your own peril.

8. Oddly paired statements and emojis. For example, winks, smiley faces, rolling on the floor laughing, hearts, thumb’s up and flowers immediately following demands, threats and name-calling. Just what the hell? Are they deliberately trolling when they do this? It’s probably just more evidence of their disordered minds.

9. Late night messages. It’s not an absolute, but generally speaking, anyone who regularly emails, texts and tweets in the wee hours of the morning when most people are asleep usually has issues. When I receive crazy emails from anonymous crazies, they typically arrive while I’m fast asleep and have email addresses referencing deities (e.g., godessa@me.com) or macabre email addresses (e.g., maybeallbpdsshouldjustkillthemselves@yahoo.com).

10. Text commands or text fighting while you’re both in the house, but in different rooms. For example, the narcissist is lying in bed playing CandyCrush or binge watching Say Yes to the Dress, and texts commands to you. “Go get tacos for dinner.” “Make me eggs in the nest.” “Have the kids do their homework NOW.” Or, argues with you by text while they’re in the den and you’re tinkering in the garage, taking care of the kids, doing chores, working in the home office or sitting across from them as they ignore you and simultaneously text nasty messages to you.

Texting is perfectly appropriate for certain kinds of communication. It’s not good for resolving conflict or conducting serious discussions. Many abusers use text messages as one-way transmissions to enumerate all the ways they think their partners suck or as a command device. Just wait until smart phones can deliver electric shocks like one of those horrible dog collars. In which case, your smart phone becomes a portable pocket sized version of your narcissistic or borderline abuser. Not only do you not have to respond to every message, most phones come with mute features and an off button. And, once the relationship is over for goodness sake BLOCK THEM!