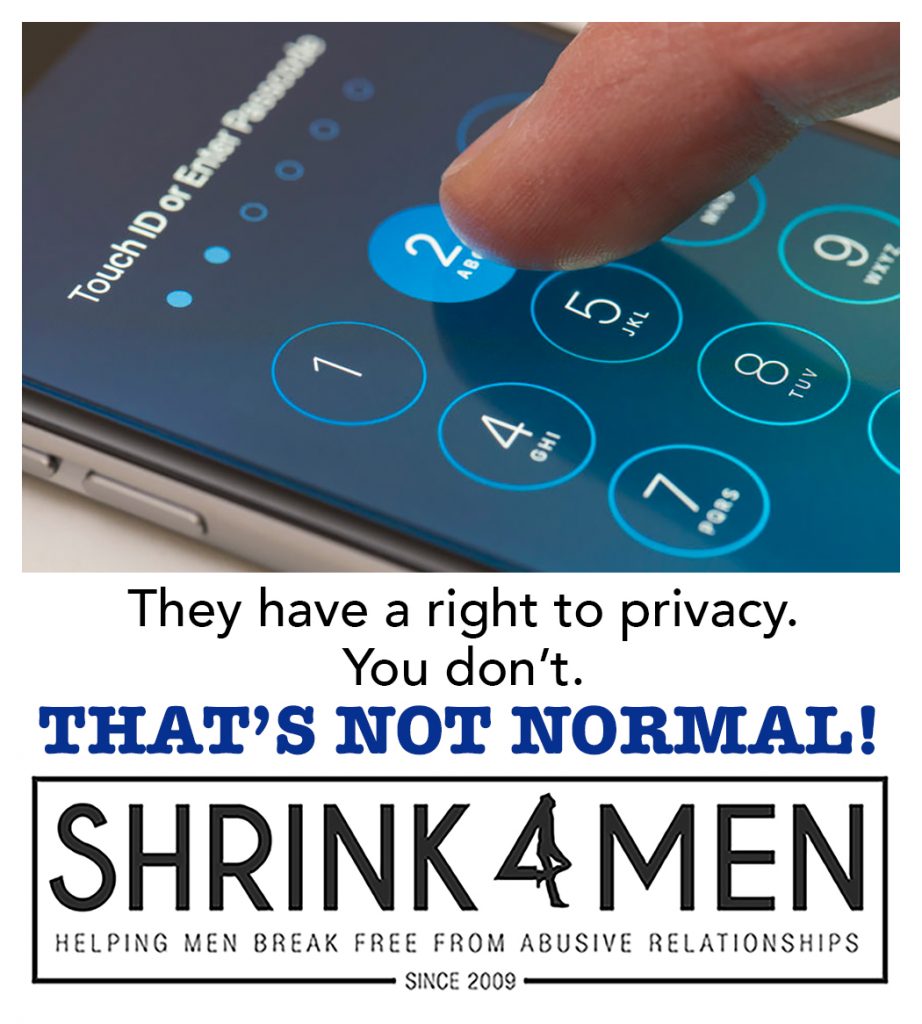 n an era of social media over-sharing, it can be easy to forget that we have a right to privacy. We also have a right to privacy in our intimate relationships — even if we “have nothing to hide.” I hear that quite a bit from clients and the occasional friend who have surrendered their phones and passwords to their partners. “I don’t have anything to hide.” That’s not the point, folks.

If your abusive narcissistic, borderline, histrionic, paranoiac, psychopath spouse, girlfriend or boyfriend has demanded your passcodes and logins, that’s not normal. It’s controlling and tyrannical. If you’re in an abusive relationship, you don’t have to be “hiding anything” for them to have a rage episode or make wild accusations about infidelity or anything else they can manufacture out of thin air.

Your sister could text you to invite you for coffee and the borderline or narcissist control freak-abandonment fear switch is activated:

Why does your sister want to have coffee with you?! Why wasn’t I invited?! Why can’t I be there?! What are you hiding from me? If there’s nothing to hide, why wasn’t I invited? Your sister is being disrespectful to me! She should’ve asked me if I could go at that time before she asked you! You love your sister more than me! Is there something going on with you two?!

Push back all you want. Before you jump down my throat because, “My husband/wife cheated on me and they have to PROVE to me that I can trust them again!!” please know, I’ve been there, too.

My ex cheated on me with a mullet-haired, buck-toothed, bisexual former child actress. (I giggle each time I use what’s become one of my literary devices – lemons –> lemonade.) The betrayal was awful and I understand the compulsion to have access to texts and email. Really, I do, but it isn’t healthy.

It comes down to how you want to live your life. This goes for relationships in which there’s been no infidelity as well. If you don’t trust your partner or your partner doesn’t trust you to the point phones and computers are expected to have an all-access pass, you don’t have much of a relationship. Especially if these demands are coupled with unfounded accusations of cheating or perceived abandonment. “I know you’re going to break up with me!!! You and your friends are discussing it!!! Oh no? Then let me see your phone!!!”

When I got together with the ex, I knew he’d cheated on his first wife multiple times. How did I know? He admitted it. It was the usual excuses narcs make for infidelity by blaming their partners for their behavior. It was an obvious red flag that I ignored them. He traveled a lot for business and I worried me he’d cheat on me, too. I tortured myself with those fears the first 4 weeks we lived together. The anxiety and suspicion felt awful.

I didn’t want to live like that, so made the decision to trust and could breathe again. The other choice I gave myself then was to end it if I couldn’t trust him. I chose to trust and stayed. In hindsight, it was obviously the wrong decision.

If you’ve surrendered your phone to your partner, please consider doing your friends, family and colleagues a courtesy and let them know your partner reads all incoming and outgoing messages. You may not care about your right to privacy, but some or all of your friends and family probably do. Also, they may want to bypass written communication with you altogether because, as previously, noted, there doesn’t have to be anything to hide. An abusive asshole can turn nothing into something with the misfire of a synapse.

For example, I’m friendly with a maintenance guy who does work at my house. Strictly platonic, nothing to see. He’s super nice and could easily be one of my clients — abusive marriage, alienated from his kids and a whole string of crazy ass girlfriends, including his most recent one.

We live in a very insular part of the world. If you’re single, it isn’t exactly what you’d call a target rich environment. Maintenance Man met the current live-in girlfriend during last call at a bar. She went home with him for a one-night stand and hasn’t left as of 6+ months later. For the sake of anonymity, let’s call her Squatty.

It took him about 6 weeks for him to sheepishly tell me what he’d done. She’s an unemployed, married deadbeat mother of two. Her estranged husband was able to have her removed from the marital home. He and the 2 kids are currently protected from her by a restraining order. The third day of Squatty’s squatting, Maintenance Man took her to get an abortion. Heaven only knows who the daddy was. This is just the crazy tip of the crazy iceberg. Squatty has a host of other issues, one more dysfunctional than the next.

After Maintenance Man finished his tale, I pointed to a tree bough high above my deck and said, “See that hornet’s nest up there. You may as well stick your penis in that instead because it’ll probably be quicker and less painful.” He laughed to which I added, “I’m not kidding.”

A few months later, he turned up for quarterly work items. We chatted and, no surprise, Squatty’s still squatting. He’s financially supporting her and she has the passcode to his phone. I told him he has a right to privacy and he looked surprised. My friend said she looks at his phone to see what he’s doing because “if [he’s] doing anything [she’s] going to do the same.” That’s so healthy! But, hey, he has nothing to hide. Which is why he was interrogated about whose house he was working at and who I am.

Maybe you’re wondering what’s wrong with her attitude. Her rationale is “I want to see if you’re cheating because if you are, then it’s okay for me to cheat.” If your partner cheats on you and that’s a problem for you, you end the relationship. You don’t cheat in retaliation. Unless you’re just as dysfunctional and immature.

None of this is healthy.

If your partner has access to your devices, but you’re not allowed to monitor their phones, be concerned. It’s practically guaranteed they’re doing things they don’t want you to know about — cheating, trash talking you or both. If you’re just beginning a relationship and they’re demanding this, get out while it’s still easy to do so. Even if you both have mutual access, it’s still not okay, unless you’re both narcissistic control freaks or terrified of abandonment borderlines.

This won’t get better with time. It’ll likely get much, much worse. There’s no reassuring those kinds of insecurities and abandonment fears. A control freak’s gonna control freak. Run.