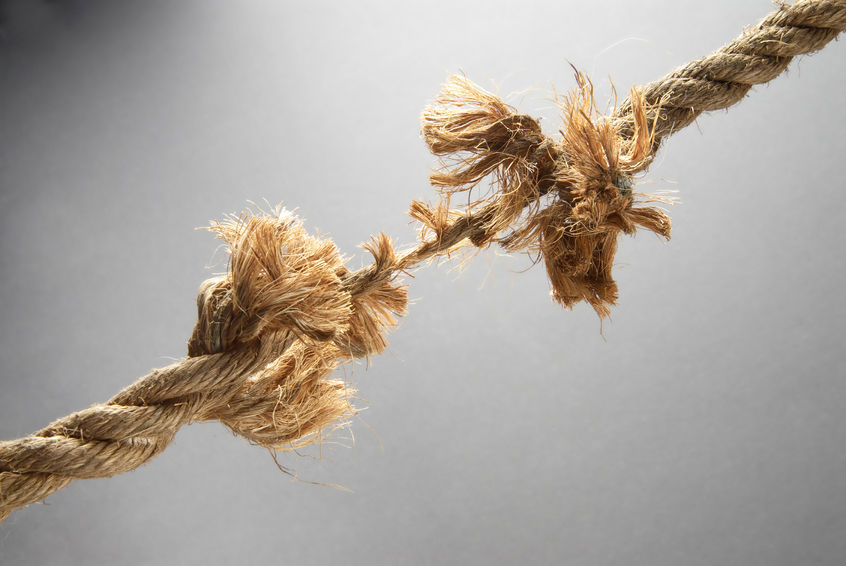 If you’re the victim of a narcissist, borderline, psychopath or other abusive personality, you probably understand how toxic and dysfunctional your relationships is, but still can’t transition into ending the relationship and walking away. It’s not unusual and there are many reasons for this.

While abuse isn’t a gender issue, as both sexes perpetrate at nearly equal rates, in my experience, male and female victims have similar tipping points, but different breaking points when it comes to ending the relationship. What’s the difference between a tipping point and the breaking point?

One tipping point is when you finally admit to yourself that, yes, your relationship really is that bad and that, yes, your spouse or partner really is that f–ked up. After which, you formulate rationalizations to stay and excuses for the narcissist’s deplorable behavior, perhaps blaming yourself, their ex-spouse or their family of origin.

Another tipping point is when you stop protecting and enabling your abuser and confide in a trusted friend, family member or therapist about what’s been going on in your relationship. Admitting it to yourself is a big step. Admitting it out loud to others is huge. It makes it more real in that it’s out there and the people who care about you will hold you accountable if you let them.

That’s one of the reasons abusers do their best to isolate you. It’s about controlling you and your reality, and getting you to buy into their distorted and dishonest reality. They don’t want any meddlesome third parties pointing out that the sky is blue, not chartreuse or whatever color it is in Narcitania.

What gets you to the tipping point?

Usually it’s lots of little things, the proverbial death by a thousand paper cuts. It often happens in moments of quiet self-reflection. The first tipping point in my relationship with my narcissistic ex occurred on a solo hike with my dogs the last summer we were together. I reflected upon a series of issues that were supposed to get better — like his rage episodes, his self-absorption, his selfishness and his never-ending multiple and mushrooming civil lawsuits with employers, business partners, neighbors, whoever — after some magical endpoint like after reaching financial security, after healing from the abuse he claims to have suffered from his ex-wife and after, after, after.

For the first time on that hike, I admitted to myself that the issues weren’t the issue. The issues were manifestations of the what the underlying issue is, was, always has been and always will be — his personality. Those things didn’t happen to him; he created them and they’d likely never end. I quickly pushed those realizations away, and started rationalizing. I liked where I lived (especially when he went on extended business trips). We both made big life changes to be together. I can handle it, blah, blah, blah. You know the drill.

The second and final tipping point was when I finally admitted to a few friends what was going on. Namely, that he’d been openly having an affair with a mullet haired, buck-toothed, bisexual former child actress (I swear I’m not making this up!) and that his behavior toward me was becoming increasingly cruel, or rather increasingly crueler. They told me in no uncertain terms that I had to get out and offered me a place to stay.

Still, I wavered. Then I told another friend and she lobbed an accountability bomb. She asked, “What would you tell a client to do?” At that point, I knew what I had to do, but hadn’t quite hit my breaking point yet.

A breaking point is the proverbial straw that breaks the dromedary’s back (that would be you, Mr. or Ms. Camel). Sometimes, it’s a big thing. For men, the breaking point is usually when their narcissistic or borderline wife or girlfriend cheats on them. I work with men who are routinely bit, slapped, kicked, punched, scratched and have their property destroyed by abusive wives and girlfriends, and they stay.

Even after there’s been police involvement, including false allegations, sometimes that’s  still not enough for these men to give themselves permission to leave. But if she cheats, well, that’s a different story. While many of the women I work with will tolerate adultery, including serial adultery, their breaking point is usually physical violence. I’m one of these women, too, so I don’t judge.

Sometimes the breaking point occurs over something that’s seemingly insignificant, but is one degradation, humiliation or exasperation too many. Like the umpteenth time she sits across from you at the dinner table ignoring you and Facebooking on her phone. Or he has the umpteenth tantrum when a neighbor disagrees with him at the annual summer block party.

My breaking point unfolded as a one-two-three punch over 2 week period. Punch one was a psychotic rage episode he indulged in while trying to erect that year’s Christmas tree. He sneered at me, delighting in how it would be the last Christmas tree he’d ever have as his affair partner is a “non-Christian.” I’m not at all religious, so not sure what the point was except to inflict pain. Why was he so pissed? Because he had to get off his ass, put down the Facebook and help me after eating the dinner I cooked and served him.

As he raged, his face going from red to purple, eyes bulging and shouting, “I CAN’T GET IT UP!!! WHY CAN’T I GET IT UP???!!!” I didn’t know whether to laugh or lock myself in the bedroom.

Punch two happened the next day. He was taking his mistress on a trip to Istanbul 3 days after we returned from Mexico, having lied to me about the Turkey trip for weeks. He tried to reassure me by saying that while he was no longer interested in having sex with me, not to worry, I was still “fuckable” and surely some other man would want me. And who says narcissists don’t have empathy! Pshaw!

Still, I had one foot in denial, one foot in bargaining and my head jammed up the backside of misdirected self-blame. As far as codependency goes, at that moment in my life I was a super trooper.

The third and literal punch happened the night after he returned from Turkey. I told him I’d finally confided in friends what was going on and he punched me. Well, to be accurate, he sucker punched me while my back was turned. I like to think if I’d seen it coming I’d have been able to bob and weave, but he didn’t afford me that courtesy.

I was in shock the next morning. I couldn’t believe he hit me, but then why not? I was hanging in there for each and every new treachery and humiliation. Why not that one?

Yet, there I was. And did he have remorse? Did he offer a heartfelt apology? No and no.

Eight hours after sucker punching me, he sat happily in his chair across from his brother and me, Cleveland Browns game on the TV, chomping on a bagel, posting photos on Facebook he’d taken in Turkey and yammering on about what a “magical” trip it was (I screenshot it). Of course, he didn’t mention he’d traveled with his mistress and had assaulted his girlfriend 8 hours before.

And that was it for me. Even at the height of all my codependent glory, I couldn’t rationalize or blame myself for that breathtakingly gratuitous bit of assholery.

At a recent Aimee Mann concert, she introduced the song, “You Never Loved Me,” by saying, “Have you ever known an asshole who’s such a sick asshole that you’re like hat’s off — that didn’t even hurt!” Why yes, Aimee, yes, I do. I didn’t just laugh, I snort laughed because that’s exactly how it felt.

I took him to the airport the next day. En route, I brought up his assault. He smirked and asked, “What did you expect?” Fair point. As I was pretty sure it was a rhetorical question, I didn’t bother to reply. What did I expect? He’d shown me who he was every step of the way and because of my codependency, I ignored it or made excuses for it.

After dropping him off at the American Airlines terminal, where we’d first laid eyes on each other 7-1/2 years before (I do like symmetry), I returned home and hired professional movers to come the following day and was gone by midnight. I understood that leaving on my terms would likely trigger a narcissistic rampage to end all narcissistic rampages. And it did.

He pounded out increasingly insane emails demanding I sign non-disclosure agreements to never tell anyone about him and his mistress, demanding I contact all friends and family I told about his betrayal and abuses that I’d lied and was under acute stress. He also wanted me to sign a document obligating me to pay both he and his mistress 2 year’s worth of their respective salaries if I spoke to anyone about them. I couldn’t make this stuff up if I tried. The craziest email was over 12,000 words long and read like it was written by a third world tin-pot dictator with an advanced case of neurosyphilis dementia.

Again, anticipating rampages and triangulation, I moved somewhere I’d never been before, where I knew no one and rented a house sight unseen save for Internet photos. Fortunately, I had the resources to do so. From the night I left, I went No Contact and haven’t looked back since. The only thing I regret is not leaving sooner. But that couldn’t happen until I’d reached my breaking point.

If you don’t leave once you hit the breaking point, then you risk becoming irrevocably broken. I work with people who have gone past this point. Each time I think they’ve reached their bottom, they break ground on new subterranean depths. It’s painful to bear witness to such needless self-inflicted suffering. At that point, all I can do is remind them they don’t have to live that way and have choices. They may not like their choices, but they have choices.

Why am I sharing this? To illustrate I understand how difficult it can be to leave. Really, I do. I’m a cliché — one narcissistic parent, one codependent parent who dated a string of narcissistic and borderline men. I’m also sharing it in the hopes of sparing you the worst humiliations and abuses yet to come if you haven’t left yet, that is to say, whatever your breaking point is.

As much as it may scare you to contemplate ending the relationship, you can and will heal. You can and will move past it. However, you can only heal once you’re out of the relationship. You can’t get better while swallowing poison everyday. With enough time and distance, you may find yourself laughing about the really absurd stuff you experienced while residing in Narcitania, and even find value in the pain you suffered in terms of making healthier choices, not repeating the past and helping others.