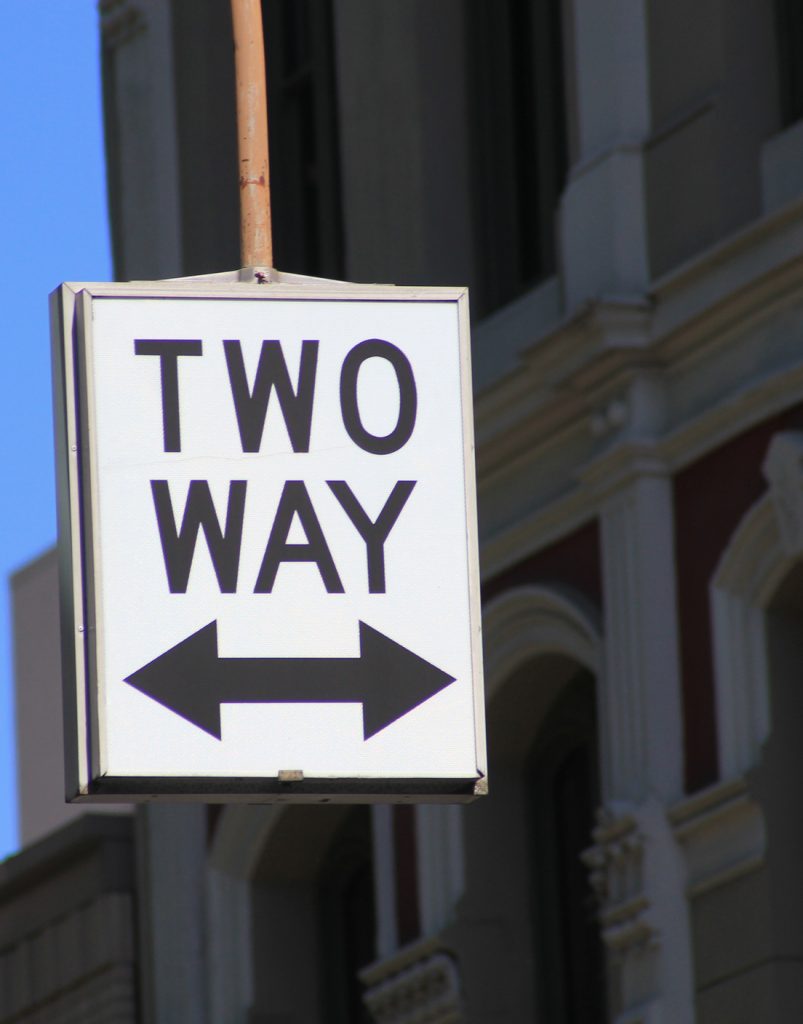 If you’ve been in a relationship (or series of relationships) with emotionally manipulative, self-absorbed, empathy-challenged, immature people, I have to ask, do you have healthy boundaries? Any boundaries? Do you know what a boundary is? Perhaps you have some boundaries, but they were too anemic to deter a determined emotional predator. Thus, your boundaries were bulldozed and demolished.

In the field of psychology, adults who lack empathy, don’t care how their behavior impacts others, blame shift, exploit and abuse intimate partners and family members are often ascribed some kind of personality disorder. The usual suspects include narcissists, borderlines, histrionics and psychopaths. If you dated or married someone like this, you, understandably, don’t want to repeat the experience. Unless you’re an enthusiastic masochist, that is.

As a result, you’re probably extremely sensitive to any sign a potential partner has personality disorder traits, or red flags. No rational adult wants to keep getting burned on that hot stove. So, you doggedly consume as much red flag-narcissist-borderline-psychopath articles, books and YouTube videos  as possible. While you’re in research mode, do yourself a favor and explore what makes you vulnerable to these individuals and how to heal and/or shore up those vulnerabilities.

The most common vulnerabilities include having a parent(s) with similar issues, codependency, conscientiousness (or what I call the 3 N’s — nice, naive and non-confrontational), trauma bonding, poor self-care and a lack of boundaries. Boundaries! There’s no way around it. You gotta have ’em. Boundaries are ultimately your best defense against attracting yet another emotionally manipulative and exploitative mate.

What does having boundaries mean?

An effective boundary is an invisible fence with a gate that you erect around yourself. It keeps the bad stuff out, and lets the good stuff in. It’s a wall of protection around your personal security, self-respect and your identity as a person. Good boundaries decide who you let in your life, how often, how far and what you will and won’t tolerate regarding how others treat you. Healthy boundaries are characterized by personal autonomy, self-respect, personal safety, emotional security, well-being and respecting the boundaries of others.

Boundaries determine when to say yes or when to say no to what’s being asked of you. When consistently maintained, they help you say yes or no with authority and conviction. Boundaries are what stop other people from taking advantage of you. Most importantly, good boundaries ensure that you attract people who won’t try to take advantage of and harm you in the first place. In other words, people who also have healthy boundaries.

The difference between benign and malicious boundary violations.

Not all people who bump against a boundary are toxic and/or personality disordered. A good two-part litmus test is:

You shouldn’t have to state a boundary more than twice to a rational adult. I go by Ian Fleming’s rule of three, “Once is happenstance. Twice is coincidence. Three times is enemy action.”

Some people who have difficulty remembering boundaries are clueless, but benign. For example, “No, Cousin George. I’m not loaning you money anymore. Go ask Auntie Gladys.” (By the way, Caller ID can help you avoid those calls from Cousin George altogether. I don’t know for certain, but my theory is that Caller ID was invented by a computer guy who either had a borderline ex or a narcissistic mother.)

Then there are people who deliberately and maliciously ignore boundaries. Not out of clueless-ness, but out of entitlement, a lack of empathy, maturity and integrity. They don’t care what your boundaries are if trampling them gets them what they want. For instance, narcissists, borderlines, psychopaths and other abusive manipulators have a keen instinctual awareness of interpersonal boundaries, much more so than the average non-disordered person.

Boundaries are a threat to their ability to control and exploit others. Therefore, they’re usually quite adept at figuring out who will let them get away with the worst of their behavior with the least amount of push back. “Nice guys” and “nice gals” are typically their targets of choice. Psst! I’m talking to you, codependents!

Many of my clients mistakenly think, “If I start implementing boundaries with my narcissistic or borderline wife, things will get better and we’ll go back to La La Love Bombing Land!” No. No, you won’t. When you try to implement boundaries with an abuser after years of having none, they don’t magically straighten up and fly right. Their bad behavior usually escalates. In fact, they will attack you harder than they ever have before.

The message is clear: “Don’t you ever think of trying that again, Mister/Missy!” When tantrum throwing toddlers do this, it’s called an extinction burst. It’s a burst of defiance and rage when a child is denied familiar rewards. I’m perfectly okay using that term for tantrum throwing adult toddlers, too.

This can be especially thorny for male victims of narcissistic, histrionic and borderline women. Instituting boundaries often leads to accusations that you’re abusing the adult toddler. Then, the police are called in retaliation to show you who’s boss. The disordered of both genders experience accountability as abuse and boundaries as “being controlled.”

Boundaries protect you from getting involved with jerks.

If you’d had healthy boundaries when you met the crazy spouse or ex, the relationship probably would’ve come to an abrupt end soon after they did their initial boundary testing. In other words, when they let the mask slip and you caught the first glimpse of their cruelty, selfishness, dishonesty and irrationality. Did you ignore it, make excuses for it and/or apologize to them when they blamed you for their bad behavior? If so, then it’s full steam ahead to Crazytown.

A person with healthy boundaries calls them out and, in no uncertain terms, tell them their behavior is unacceptable. And, furthermore, if they do it again, they’ll be shown the door. If you do this, that’s when Ms. or Mr. Crazypants typically runs screaming into the night. Accusing you of needing to grow up, being an abuser or that you don’t know what it means to be in a relationship.

The correct response to that isn’t chasing after them to apologize. It’s adopting the attitude, “Whatever. Bye-bye, loco nut!”

This is why it’s so critical to create healthy boundaries and enforce them with a resolute commitment to yourself. Bottom line: Anyone who tells you that boundaries are mean, selfish, controlling or abusive is full of beans. Hopefully, you have a better understanding of what boundaries are and why they’re so important. Now let’s discuss one of the most basic interpersonal relationship boundaries — the golden rule.

“Do unto others as you would have them do unto you.” Otherwise known as the golden rule or law of reciprocity. It refers to what is, ideally, the natural and mutual give and take in adult relationships. Abusive personalities don’t abide by the Golden Rule. They follow the do as I say, not as I do rule.

Reciprocity is an unspoken social norm based on fairness. It seems to be a hardwired response in most people rather than a conscious obligation or manipulation. Generally, people respond to kindness with kindness; generosity with generosity; and support with support. Reciprocity helps to facilitate balance in relationships. Even young children have an awareness when something isn’t fair, and no trouble saying so. Not fair!

If a relationship is non-reciprocal, it eventually breeds resentment in the person doing more than their fair share. It fosters a sense of entitlement and ingratitude in the person who is occupying the McMansion on the one-way street paved with double standards. In all likelihood, the entitlement and lack of gratitude were pre-existing conditions.

Take an accounting of your relationships. Ask yourself:

I would argue that if a partner/potential partner doesn’t naturally respond to loving gestures in kind, or at least express appreciation, it probably doesn’t bode well for the relationship. Part of what drives reciprocity is a sense of indebtedness and obligation. In normal human beings, this doesn’t manifest as, “Oh crap. Joe did something nice for me. I better do something even nicer so he doesn’t think I owe him anything.”

That belief system is indicative of someone who has transactional relationships. In other words, someone who gives only to get something in return, and usually of greater value. Their giving doesn’t come from a place of warmth, affection or appreciation. They deliberately want to foster a sense of indebtedness. This is often true of codependents, too. Do you do “nice things” for others to get them to like you and/or foster a dependency on you? This isn’t healthy relationship behavior either. It’s manipulative.

There are people who expect others to do kind things for them, support and help them and feel no obligation or gratitude. Otherwise known as the pathologically entitled. People who are pathologically entitled don’t reciprocate. Due to their misplaced sense of special-ness or professional victimhood, they feel owed and deserving of, well, anything and everything they want. And, because they’re so special, others are expected to do for them without expectation of receiving anything in return.

When confronted on their entitled attitude, they often respond by saying, “That’s what a husband/wife is supposed to do!” You only did that so other people will think you’re a good boyfriend! I didn’t ask you to do that for me!” Or, they deny that you helped them at all. Basically, they treat you like a servant, minimize, devalue or gaslight.

This means you’ll need to adjust your typical approach to forming relationships as well. Including becoming comfortable with healthier partners who are actually wired to reciprocate. What a novel concept!