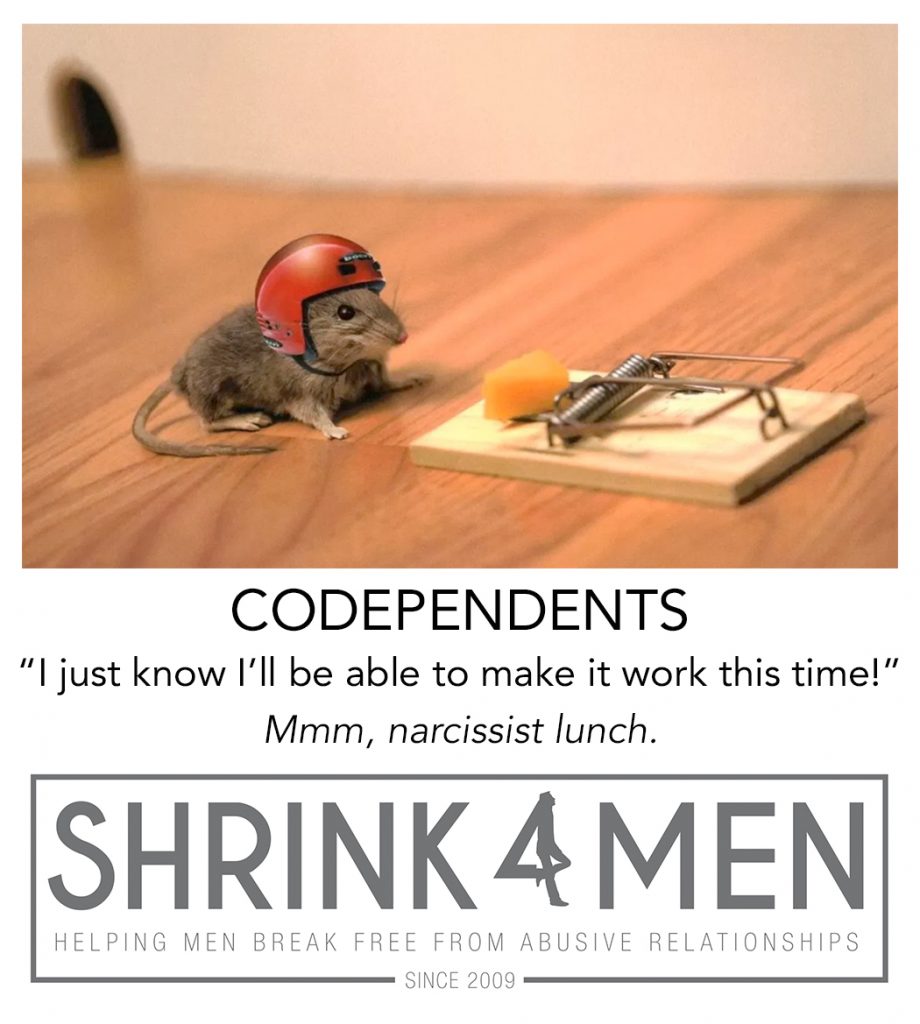 Codependents are people who enable and care take others (in ways that are often harmful to themselves) in the hopes of receiving love for their efforts, sacrifices and willingness to tolerate abuse. These counterproductive beliefs and behaviors are usually learned in the codependent’s dysfunctional family of origin. If you identify as codependent, perhaps one or both of your parents are personality disordered (narcissists, borderlines, histrionics and psychopaths), mentally ill (schizophrenic, bipolar, chronically depressed), codependents and/or alcoholics or addicts. If so, you may have grown up believing abuse and other dysfunctional behaviors like enabling, lying, avoidance, making excuses for others, etc., are acceptable or normal.

These behaviors and beliefs are neither normal nor acceptable. They’re defense mechanisms you developed in childhood that helped you to cope, to avoid or minimize abuse and helped you to get some of your needs met — albeit in unhealthy and indirect ways. If you want healthier relationships as an adult, you’ll need to identify these old beliefs and defense mechanisms that no longer serve you. They no longer serve you because they contribute to keeping you stuck in a pattern of unhealthy and abusive relationships.

In order to be in a relationship with a partner who’s similar to a narcissistic, borderline or alcoholic parent(s) or other family member, you need to continue to believe that their toxic and abusive behaviors are normal, justifiable or that you’re responsible for them in some way. In other words, you need to keep avoiding, rationalizing and tolerating abuse. As a child, you couldn’t choose your parents. Children don’t have the power or resources to say, “Screw this noise! I’m getting outta this loony bin!” Kids are utterly dependent on their parents, even if they’re unstable and abusive. So kids adapt to, compensate for and accommodate their parents’ pathology. As an adult, you have resources and agency you didn’t have as a child. You don’t have to do this anymore. You can choose health. You can choose healthier partners. You don’t have to adapt to, compensate for or accommodate another adult’s crazy anymore.

You can choose to confront these issues, which, as an adult are your issues, let go of the old unhealthy beliefs and behaviors and level up. If your partner wants to become healthier, they’ll level up with you. If they choose to maintain the toxic status quo, you don’t have to keep misery company. Nor do you have to feel guilty about no longer wanting to keep misery company.

The following are some of the most common relationship misconceptions and lies learned in childhood by codependent, people pleasing, caretakers and rescuers:

1. If I figure it out I can fix it. No, you can’t. At least not in the way you want to believe you can fix it. Once you figure out what it really means to be personality disordered or codependent, the solution is to end the abusive relationship and get support for your own issues, so that you can make healthier choices and have healthier relationships. The only person you can fix or change is you. One of the most difficult and important things for a codependent to learn is how to stay in your own lane. Meaning, another person’s problems are not yours to fix. If they can’t or won’t acknowledge their issues and that their behavior toward you is intolerable, you either accept it or end it. Those are your choices.

2. If I try harder it’ll get better. No, it won’t. Again, you can’t do the work for someone else. Human change just doesn’t work that way. If you want to lose 20 pounds you have to make dietary changes and exercise. You can’t pay someone to eat kale and run on the treadmill for you. The same principle applies to personality change. Improving yourself is a good thing. Doing so hoping it will lead to a positive change in a narcissist or borderline is unrealistic. In fact, the healthier you become the more unbearable a relationship with an abusive disordered individual will become.

3. If I’m more loving, patient, understanding and have more faith, the narcissist or borderline will stop abusing me. No, they won’t. You can’t love someone well or pray the Cray-Cray away for the same reasons as numbers 1 and 2. A patient doormat is every bit as much a doormat as a resentful doormat. The solution is to stop being a doormat, respect yourself and partner with someone who respects themselves and respects you.

4. I’m protecting my kids by staying. Not really. You’re actually participating in the intergenerational transmission of abuse. In other words, you’re teaching your kids that abuse is acceptable, deserved and normal.

5. Putting my needs first and ending the relationship would be selfish. There’s healthy selfish and pathological selfishness. Healthy selfish means you’re respecting and taking care of yourself. Selflessness isn’t healthy. Being a doormat dishonors your responsibility and obligation to yourself. Only a pathologically selfish person, like a narcissist or borderline, expects you to hurt yourself or neglect your well-being in order to demonstrate your love. That isn’t love.

7. She or he won’t be able to survive without me. Yes, they will. It’ll probably make your head spin how quickly they replace you with another enabler. Their entire personality structure has been constructed to preserve the false self. The parasite will find another intestine. Even if they don’t, they are not your responsibility. We all have choices, including the personality disordered. Choices have consequences, including choices made by the personality disordered. Although, many narcissists and borderlines surround themselves with dutiful enablers and thereby avoid natural consequences. Choosing to stop enabling the crazy usually heralds the end of the relationship, but that’s a good thing!

8. I can manage it. No, you can’t. You can live with it, tolerate it, “radically accept it,” resign yourself to it or enable it. There’s no managing a narcissist, borderline, psychopath or other form of Crazy. Some therapists will lead you to believe that you can learn how to not trigger your narcissist or borderline. That’s utter nonsense. You’re not responsible for your abuser’s behavior. That puts the onus of responsibility on the wrong person. If you don’t like being abused, then you take responsibility to remove yourself from the relationship or situation. You don’t manage abuse. You walk away from it.

9. She or he will mellow or stabilize with age. Do you really want to spend the next 10, 20, 30 or 40 years of your life to see if this comes to pass? They rarely get better with age. They typically worsen with age. Or, they stay every bit as miserable, but change their abuse and manipulation tactics as a result of diminishing physical attractiveness and strength. For example, instead of seducing you with sex, they play the pity card.

10. Things will get better after we marry or have a baby. NOOOOOOOOOOOOOOOOOOOOOOOOOOOOOOOOOOOOO!!!!!!!!!!!! These issues do not get better after legally binding yourself to an abuser through marriage or creating a child that they’ll likely use as a weapon to hurt and control you. Think of it this way. An employee wants to be made vice-president. Her or his work performance is characterized by coming in late, not showing up, losing clients, insolence, alienating colleagues, laziness and disrespect to supervisors. They claim their attitude and work performance will miraculously improve if you make them vice-president, give them a big fat raise and more responsibilities and duties. Does this rationale make sense? If you were the hypothetical business owner would you be willing to take such a risky gamble? You date or marry as person as they are, not for the person you hope they will change into at some magical point in the future.

The reality is that you can’t save or rescue someone from themselves. You can’t love someone into being a better person no more than you can love a rattlesnake into being a Golden Retriever. You couldn’t do so with your dysfunctional abusive parent(s) and you can’t do so with an adult partner who’s every bit as screwed up as your mom or dad.

You’re not a super hero or heroine. For that matter most narcissists, borderlines and psychopaths aren’t arch-villains with super powers that make it impossible to end the relationship. They’re just emotionally immature jerks whose childhood wounds dovetail with your own. It’s both hubris and naive to believe you have the power to change a personality disordered person. Choosing to stay in abusive relationship is volunteering to be a martyr, and for what? Confusing your family of origin dysfunction for love? Heal your wounds and you won’t match up with these predators anymore.