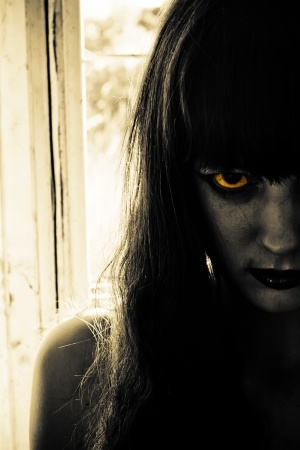 It is day 5 of Domestic Violence Awareness Month. Today’s In His Own Words is an example of what can happen when you ignore warning signs, red flags and, most importantly, the Crazy.

“Disconnected” thought he was was reuniting with his middle school crush. He did not get the moonlight, roses and happily ever after he hoped for, but rather stalking, harassment, suicide threats, 911 calls and a restraining order.

Q and I met in middle school, back in the 80s. Zoning districts sent us to separate high schools, but we stayed in constant contact. In college we talked about dating, but various commitments conspired to keep us as friends. We lost touch in the early 90s, but in my mind Q was still a very dear friend.

Years later, I was facing the end of a 10 year marriage to a wonderful woman. As this story is not about her, I will only say we had a very amicable divorce and remain close friends (and yes, she has said “I told you so.”) Over the years, I had moved across the country, but would research Q, hoping to reestablish contact.

One night, while poking around on line, I found a profile belonging to Q. I was so excited at the possibility of catching up; and catch up we did. We shared stories about the intervening years; we talked about our current relationships. We were both at the end of long-term situations. Having someone with whom to talk was a great comfort.

As we were catching up, she told me of a tragedy that had happened to her and her child. In the interest of anonymity, I will only say this event made national news, though the names were changed to protect the innocent. When she talked about the situation, she made a point to tell me that she had never really let it upset her. Any emotionally healthy human being would have been devastated. I felt so terrible knowing anyone had to suffer that way. I rationalized it as she was simply dealing with denial, even 10+ years later.

Q was “engaged” to an abusive man (they had been engaged for about a decade, if you can call that an “engagement.”) Late one night, Q called me during a heated domestic dispute. She had been drinking and had allowed her teenaged child to be pulled into the middle of a drunken fight. At the time, I told myself she was a victim and drinking was a way of coping. I found myself thinking, “She is a victim, and I need to be there for her.”

I separated from my wife and moved closer to home. Q and I continued talking, still as friends. Late one night, while I was working, she sent an instant message, asking why I was still up. As I was busy, I did not immediately respond. She repeated the message. Then she started sending more and more desperate messages:

“What are you doing”

“Who are you with”

“Why won’t you answer me”

all within the space of a few minutes. Then my phone started ringing. She called several times in rapid succession. Putting my professional responsibilities aside, I answered, assuming there must be some emergency. She started by accusing me of being involved with someone else. She accused me of lying and trying to hurt her.

We had yet to see each other since being back in touch and no talk of “a relationship” had occurred. She admitted that she had been drinking, and I told myself it was an isolated incident. This event repeated several times before we met again “face-to-face,” (and several times after.) Somehow, I convinced myself that she was upset; that given her situation, “Who wouldn’t be?”

After filing for divorce, Q started talking about a future relationship. She was still “engaged,” but swore she would end it before we got involved. As time passed, I let her push further and further into my life. When I asked her about her “engagement,” she told me I was using her as a “safety net.” She accused me of lying to her about my life. She accused me of lying to her about everything. She even suggested that my divorce was a lie.

At this point I tried to break it off. Her response? She told me that she had ended things with the abusive ex and had returned the ring. A few days later I ran into her in public, the engagement ring was still on her finger. When I asked her about it, she became irate with me, accusing me of lying and using her.

[Obviously, by now I was aware that many of the examples above were clearly “red flags.” Yet, I told myself “my friend needs me.” “She needs someone to show her…” well, you get the idea. It was the search to understand why I allow myself to think that way that brought me to Shrink4Men.]

Despite recognizing the issues, once she moved out I decided to start seeing her. Immediately she saw everyone in my life as a threat. She accused me of sleeping with my friends, her friends, strangers. If tried to talk to her about it, she accused me of twisting the facts to “blame her.” If I told her that it upset me, she said I was acting like a child.

Late one night, she showed up at my house drunk accusing me of sleeping with her friend. She pushed her way inside. I politely asked her to leave. She accused me of all types of crazy things. I stopped being polite and told her to leave.

When she refused, I tried to call 911, as I know better than to try and forcibly remove someone like that. My phone died as I was dialing. She was very animated and screaming by this time. She screams, “That’s right, call the cops, you pu$$y, you’re not even man enough throw me out of your house!”

Around this time, I discovered that she was again living with the “former fiancé.” When I approached her about it, again she blamed me. She accused me of trying to twist the facts to make it sound like her fault. I tried to cut off communication.

The final straw was when she entered my home (using a keypad) against my direct objection; I was not at home at the time. She refused to leave until I spoke to her “face-to-face.” I called the police and met them at my house. They removed her without the “face-to-face” conversation; I chose not to press charges. Later, I discovered that during her time in my house she went through everything I own, personal correspondence, bills, journals, etc. She stole several items that belonged to me, to my family, and to my former wife.

Over the next two days I received literally hundreds of phone calls, texts and email messages. I blocked as many phone numbers as my provider allowed, I blocked her email addresses, and she found new ones. Again I called the police, and again I tried to be the “nice guy” and did not press charges. I received one final message, a suicide threat.

At the police officer’s suggestion, I filed for a “Domestic Injunction” (i.e. restraining order), as that seemed the most appropriate course of action. In court, she told the judge the sad story of being a single mother targeted by an abusive man who promised her and her child the world, only to yank it out from under them. She explained that she was worried about me after I stopped talking to her, and that the “visit,” calls and emails were only to ensure my safety.

I had everything well documented, including the police reports, texts, emails and call logs. Had the judge bothered to even scan the available information, it contradicted everything Q told the court. The judge did not allow me to speak. He said my petition was all I was allowed to present. I was not allowed to question her or even ask the judge to please read her emails or texts. The judge treated me like a monster and her like the victim.

In the end, the judge said to me, “You are a despicable human being and as much as it pains me to do this, as Q has not denied the stalking behavior that you have alleged, I am forced to grant this petition. However, I will only allow the minimal time possible, which is 6 months.” Then to Q, he said, “I do not know why an attractive woman like yourself would even be seen with such a horrible person. Surely you are smart enough to stay way from people like him in the future.”

As I looked at the judge with complete and utter dismay, I said, “Thank you, your honor.” He said everything she needed to hear to validate her behavior. In her mind, it was everyone but her.

I have not heard from Q since that day in court.  Looking back, this is what I would like to tell myself:

Ironically, Q was the first one to tell me about BPD. Her mother had been diagnosed with the condition. I guess it is true what they say “The sh!t don’t fall far from the bat.”