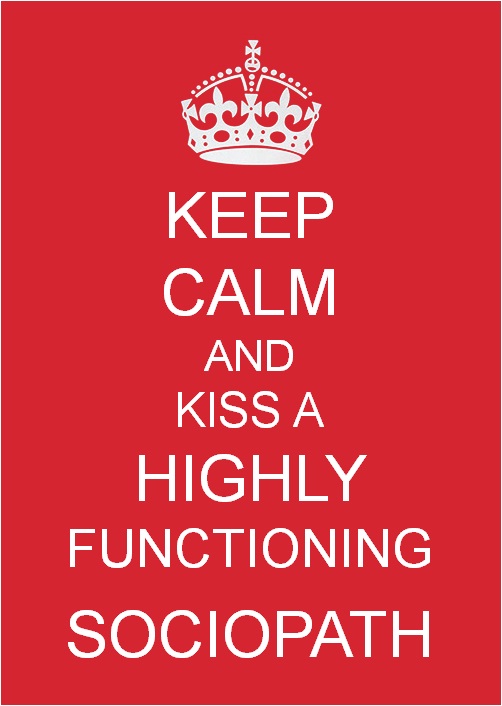 People hear the word sociopath and it conjures up images of Charles Manson, Bernie Madoff, and other serial killers, hucksters and con artists. Yes, these individuals are sociopaths, but they’re extreme and obvious ones.

Most sociopaths don’t reach the notoriety of Manson and Madoff. Even so, sociopathy is far more common than we like to think. Many people live next door to or with sociopaths, work in the adjacent cubicle or pray in the pew next to them without ever realizing it until they’re victimized or somehow exploited by these creatures.

Sociopaths who have cultivated the appearance of Susie the Soccer Mom or Larry the Little League Coach are more dangerous and do more damage because they practice and get away with their predations under the radar.

If we think of sociopathy on a continuum, there are degrees of sociopathy. There are subtle forms of sociopathy and, if you’re a woman, even socially acceptable forms of sociopathy. Many sociopaths wear masks of normalcy when in public and terrorize their nearest and dearest behind close doors; often with the assistance of Family Court and law enforcement. Instead of targeting and exploiting the general public, they target their intimate partners and family members and anyone else who gets close enough to see behind their masks.

What are the characteristics of a sociopath?

Psychologists Hervey Cleckley and Robert Hare both developed sociopathy checklists. The following characteristics are culled from their work.

Sociopaths have Jekyll and Hyde personalities and can be superficially charming. Their outward appearance is often very conventional or they disguise themselves as helpless victims. Alternately, sociopaths may come across as grandiose and narcissistic. Sociopaths come in all shapes, sizes, sexes, ethnicities and walks of life.

Sociopaths seem to have contempt for their victim’s feelings and believe their victims deserve to be hurt, taken advantage of and exploited. They have no empathy or very selective empathy (e.g., your wife shows empathy toward someone who hurts or bullies you). They lie, cheat, manipulate, and/or verbally and/or physically intimidate others to get their way or to “win.” To a sociopath, the ends justify the means.

Sociopaths may refuse to recognize that others have rights and believe they’re entitled to violate the rights of others. In fact, they often try to control and humiliate their victims. They see people as objects and value others based upon their utility and ease of exploitation rather than fellow human beings. People are either targets and opportunities for exploitation. They don’t have friends, but rather victims and accomplices who later become victims.

Sociopaths often have a gross and exaggerated sense of entitlement. They seem incapable of true love relationships and often confuse love with ability to control and exploit someone. They are unable to form healthy attachments with others.

Sociopaths seem to be able to lie very easily. You can have a video or audio recording of them perpetrating a crime or some abusive act and they will still pee on your leg and tell you it’s raining. They often believe their own lies and may even be able to pass a polygraph. They seem to lack the capacity for remorse or guilt. For example, many of my clients are more likely to squeeze blood from a stone than to receive a sincere apology from their wives, girlfriends or exes.

When sociopaths seem to be expressing positive feelings it is typically because they are mimicking others to appear socially and psychologically normal. For example, a man on the Shrink4Men forum found a note his wife wrote to herself reminding herself to act nice and to pretend to be interested in her husband’s day in order to get something she wanted from him. Warm and loving behavior may be a manipulation in order to be better able to exploit their victims. For example, they pull you close to be able to get a better swing at you – emotionally or physically.

Sociopaths have a need for extreme stimulation in order to feel emotion and are prone to feeling chronically bored. Some may resort to physical violence, gambling, drugs and alcohol, and/or promiscuity; while others create unnecessary conflict and drama for stimulation.

Sociopaths blame others for their bad behaviors and do not take personal responsibility for their actions. At their core, they are filled with rage, which is often split off and projected onto their victims. Sociopaths have poor behavioral and emotional controls and can be impulsive. They often alternate rage and abuse with small expressions of love and approval to keep their victims under their control.

Sociopaths lack boundaries and do not care how their behavior affects others. They may become enraged and/or desperate when their victims try to enforce boundaries on their abusive behaviors. They have difficulty maintaining friendships, and, is it any wonder given how they treat others?

They typically end relationships and/or try destroying former friends who have seen behind their masks. Some may have long-term friendships, but they either seem to be long-distance or friendships with incredibly damaged individuals with low self-esteem who admire the sociopath, i.e., sycophants.

Some may have a history of childhood emotional and behavioral disturbances while others do not. Some sociopathic individuals come from otherwise healthy and loving families.

Sociopaths are often irresponsible and unreliable. They have a history of breaking promises yet become enraged and vengeful if they believe someone has broken a promise to them. They have unrealistic life plans and often live beyond their means. Many live what can be described as a parasitic life in that they get through life by exploiting others.

Sociopaths may have diffuse identities. Many dramatically change their appearance or outward persona in order to exploit new victims or to avoid punishment. For example, when many of my clients met their wives and girlfriends, they feigned similar interests, beliefs, etc., and pretended to be someone they weren’t in order to secure the relationship.

Sociopaths are ungrateful and contemptuous of people who try to help and understand them. Oftentimes, they do not believe anything is wrong with them, which is why therapy rarely works. If they acknowledge a problem, they usually blame others for it. Or, if they are formally diagnosed with a mental illness or other personality disorder, they may use their diagnosis to absolve them of their abusive behaviors.

Sociopaths typically do not trust others. They can be authoritarian, paranoid and secretive. They seek relationships with others who will accept, tolerate, condone or admire their bad behavior. They like nothing better than to have a willing victim.

Sociopaths often try to control every aspect of their victims’ lives. They can be pretty territorial about their victims, which their victims often confuse with love and jealousy. It’s not about love. You’re their half-dead mouse and they don’t want any other predators messing with “their property.” A good example of this is when a woman becomes unhinged when her ex begins dating or gets remarried — especially if she’s already moved onto to another victim, er, I mean, relationship.

Lastly, and I think this characteristic will resonate with many of you, sociopaths have an emotional need to justify their crimes and demand that their victims show them gratitude, love and respect. In other words:

Sociopaths expect that their victims show gratitude for being victimized by them.

In a few days, I will post the second part of Rethinking Female Sociopathy, so please check back.