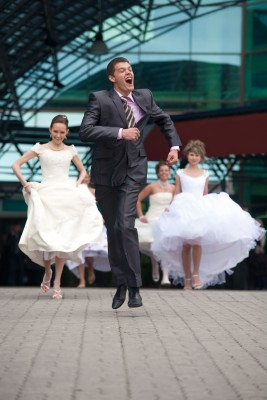 Getting married is a big gamble if you’re a man. Even a woman you think you know very well can morph into another person as soon as you say, “I do.”

While some predators and sociopaths are able to keep the mask on until after the wedding ceremony, there are still some warning signs and red flags you should look out for when choosing a prospective mate.

The following red flags are compiled from previous Shrink4Men articles and discussed on the September 26, 2011 Shrink4Men Radio program.

For those of you who listened to that program, I also threw in a few new red flags.

1. You have incompatible sex drives. SEX IS IMPORTANT. Too many people minimize the importance of having compatible sexual attitudes and sex drives. Be very clear about your expectations for your married sex life.

If your girlfriend is already withholding sex and you haven’t even proposed yet, be alarmed. If you’ve proposed and she begins to withhold sex and chalks it up to stress from planning the wedding; be alarmed. If you have sex on demand, be aware that this may come to an end after you propose or, even worse, after you say, “I do.”

2. Opposites do not attract. Opposites may initially attract, but once the novelty wears off, research (Buston and Emlen, 2003) indicates they don’t stand the test of time. Familiarity in the way we communicate and express love and affection is comforting and a strong foundation for a lasting and loving relationship.

For example, if she’s non-stop, fluctuating emotions and you have a more stable emotional landscape, this very well could become a problem in the future.

3. You have to constantly work at the relationship. Yes, you need to put some effort into relationship maintenance, but it shouldn’t be a constant, uphill struggle. If you’re stressed out and exhausted from the daily grind of your relationship, you’re probably not in the right relationship for you. You just can’t fix some problems.

It’s okay to admit this and end it.

4. You just don’t have anything in common — including values. You don’t have to like all the same things, but you should have some shared interests and, more importantly, values.

5. You’re in a state of constant conflict. Conflict is a natural part of relationships. However, there’s healthy conflict that results from disagreements and misunderstandings and then there’s high-conflict people. High-conflict partners generate toxic, never ending, irresolvable arguments, blame, and shame. Specifically, you should watch out for:

6. She makes you responsible for her happiness. If you’re responsible for making her happy, you’ll also be the person that gets blamed for her unhappiness, frustration, and the rest of life’s petite traumata, which brings us to the next red flag.

8. She tries to get too close, too fast. If she tries to insinuate herself into your other relationships and personal space too quickly, be on high alert. It may be evidence that she has poor or zero boundaries and/or is trying to close the deal before her game face mask slips off.

9. Beware of extremely possessive women. This applies to more than jealousy about your ex-girlfriends, classmates, clients or colleagues. Insecure and controlling abusers often feel jealous and threatened when you spend time with your family and friends.

If she becomes nasty and berates you about having outside interests and hobbies, it may be a warning sign that this woman will use any means necessary to isolate you from your friends and family— you know, the people who love you and will tell you that she’s nuts and you deserve to be treated better.

10. Beware of women who don’t take responsibility for their bad behavior or who blame the demise of their previous relationships entirely on their exes. Lots of men fall for this trap. They believe a woman’s tales of mistreatment or abuse by former partners and tell themselves, “I’ll show her I’m a good man. I’ll show her she can trust and love me.”

More often than not, you’ll just end up being her next jerk. Taking responsibility for her choices and holding herself accountable is a good indication that you’re probably dealing with a grown-up.

11. If a woman tells you she’s crazy, BELIEVE HER. You don’t mind a little crazy? You’d better ask for an operational definition of crazy then. People will give you warning signs about their true natures very early on — all you need do is heed their warnings.

12. Beware of princess and other royal pains in the ass like drama queens. When a woman fancies herself royalty, it denotes a level of entitlement, one-sided-ness and probably an incredible lack of empathy. She’s basically stating, “I expect you to be subservient to me. My needs and wishes trump all others.” Do you want to be a lover and equal partner or a manservant?

Self-proclaimed drama queens are draining, toxic and probably have a touch of Histrionic Personality Disorder. If you want to spend your life wading through disproportionate reactions to minor events, that’s you’re prerogative. However, pushing the broom behind the bejeweled elephant in the room eventually becomes tiresome.

13. Beware of women who view you as their own personal bank. If she likes the finer things in life, but doesn’t have the financial means to pay for them, guess who’s on the hook to pay her way through life? That’s right. You.

14. Give that family tree a good shake. As Bill Maher once said, “the shit doesn’t fall very far from the bat.”

How do her parents treat one another? How does she treat her parents? Is she on speaking terms with her family? Her father? Of course, this warning sign isn’t foolproof. Sometimes cutting abusive family members out of your life is actually a sign of good mental health.

15. Beware of the Love Bomb. Many predators drug you with praise and flattery—at first. Beware of statements like “No one’s ever made me feel this way before. I’ve never met anyone like you. I could really fall in love with you. No one has ever understood me like you. I’ve never felt this strong of a connection before.”

Be especially skeptical of these statements if they’re made in the first few weeks or hours of dating. This is a con artist’s technique called, mirroring—”using flattering statements to lift a listener’s confidence in himself.” It takes time to really get to know someone and build trust.

“Instant intimacy” is typically a sign that someone’s stroking your ego into submission and/or that they neither possess nor respect personal boundaries. It’s natural to want a love interest to notice how special and unique you are, however, this doesn’t happen overnight.

Pace your new relationships and remember, the higher the pedestal she places you upon early in the relationship, the further you’ll crash down when she kicks it out from underneath you later. Once these women “catch you,” they almost immediately begin to devalue you.

Did you know that the average marriage lasts 8 years?

Let’s say you get married in your mid- to late-twenties. 8 years in pretty much puts you at your peak earning capacity. Meanwhile, the wife has kids and becomes a stay at home mom and refuses to work. At the 8 year mark, you’re earning a good level of income, the kids are in school and she’s willingly let her job skills and resume molder.

She decides she’s bored and that you don’t pay her enough attention and files for divorce. Guess who can claim she “sacrificed her career,” that she’s the kids’ primary caregiver (at least superficially) and who will make out like a bandit during the divorce? Probably not you.

In a few days, I’ll publish the second half of this series. Meanwhile, if you’d like to listen to the embed of the Shrink4Men Radio episode that discusses this topic, you can do so here.