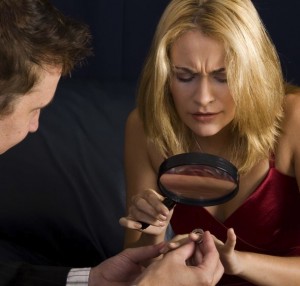 If you’re a man considering marriage, there are some statistics you should know before you go ring shopping.

Today, more than 50% of marriages in the U.S. end in divorce.

What many people don’t know is that women initiate approximately 70% of all divorces. Interesting, since men as a gender are the ones who are typically shamed for being commitment phobic and not willing to settle down.

Why is this such a disproportionate figure? Is it because men are such ogres that women are leaving marriage in droves?

An article on a marriage support website states that women primarily file for divorce because they feel “neglected.” I believe this roughly translates as: “He’s not paying enough attention to meee. He’s not making meee feel spesh-shull.”

Although this article notes that perhaps, just perhaps, many women’s expectations for marriage and intimate relationships are unreasonable, it then goes on to instruct men on how to make their wives happy, by meeting their wives’ needs for attention and including their wives in every facet of their lives and every hobby they pursue.

Nowhere in the article does it address men’s expectations and needs in the marriage and what wives can do to meet their husbands’ needs and how to make their husbands happy, which leads me to wonder, is marriage all about women and what women want and women’s feeling and needs?

What about a man’s needs, feelings and happiness? Isn’t marriage supposed to be an equal partnership?

Author and researcher Deirdre Bair finds that women are generally the initiators of divorce worldwide, not just in the U.S.. Bair states, “All of a sudden, it’s women in record numbers all over the world. It’s an epidemic.” Bair finds the primary reason women give for divorcing is emotional distance. [Women] said, ‘We just didn’t have anything in common; he never showed me any affection, or a compliment or a birthday present.'”

Out of the 70% of divorces that are initiated by women, I wonder how many of these women strong armed, guilted, shamed and used other high pressure tactics to get their now ex-husbands to marry them?

What’s more immature and selfish, not wanting to get married because you have serious doubts about the woman who wants you to marry her or getting divorced because you’re bored or don’t feel you’re receiving enough attention from your spouse?

In my opinion, the primary reason women initiate divorces in 70% of divorces cases is because most women stand to gain far more than they have to lose if they choose to divorce.

“Sorry, sweetie. I’m bored and you don’t meet my insatiable needs for attention and I’m not in love with you, in fact, I don’t know if I ever was in love with you, so it’s over. Except for supporting me with the money you work hard to earn. I still want access to that. And your retirement. What do you mean it’s ironic that I complained about how much time you spent at work while we were married to support our family because I refused to work, but still expect you to support me after the divorce with money from your job that I complained about incessantly? I sacrificed my career for you. True, I never wanted to work, but I would have had a career if you didn’t me marry me. Get it?”

This figure would probably be closer to 50% if men were able to leave dissatisfying and/or abusive marriages without the threat of being destroyed by the family court system and losing their assets and children just as most women are able to do when they initiate divorce. Would women be filing for divorce as much if there were consequences? For instance, if custody was automatically 50/50 and spousal support lasted only as long as her state’s unemployment benefits? Probably not.

Even though women initiate approximately 70% of divorces, men are frequently ordered to pay their ex-wives legal costs. So, in addition to potentially losing their assets, their homes and their children, men are also expected to pay for the privilege of being emotionally and financially eviscerated by their ex-wives.

Not only do women initiate 70% of divorces, women are awarded primary custody in 82.6% of custody cases and this figure has remained largely unchanged since the 1994 U.S. Census. While U.S. Census statistics don’t provide information on how these women obtain custody, for example, the father fought for custody, but ran out of funds and/or was victimized by a benighted family court judge, we do know the following statistics about children who do not have an active father in their lives.

Did you know that:

What’s more, 61% of all child abuse is committed by biological mothers (Department of Health and Human Services Report on Nationwide Child Abuse).

Can’t wrap your mind around that figure? Think about it. Women are awarded primary custody 84% of the time. Stay at home moms far outnumber stay at home dads. Who has the most access to children in order to perpetrate abuse? Their mothers.

Courts typically refuse to lower child support payments when a father’s income drops. The Bradley Amendment, which was passed in 1986, forbids any reduction in child support arrears, even if the father is disabled.

The amendment holds that inability to pay is no excuse and “that once a child-support obligation has been established, it can’t be retroactively reduced or forgiven by a judge.” This is why it is so very important for men to immediately file for child support adjustments as soon as you know your financial circumstances are going to change.

What’s more, the Bradley amendment ensures that even if a man can prove he is the victim of paternity fraud, that he cannot be absolved from paying child support to a child that is not his biological offspring, which brings us to another disturbing statistic.

The New Hampshire Commission on the Status of Men (2006) concluded that, “paternity fraud is a growing concern for men and children everywhere. It can spawn considerable grief for the men who may or may not be emotionally attached to a child they later discover was fathered by another; and possibly unsettling for children who may discover the false nature of their paternity.”

What about brave men who marry a second time? Men can have their new spouses’ income held against them and used to extort more child and spousal support to their ex-wives. For instance, in Massachusetts, judges frequently include a second spouse’s income as part of “total household income” and use that figure to determine whether the payor, usually a man, has enough income to keep paying spousal support.

This is nothing more than a “backhanded way of tapping into a second spouse’s income” to pay for the ex who believes she shouldn’t have to work because she was once married to her ex once upon a time or wants to maintain that magical and totally unrealistic “marital standard of living.”

However, if the ex-wife remarries, her new spouse is under no legal obligation to financially support his stepchildren. The court’s rationale? Hey, they’re not his children and, therefore, not his responsibility. Yet, it is the new wife’s responsibility to give a portion of her salary to her husband’s ex-wife and children. Can someone please explain to the logic of this to me?

I gotta tell you, as a woman, the fact that a potential husband’s ex could come after me for a portion of my salary or that I would have to support another adult and her offspring and fund their health insurance and vacations sours me on marriage.

These women are adults, most of whom are capable of supporting themselves. If they don’t want to work, let them suffer the consequences. Federal and state governments have a time limit on unemployment benefits, but many ex-husbands are legally forced to pay alimony or ex-wife unemployment benefits forever.

In many states, long after a divorce has been settled, ex-wives can come after their ex-husbands to shake down their retirement plans — even after they received a portion of the man’s retirement during the divorce settlement! In factoring a man’s ability to pay spousal support after retirement, judges can count the income from retirement accounts, including those already divided in half during the original divorce proceedings. This essentially allows some ex-wives to “double dip” into their exes’ retirement savings.

Here’s another statistic: Divorced and separated men are two and a half times more likely to commit suicide than married men. Divorce, however, doesn’t seem to lead more women to commit suicide. Separated and divorced male suicides outnumber their female counterparts by 4 to 1.

Marriage rates are on the decline in the U.S. and worldwide as many men are deciding to opt out of marriage due to the extremely unfair nature of divorce and custody “awards” and the extremely entitled attitudes of many women (MGTOW and the Herbivores) and I can’t say as I blame them.