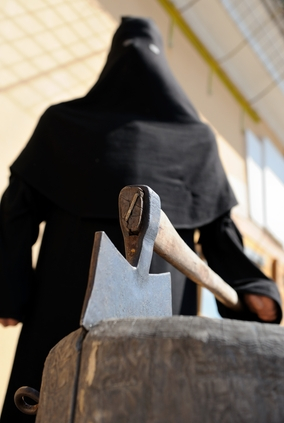 The following piece is written by Utah family law attorney, Eric Johnson, and originally appears on his website, www.divorceutah.com. Mr Johnson has given me his permission to publish it here. I first saw Mr Johnson’s post referenced on Fathers & Families and am grateful to be able to share it here on Shrink4Men. Thank you, Mr Johnson!

In a recent online forum in which I participate, the this issue was raised by a fellow attorney:

“The more custody cases I handle the more I am starting to believe 50/50 shared physical custody is rarely in the best interest of the children.”

In the spirit of Jonathan Swift, I responded as follows:

It’s all about the children. Parents? No! The interests of society at large?  No! Children!!! Will somebody please think of the dewy, doe-eyed, delicate children! To hell with the parent’s interest in maintaining as close a relationship and as close of contact with his/her children after divorce. Forget the tragic toll of divorce on public life.  Joint custody is filled with risks (and we must never ever expose a child to risk) and the potential for inconvenience. We must eliminate risk and hardship at all costs.

So why not just kill one of the divorcing parents (giving his/her life insurance proceeds to the surviving parent, of course) for the sake of the precious children? The children will adapt. Lots of children have parents who die young, and while they may suffer initially, they learn to deal with it with the help of the stalwart surviving parent. It’s not the end of the world. Besides, killing a parent off has many advantages “for” the child (and if it happens to result in the court and attorneys not having to be bothered by those pesky divorce cases, so much the better):

1. It not merely reduces inter-parental conflict, it guarantees to eliminate it. As a corollary, it eliminates the possibility of child custody ever coming before the court again (unless, of course, the custodial parent goes crazy or poops out being a sole custodian and has to be replaced with foster care parents, but I digress);

2. It also eliminates the hardship on the children caused by shuttling them back and forth between their parents’ respective residences;

3) Eliminates that feeling of the children being “torn” between loyalty to one parent or the other;

4) Eliminates the awkwardness of children having to admit their parents are divorced;

5) In the U.S., the child may qualify for Social Security Survivor benefits;

6. Eliminates the very possibility of the children growing apart from the noncustodial parent;

8. By killing the noncustodial parent, the “best” parent survives, so that the children are not confused or hampered in any way by the difference in their parents’ respective parenting styles. Simplify. Reduce complexity;

9. Eliminates the need for contingency plans in the event of relocation of the custodial parent;

10. Eliminates the hassle of step children and after-born half-siblings dividing the noncustodial parents’ affections and mucking up the visitation schedule;

11. Has the fringe benefit of making the issue of alimony moot;

12. Hey, if you’re going to litigate so fiercely over child custody anyway, you might as well go all in, eh?

So order the noncustodial parent killed. Everyone benefits, especially children. Yes, certain sacrifices must be made, but if it means a child is spared the troubles I list above, isn’t it worth it? We’ve seen the alternatives, and they are just too messy.

Which brings me to another brilliant idea: require all men and women to be sterilized as a prerequisite to marriage. ‘Wouldn’t want to run the risk of them bringing children into the world and then divorcing now, would we?

The quest for certainty and finality breeds absurdity, my friends. To criticize joint custody on the basis that sometimes–despite our best intentions–it’s the wrong fit and sometimes hurts some kids is to criticize the fact that life is unfair (and it also glosses over the fact that sole custody has hardly been proven to be a reliable or preferable fallback position).

An extreme solution (and a bit of gallows humor), but it effectively highlights the absurdity and broken-ness of family law and court practices. The scary thing is, though, that I’m sure there are many high-conflict exes who would be in favor of this as long as they could cash out the non-custodial father’s life insurance policies. Custody should be default 50/50 shared physical custody, unless a strong argument with ACTUAL EVIDENCE can be made for a different arrangement.