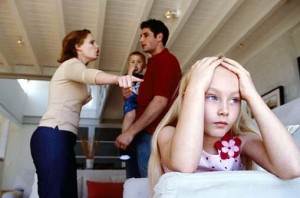 The only reason many men stay in unhappy relationships with abusive women is out of love and concern for their children. I’ve lost count of how many of my coaching clients have said, “If it weren’t for the kids, I’d have left a long time ago.”  Some men stay because they believe they’re protecting their children from abuse or acting as an “abuse buffer.” Some men stay to be certain that at least one parent  is giving care and attention to the kids. Some men stay to give the kids at least one good adult role model. Some men justify staying by telling themselves, “She’s not abusing the kid(s), just me and I can take it.”

Some men stay because they’re afraid if they make the healthy choice—ending the relationship—that their wife or girlfriend will limit or deny access to the children and teach the children to hate them (Parental Alienation). If the mother in question is a high-conflict and/or abusive personality-disordered individual (APDI), these fears are most likely well-founded.

Finally, some men stay because they believe divorce will be too traumatic for the children, which begs the question, is ending an unhealthy, abusive marriage more traumatic than exposing your kids to spousal abuse throughout the course of their childhood? Are well-intentioned men protecting their children by remaining in abusive environments or are they exposing them to harmful neurotoxins that will negatively impact their psychological development and ability to have healthy adult love relationships?

You don’t need to be a shrink or neurobiologist to recognize that it’s harmful for children to witness abuse—psychological, emotional and/or physical—but how harmful is it? Is it better for your children if you stay with their abusive mother or is it better for you to end the relationship and offer your children a second home, free from abuse? *That is if you can get a fair custody settlement.

Dr Douglas Fields, PhD writes in Rudeness is a Neurotoxin:

Stress is a neurotoxin, especially during development of a child’s brain. Studies have shown that children exposed to serious psychological trauma during childhood are at risk of suffering increased psychiatric disorders, including depression, anger, hostility, drug abuse, suicidal ideation, loneliness and even psychosis as adults. Using modern brain imaging, the physical damage to these children’s brain development can be seen as clearly as a bone fracture on an X-ray. Early-childhood sexual abuse, physical abuse and witnessing domestic violence undermine the normal wiring of brain circuits, especially those circuits connecting the left and right sides of the brain through a massive bundle of connections called the corpus callosum. Impairment in integrating information between right and left hemispheres is associated with increased risk of craving, drug abuse and dependence, and a weakened ability to make moral judgments. 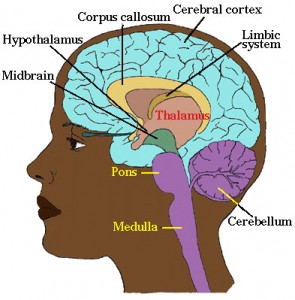 Corpus callosum abnormalities have also been implicated in individuals with sociopathy or sociopathic traits, Borderline Personality Disorder and Narcissistic Personality Disorder, and, I suspect, other high-conflict personality disorders. According to MentalHealthMatters.com: “Abused and neglected children exhibit a variety of behaviors that can lead to any number of diagnoses. However, the effect of early abuse and neglect on the child can be seen in just a few critical areas of development. These areas include emotional regulation, response flexibility, a coherent integrated sense of self across time, the ability to engage in affect attunement with significant others (empathy and emotional connectedness), and conscience development.”

Exposing children to abuse, even if the abuse is not directly aimed at the child, is still a form of child abuse. Essentially, exposing children to a parent who is abusive, models abusive traits and behaviors, has emotional regulation deficits (i.e., borderline traits), has difficulty developing and maintaining emotional connections, has a chaotic and unintegrated sense of self, is lacking empathy and isn’t capable of affective attunement places a great deal of stress on the child and his or her developing brain. By remaining in an abusive relationship and not providing your child(ren) with a healthy, alternative home, you may be helping to create another generation of abusive and potentially personality-disordered individuals. We need more research to determine if having an alternate healthy environment helps reduce these risks.

A series of studies by a group of psychiatrists and brain imaging scientists lead by Martin Teicher, of Harvard Medical School, shows that even hostile words in the form of verbal abuse can cause these brain changes and enduring psychiatric risks for young adults. In a study published in 2006, the researchers showed that parental verbal abuse was more strongly associated with these detrimental effects on brain development than was parental physical abuse. In a new study published in the July issue of the American Journal of Psychiatry, they report that exposure to verbal abuse from peers is associated with elevated psychiatric symptoms and corpus callosum abnormalities. The main causes are stress hormones, changes in inhibitory neurotransmitters, and environmental experience affecting the formation of myelin electrical insulation on nerve fibers. The most sensitive period for verbal abuse from peers in impairing brain development was exposure during the middle school years. Why? Because this is the period of life when these connections are developing in the human brain, and wiring of the human brain is greatly influenced by environmental experience.

The decision to end an abusive relationship should be a relatively easy one. Unfortunately, when children are involved, the decision becomes incredibly complex—especially for men because of the double-standard and unfair bias toward women/mothers present in Family Law. Fathers in abusive relationships often have to make the ultimate sacrifice that we would never require of mothers in similar situations—namely, to choose between their own well-being and protecting and maintaining a  loving relationship with their children.

Why do we put fathers into this double bind? Why should kind and loving fathers have to make the choice between their own physical and mental well-being and their children? Our system bends over backwards to help abused women to protect themselves and their children. Why aren’t fathers and their children who are being abused by female partners afforded the same supports and services? Why do many judges, attorneys and custody evaluators fall down and pray at the altar of the Golden Uterus—even when there is real evidence of emotional and/or physical abuse abuse toward men? Furthermore, even if the courts recognize that the mother is abusive toward the father, why is she awarded at least 50/50 custody and often more in most cases?

These are mostly rhetorical questions, but I’d love some real answers and real solutions to them.