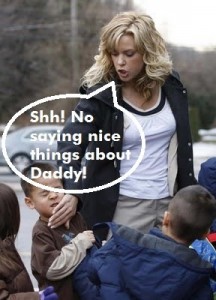 Parental Alienation Syndrome (PAS) and Hostile Aggressive Parenting (HAP) are controversial subjects. The field of Psychology has yet to officially legitimize its existence by including it in the current and upcoming edition of the DSM-V (Diagnostic and Statistical Manual of Mental Disorders) despite there being an ever growing body of research that proves it is a very real, destructive and painful phenomenon for children and the parental target.

Clawar and Rivlin (1991) write about PAS and HAP using different terms. They call it what it is: the programming and brainwashing of children to hate ‘the other’ or targeted parent. Attorneys and mental health professionals who work in the legal system use the terms brainwashing and programming to reference different things including “the manipulation of the actual message content (thoughts and beliefs), negative modeling, coercion of ideas, limiting of choices, and/or the result of a (long) process of programming and brainwashing (alienation)” (Gardner, 1982). Clawar and Rivlin believe that alienation is just one result of a very complicated process and campaign of hatred.

Programming. When one parent attempts to alienate a child from the other parent, she’s essentially teaching the child to hate and fear the other parent. Hatred of the other parent is the end goal or program. It’s like installing computer software—there are directions, procedures and instructions for how to organize information. For example, the other parent is late for the scheduled child visitation pick-up. The programming parent comments, “A good parent who really loves his children would be on time.” This is a set of instruction that translates to: “Your father is a bad parent who doesn’t love you.” This is a negative interpretation of what is most likely a neutral event, but the set of directions from the offending parent don’t allow for neutral interpretations like heavy traffic, a flat tire or being held up at work.

The alienating parent teaches the child the program via messages that include verbal and non-verbal cues and rewards and punishment. Brainwashing techniques can be used separately or in combination for a more powerful effect. The alienating parent often uses allies such as friends, family, church members, therapists and the court system to help her or him successfully alienate. Programming and brainwashing typically work in tandem. For example:

The program: You should hate your father and be as angry with him as I am.

The brainwashing techniques: Mother makes faces when child is on the phone with father, rolling eyes and grimacing. Mother asks child questions after child spends time with father and makes negative and fear-instilling statements such as, “Did he remember to feed you? Are you scared sleeping there at night? You can come home if you want to–just call me and tell your father to bring you home. You have more fun with me, don’t you? If it weren’t for me making your father take care of us, he’d spend all his money on his new wife and her kids and we wouldn’t have a roof over our heads.” Mother removes all photos of father from child’s room, computer or photo albums. Mother rewards child with special privileges, gifts or affection if child makes negative statements about the father or refuses to see the father.

Isolation serves to keep the child from receiving information that contradicts the program. For example, friends and family members who don’t buy into the abusive parent’s program are vilified and cut out of the child’s life. There is often collateral damage when a parent chooses to alienate because the child is often denied access to grandparents, aunts, uncles and other people who love them.

The stripping process can be physical (taking away toys or privileges) or emotional (withholding love and affection). Repetition or repeating the message or program is essential in any kind of learning endeavor. Remember, the abusive parent is teaching the child to fear and hate the other parent ( and anyone who doesn’t collude with her) and disavow his or her normal and natural feelings of love for the other parent.

We-ness is a sociological term used to distinguish an in-group from an out-group. The alienating parent defines all out-group members as unacceptable. For example, It’s Mom and kids vs. the world. It’s just the three of us now. No one understands us. We have to look out for and protect each other. The targeted parent becomes the outsider from whom the children must be protected.

Inferior status involves making the child feel unfavored or less loved. “Children are keenly aware of being less favored by a parent. Lowering of status within the family can be done by exclusion, rejection, or denial of affectionate contact; it is extremely painful, and, in and of itself, may be powerful enough to bring the child in line with the parental programme” (Clawar & Rivlin, 1991, p. 4). For example, a 10-year old boy sees how his sister is rewarded with praise and gets to stay up late with mom to watch TV for rejecting their father and actively being rude to him, so the boy follows suit in order to raise his family status.

How Do You Counter Programming and Brainwashing?

The fact that this often happens unconsciously and unintentionally is bad enough. Adults who consciously and actively engage in these behaviors are reprehensible. This is a form of child abuse for which there are rarely repercussions for the offending parent. In many cases, alienation begins while the marriage is still intact and very early on in a child’s life.

It happens when Mom says something that makes Dad look incompetent or uncaring. Your father can’t be trusted with the simplest task. Mom to the rescue! Or, Your father cares more about his career than us. That’s why he spends so much time at the office. Never mind that Mom refuses to get a job to contribute to the household, which would allow Dad to spend more time at home. Or, Good Christians go to Church, which is why your mother is going to go to hell. The devil has your mother.

If you know this is occurring, you need to do some gentle, but firm reality testing with your kids as soon as possible. Kids typically can’t substantiate the programs they parrot. Gently ask them to give you examples of when you were mean or selfish or never spent any time with them or whatever the accusation is. Show them pictures of you having fun together. Remind them of when you took time of from work to take care of them when they were sick. Ask them if those are the actions of a bad parent who doesn’t love them.

You also need to get your kids into therapy with a mental health professional who understands the reality of parental alienation and how to combat it. The longer you let this go on without intervention, the more difficult it will be to undo the damage. I recommend any parent, man or woman, who’s about to begin the divorce process to insist upon joint counseling specifically to educate both parents about this issue and the lasting psychological damage it can inflict upon children and ‘other’ parents who are the victims of it.

Granted, if your co-parent is hellbent on destruction, there may not be anything you can do to stop her or him right away, but you can get the documentation ball rolling and the sooner the better.