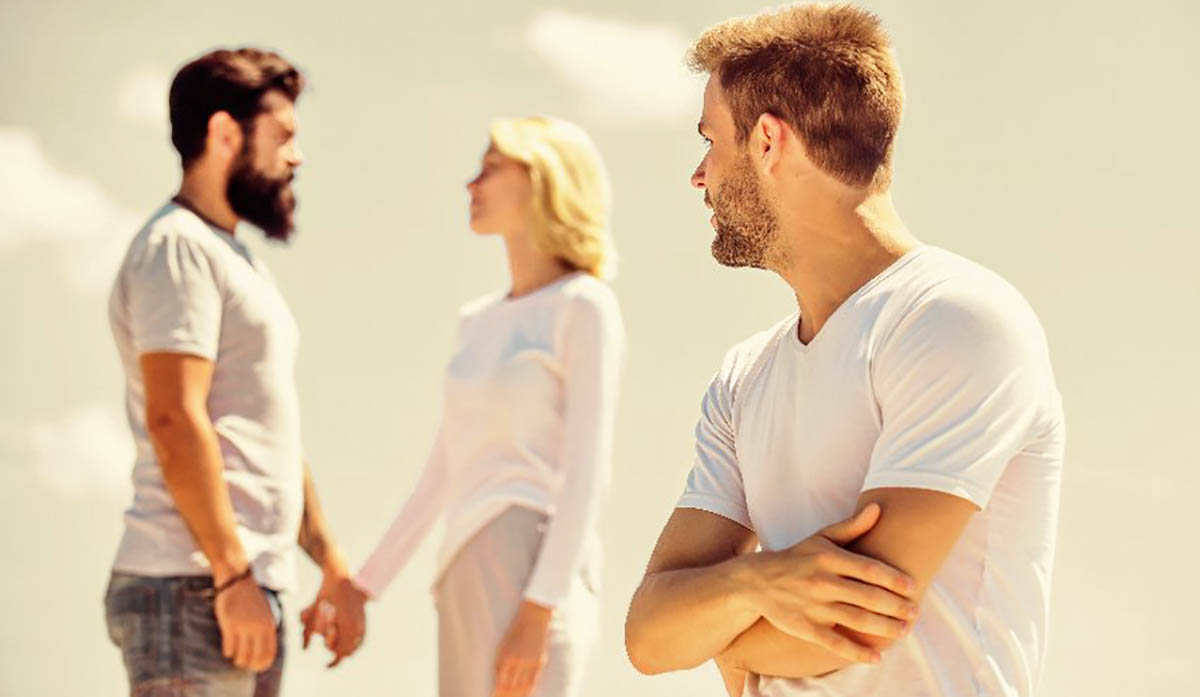 Will my BPD ex be different with the next guy? Am I giving up too soon? If I try a little more, maybe things can go back to the way they were? Will the next guy get all the love, sex and the nice version of her I could have again if I just hang in a little longer and love her harder?

Of course, they will. That’s how they operate. Idealize, devalue, discard (boomerang, Hoover, discard). Sure, she or he will make some superficial changes to their false self during the love bombing stage with the next victim. However, there won’t be any meaningful changes. Specifically, changes that make it possible to have a healthy relationship that isn’t characterized by conflict, manipulation and abuse.

In other words, the window dressing may change, but it’ll be the same shitshow behind the blinds you’ve already had the misfortune to experience.

For example, she’s suddenly posting Instagram pics of venison dishes because the next guy is into game hunting. During your relationship, she was a vegan and raged whenever you indulged in an occasional cheeseburger. Another example, now that she’s with the next gal, she’s the life of the party. She and the new supply are all over social media at restaurants, clubs, etc. When you were together, you had to beg her to go out with you.

Rest assured, once the devaluation stage begins with the next guy whatever it is she’s been pretending to be will also come to an end. Just like it did with you. And that will be the fault of the next guy’s fault. Just like you were blamed for your BPD ex’s extreme “personality change.”

Do borderlines, narcissists and histrionics change in the ways that matter?

Like developing integrity, a conscience and empathy? Becoming emotionally and psychologically stable and mature? Do they become accountable adults who take ownership of their choices and behavior? You know, the qualities that make it possible to have a healthy, loving relationship?

Again, any changes the BPD/NPD/HPD ex makes in their next relationship are cosmetic tweaks. They’re superficial adjustments to their love bombing tactics, not positive personal emotional and psychological growth. The changes are target specific. When a borderline, narcissist or histrionic love bombs you, they mirror you. Ergo, when they love bomb someone else, they mirror the next guy’s identity, hobbies and values. Hence, the “changes.”

Furthermore, the borderline or narcissist’s personality doesn’t change. Rather, they reveal who they are as the love bombing ends. They may change tactics in terms of how they manipulate and abuse, or give themselves a public image makeover. However, who they are doesn’t fundamentally change. Thus, their true personality is revealed (not changed) once the love bombing stage ends. See the difference?

The love bombing or idealization stage has an expiration date.

Typically, relationships with borderlines, narcissists and histrionics are like a meal in reverse. It begins with an all you can eat dessert buffet, followed by a perfectly grilled steak. Then, it ends in the devaluation slaughterhouse where you receive the proverbial bolt to the head and are harvested for parts. Basically, you get all the so-called “good stuff” at the whirlwind beginning of the relationship.

And you get the good stuff for relatively little effort. It’s like “magic!” It’s instant connection, instant intimacy, instant trust, instant love — and instant bullshit. Then you’re hooked. Once you’re psychologically dependent on the BPD/NPD/HPD to feel good about yourself, you pay and pay until you’ve nothing left to give. Then you’re discarded, or kept on standby in case the NPD/BPD needs your for something. In healthy relationships, trust, intimacy, emotional attunement, etc., are established over time. Not a 36-hour first date.

Again, the love bombing expires after you develop a strong enough attachment to the BPD/NPD/HPD  and/or bind yourself to them in a way it’s difficult to undo (e.g., marriage, kids). This is one of the reasons it can be so painful to end the relationship once the borderline or narcissist’s mask falls away and the abuse begins in earnest.

Frequently, the devaluation stage begins with gradual boundary tests. For example, a “bad day tantrum” here, and a “your friends are more important than me” silent treatment there. In other words, they test your boundaries in terms of how much abuse you’ll tolerate. In reality, you already flunked the first round of boundary tests during the love bombing phase.

Love bombing is a boundary test. As in do you have any boundaries? For example, did you:

Your susceptibility to being love bombed is the first boundary test. Healthy non-codependent people don’t eagerly lap up love bombing like a thirsty animal at a watering hole in the Sahara. To healthier adults, love bombing feels inauthentic and too much too soon.

Once the borderline or narcissist determines (consciously or unconsciously) that you don’t have any boundaries (or, flimsy negotiable ones) the roller coaster car leaves the station. These individuals can be the most flattering of mirrors. After the emotional dependency on the BPD/NPD is established, the painful boundary tests begin.

For example, will you tolerate tantrums, double standards and other form abuse and not hold the borderline, narcissist or histrionic accountable? If you do, the devaluation stage begins and the second big con job commences. If you won’t tolerate their bad behavior, the relationship ends. Either you end it because you have enough self-respect to walk away. Or, the BPD/NPD/HPD ends it in a blaze of projection, gaslighting and victim playing. Whichever way it occurs, good riddance!

A relationships with a BPD, NPD or HPD is one long con job.

Love bombing is a lie. Yes, I know it felt real, and your feelings were real. Nevertheless, love bombing is a lie. What else do you call it when someone pretends to be someone they’re not in order to manipulate you into trusting, admiring and loving them, so they can then hurt and exploit you?

The nightmare at the and of the relationship is the same person you met at the beginning of the relationship. You just couldn’t see it. Or, perhaps you ignored some early red flags. The ideal person you believed them to be was a mask. Underneath the mask is the professional victim who will later sneer at you with contempt as they abuse you. And then claim that you abused them.

So, when you’re desperate to return to the beginning of the relationship, you’re actually yearning to return to the lie. Furthermore, if the BPD ex (or NPD ex) hides these qualities and behaviors while seducing you, it shows some degree of awareness. Specifically, that if they reveal the angry destructive toddler on the first date, there likely won’t be many second dates. It’s a con job.

The second con job begins as the love bombing ends. Love bombing can come to a body jarring halt, or occur gradually. Either way, the second big lie is that it’s all your fault. That their disinterest, cruelty and generally shitty behavior is your fault and it’s your job to make everything better.

So, what exactly have you done to turn your adoring “soulmate” into a petulant, angry, emotionally volatile, etc., etc.?

Something you did or didn’t do; something you’re doing too much or not doing enough. You love your family, friends and dog more than you love them. All you care about is work; you don’t work enough so she doesn’t have to work and can focus on her Etsy art. Then, you work too much and don’t have enough time for her, so it’s all your fault she has to cheat on you. You only workout regularly so other women or men will be attracted to you. Yet, they don’t want to have sex with you because you’re not in shape anymore.

You haven’t changed. And it’s not all your fault. The devaluation would occur even if it were possible to be the “perfect” man or woman. For that matter, the BPD/NPD/HPD hasn’t changed either. In fact, you’re beginning to see the first glimpses behind the facade of their false self.

Interestingly, the qualities the BPD/NPD claim first attracted them to you, are also the reasons they use to devalue you. As such, you need to change everything about yourself and become someone you’re not, so that the BPD/NPD will go back to pretending to be someone they’re not.

Let’s break the mindfuck down:

True personality change is difficult and rare. We can change bad habits, break unhealthy patterns and learn more adaptive ways of relating to others. However, these changes aren’t possible without taking responsibility for our choices and recognizing the need for change. By their very nature, personality disordered individuals are incapable of this. Even when some infrequently acknowledge wrongdoing, they blame others, play victim and demand love and support despite their ongoing abuse.

Yes, but will my BPD ex be different with the next guy?

Yes and no. The love bomb persona they adopt may differ, but it mask the same clusterfuck of character pathology. Your fear of missing out on love is likely an indicator of your own unresolved childhood issues. In my practice, I see this as evidence of a wounded child who’s still desperate for the love of a rejecting, abusive parent.

Kids who feel unloved by mom and dad believe it’s their fault. As such, they have to believe if they can be better/do better, they’ll be able to get their parents love. Isn’t the fear an abusive NPD/BPD/HPD ex will somehow miraculously change into a loving decent human being the same kind of magical thinking a wounded unloved child engages in? If this applies to you, you can’t heal those childhood wounds by incurring more abuse from the BPD/NPD ex.