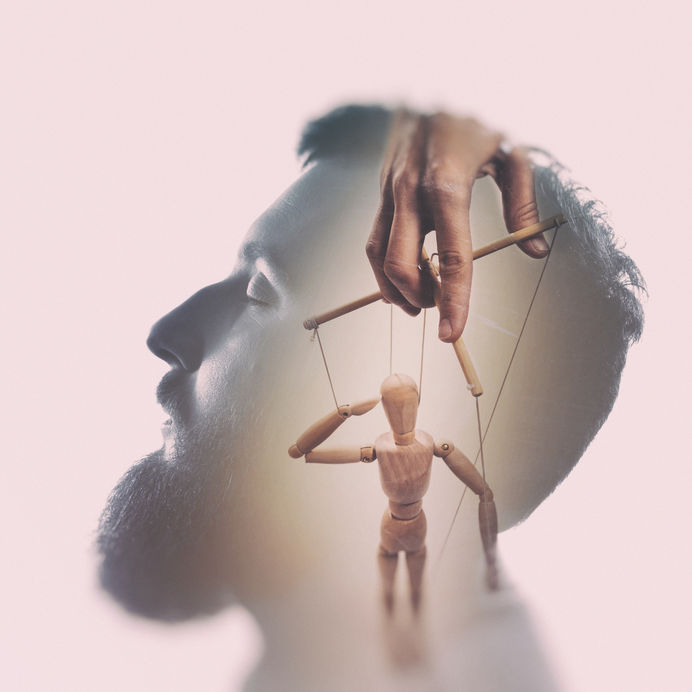 In part one of Love Bombing, Brainwashing, Trauma Bonds, Narcissists and Borderlines, I examine brainwashing techniques used by cults, POW camps, political movements and manipulative personalities such as narcissists, borderlines, histrionics and psychopaths. I also explore where and how the brainwashing tactics differ and diverge between cults and abusive individuals.

Specifically, cults break down a member’s identity and belief system. Then rebuild the member’s identity in accordance with the cult’s belief system or ideology. Once an individuals forgoes their former identity, relationships and life, the abuse stops and “salvation” is reached. For as long as the individual adheres to and acts in accordance with the cult ideology, that is.

In cult-like intimate relationships, there’s also a dismantling and loss of identity. This occurs during the devaluation stage of the relationship, which follows the idealization/love bombing stage. Both the love bombing and devaluation are usually more gradual and less obvious than cult recruitment. There are similarities, though.

Breaking down your identity.

Cults have recruiters and members who love bomb, and welcome new victims by offering a sense of belonging. Individual narcissists and borderlines also often have advocates who perform similar functions. They’re sometimes referred to as flying monkeys, cheerleaders and minions. They tell you what great people Bob the Borderline or Nancy the Narcissist are, how horrible their exes were and how special you must be. Occasionally, a family member of the NPD/BPD warns a client, but they usually disregard the warning.

In the intimate relationship, there isn’t a path to “salvation.” Narcissists and borderlines continue to break you down or devalue until one of you dies or the relationship ends. They don’t rebuild your identity, nor do they have an ideology beyond, “It’s all about me, my wants needs and feelings” and “I’m always right. You’re always wrong. Make it up to me. You owe me.” They either discard you, or justify their infidelities and triangles because of your brokenness. Never mind the very large role they played in breaking you.

Bullies, con artists, cults and other predators like easy targets. They go after people who are kind, generous, trusting, eager to please, conscientious, competent, talented or “gifted” and, most importantly, people who have a desire to cooperate and find compromise (Namie, 2003). I refer to these qualities as the three N’s: nice, naive and non-confrontational.

Cults and individual narcissists also target the emotionally and/or psychologically vulnerable. Many clients became involved with their abusive partners during or shortly after a stressful life event. For example, divorce, death of a loved one, prolonged illness, changing jobs, moving to a new city, etc.

During periods of heightened stress, some people are more susceptible to an individual or a group claiming to have all the answers and/or offers instant companionship or instant intimacy. This is especially true if the individual has historically felt a lack of connection, otherness or not fitting in and familial and/or social unworthiness and rejection.

Michael Langone, PhD identified 5 common traits of cult victims that, in my clinical experience, are similar to people who are targeted by emotional predators. They include:

1. Dependent: An intense desire for a sense of belonging, approval, acceptance and a fear of being alone.

2. Unassertive: Non-confrontational, people pleasers who are reluctant to question authority.

3. Gullible: A willingness to believe what another person says without critically thinking it through or challenging it.

4. Naive idealism: The belief that everyone is good, has some redeeming quality or can change for the better despite all evidence to the contrary.

5. Desire for spiritual meaning: The belief in fate, that life has a “higher purpose” or “everything happens for a reason.” There are bad people in the world and the only meaning or fate involved is the repetition compulsion of childhood/adolescent family of origin trauma. people are just abusive jerks and there’s no deeper meaning attached to it, but good targets keep searching for it.

Necessary conditions for brainwashing and grooming by narcissists:

The personality traits identified by Dr. Langone and a state of heightened stress aren’t sufficient to brainwash or groom a potential victim. A conscious or instinctual knowledge of mind control techniques is also necessary. Margaret Singer, PhD identified six conditions necessary for brainwashing or thought reform. Many cult leaders study these principles and know exactly what they’re doing. I doubt my clients partners and exes have studied these techniques, but rather operate on a combination of instinct and dysfunctional interpersonal relating learned in their families of origin and trial and error.

On the other hand, the high functioning ones often know exactly what they’re doing and why they’re doing it. If someone is consciously and purposefully engages in these behaviors with premeditation, you should regard them as dangerous. It’s highly likely they’re full-blown psychopaths.

1. “Keep the person unaware of what is going on and how he is being changed one step at a time.” Many abuse victims liken the process of going from love bombing to devaluation to being a frog in a pot of cool water that gradually heats to a roiling boil.

2. “Control the person’s social and/or physical environment; especially control the person’s time.” Abusers commonly isolate the their victims from friends and family. They don’t want you talking to outsiders who might challenge the “reality” they distort you or a challenge to their control/ownership of you.

3. “Systematically create a sense of powerlessness in the person.” Clients have often developed a sense of learned helplessness. This occurs when you’re repeatedly placed into no-win situations.

4. “Manipulate a system of rewards and punishments in order to inhibit the person’s natural personality and behavior.” Abusive, exploitative relationships often have a strong trauma bond that keeps a victim stuck. Trauma bonds are difficult to break because abusers are intermittently kind and loving in between the cycles of abuse.

5. “Manipulate a system of rewards and punishments in order to promote the group’s ideology or belief system and group-approved behaviors.” In other words, the narcissist or borderline is right. They’re always right. Don’t question them. Don’t challenge them. They come first. You live to serve. In intimate relationships (as opposed to cults), the “reward” is a cease fire in conflict or a short period in which the abusive behaviors are absent. In other words, infrequent moments of “normalcy.”

6. “Put forth a closed system of logic and an authoritarian structure that permits no feedback and refuses to be modified except by leadership approval or executive order.” The group has a top-down, pyramid structure. “The leader must have verbal ways of never losing” (Singer, M., 1996, p.64-69). See my Narcissist Fight Club article series for a more detailed understanding of this phenomenon.

These individuals can be mental and verbal contortionists/escape artists. They’re able to twist the most obvious set of facts into a Gordian knot and find ways to evade the conversation by changing the subject (derailing and tangenting) or attacking you on a new front.

Cults and abusers create feelings of guilt, covert and overt fear, powerlessness and dependency in their victims in several ways.

Manipulation, deception and love bombing are how cult recruiters and emotional predators get their foot in the door. They lure you in by misrepresenting themselves, lying, hiding their abusive nature and drugging you with praise and affection. Once they insinuate themselves into your life and you have become dependent on them to feel good about yourself, the overt abuse ensues. First, let’s look at their seduction and relationship building tactics.

Both cult recruiters and emotional predators employ manipulation and deception to ensnare their targets. Initially, they hide their true natures and intentions and wear a carefully crafted, too-good-to-be-true persona. “Recruiters identify the specific needs or desires of their targets and play to them. They learn to pick up on a person’s fears and vulnerabilities and portray [themselves] accordingly” (Layton).

Many histrionics, narcissists, psychopaths and borderlines, are natural born actors and shape shifters. They intuitively discern what you want—e.g., sexy, sweet, adventurous, sporty, artsy, etc.—and play it and you to the hilt. As soon as they’re secure in the attachment, the facade drops away and the emotional and/or physical abuse starts. They misrepresent themselves to potential partners. Sometimes they’re impossible to detect until you’re in over your head.

Furthermore, most abusers aren’t abusive all the time. If they were nasty the majority of the time, most (sane) people would keep their distance. This forges a powerful betrayal or trauma bond. It’s difficult for some clients to let go of the fantasy woman they fell in love with. The person who love bombed you simply doesn’t exist.

Cult recruiters and many emotional predators drug you with love, admiration, validation, affection, adoration, flattery, laser beam attention, responsiveness and sexual and non-sexual touching. They hang on your every word and create a sense of instant rapport, connection and intimacy. Margaret Singer (1996) describes the technique:

As soon as any interest is shown by the recruits, they may be love bombed by the recruiter or other cult members. This process of feigning friendship and interest in the recruit was . . . part of their program for luring people in. Love bombing is a coordinated effort, usually under the direction of leadership, that involves long-term members’ flooding recruits and newer members with flattery, verbal seduction, affectionate but usually nonsexual touching, and lots of attention to their every remark. Love bombing – or the offer of instant companionship – is a deceptive ploy accounting for many successful recruitment drives.

Many people are seduced by this kind of behavior. Everyone wants to feel special. Successful predators play to your ego needs and then turn the tables, which is why it can be so difficult to break away once the devaluation and abuse begins. Again, you long for the narcissist or borderline to return to the kind, loving person they were when you first met. You convince yourself that’s the real person and the abusive, hostile, controlling, self-absorbed, confrontational, passive-aggressive, uncompassionate jerk is the aberration. In reality, the opposite is true.

This is how emotional predators and cults seduce you. They flatter you and make you feel special — at first. Once you’re hooked on the flattery and attention, the confusion and pain begin. In Part 3, I’ll explore how cults and emotional predators break you down and keep you down. Meanwhile, don’t drink the Kool-Aid.