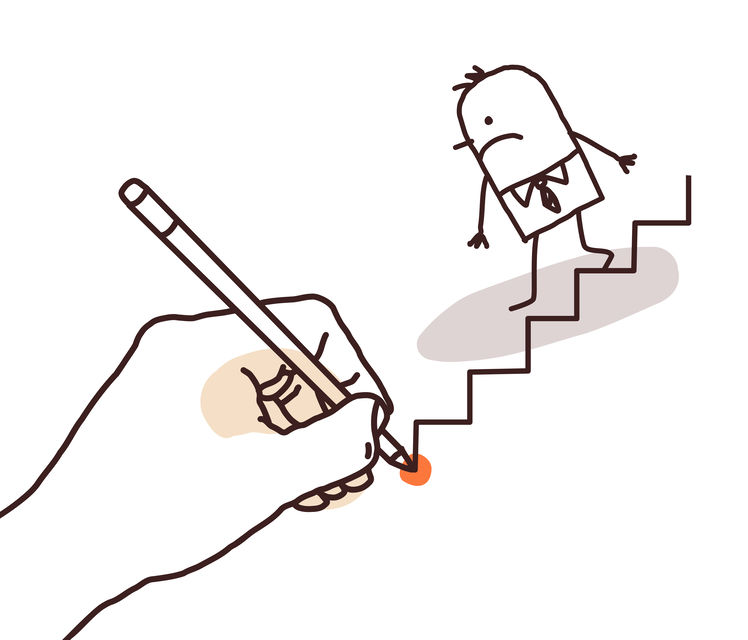 “Do narcissists have a line they won’t cross? Is there a low too low for them to go? Do they eventually see the error of their ways? Do they ever hit rock bottom?”  I’ve been asked these questions more times than I can recall. In most cases, what clients are really asking is, “Can my narcissistic wife, girlfriend, husband, boyfriend, child, parent or sibling change? Will they ever get better? Will we ever go back to those halcyon love bombing days?”

Hitting rock bottom is an addictions treatment term. It’s the lowest self-destructive point to which the addict must sink before she or he admits they have a problem and seeks help. Do narcissists ever hit rock bottom? Do they change?

In my experience, the answer is NO. Narcissists may eventually hit a Wall of Accountability, but that’s different than hitting bottom (more on this later). So just how low can a narcissist go?

Science hasn’t invented a way to measure the subterranean depths yet. Narcissists will go as low as they’re allowed to go, and then go a lot lower. In fact, the more they get away with their stunts, exploitations and other shadiness, the bolder and more reckless they become. Some narcissists only misbehave and abuse others in private. Some narcissists predate shamelessly in full public view. You may find this hard to believe, but there are narcissists who are actually proud of their narcissism.

Many narcissists confuse their antisocial behaviors and attitudes for power. Power can be wielded by instilling either fear or respect. If a narcissist can’t earn the respect of others then fear will do just fine. Deep down, most narcissists hunger for respect and admiration. However, they lack the basic qualities most non-disordered people admire such as integrity, decency, genuine talent, a good work ethic, maturity and wisdom. Wisdom is not the same as intelligence. Therefore, narcissists rely on superficial charm, con artistry, professional victimhood, intimidation or a combination of all of the above to acquire power, control and admiration.

Wisdom is the right use of knowledge. To know is not to be wise. Many men know a great deal, and are all the greater fools for it. There is no fool so great a fool as a knowing fool. But to know how to use knowledge is to have wisdom.”(Charles Haddon Spurgeon)

Narcissists bulldoze boundaries, social norms and basic decency. They lie, bully, cheat, steal, set their victims up to be damaged, make empty promises, assault, tantrum, guilt trip, smear, gaslight, seduce and/or use sex in order to get whatever it is they want at any given moment. Narcissists also recruit enablers, negative advocates, flying monkeys and sometimes straight up thugs to achieve their aims.

Narcissists don’t care. They just don’t. Expecting your narcissistic spouse or ex to show you mercy is like expecting a snake not to slither. Even if they feel a twinge of shame about their behavior, that shame will very quickly be directed into a rageful attack at the person whom they’ve hurt. If someone lacks empathy, integrity and a conscience, there’s no low that’s too low for them to go. Narcissists put themselves first above all else. This includes their own children.

Typically, a narcissist doesn’t stop narcissisting because they hit rock bottom. Because there is no bottom. There’s almost always another line that can be crossed, a new degradation or humiliation of a loved one, another lie to blast out of their lying liar hole (i.e., their mouth) and another victim/enabler to con or seduce. The narcissist will go lower and lower until one of four things occur:

The narcissist may still harass, try to control and/or triangulate you in cases one and two. This means you’ll need to create and enforce strong boundaries and deliver consequences for violating them. If you don’t share minor children, there’s no reason not to go full No Contact. If you share minor children, educate yourself on parallel parenting and practice Low Contact.

In case three, any of these occurrences may stop the narcissist for a time or, if you’re lucky, permanently. Even so, once the narcissist is released or no longer accountable to the court or law enforcement, they’ll be back to their old tricks. In case four, I have a highly developed sense of gallows humor and hope you can appreciate it.

It’s highly unlikely any of these events, that would cause most people to re-evaluate their life choices, will cause the narcissist to have an epiphany and change their ways. Narcissists rarely graciously accept being told no. They’re not phased by family court judges who wag their finger and say, “Now stop that, Ms./Mr. Crazypants!” Oftentimes, restraining orders aren’t a deterrent. The narcissist usually keeps pushing and/or becomes sneakier in their predations. But they don’t stop. Even when they initially experience some consequences.

Rock bottom for a narcissist is when they finally hit a Wall of Accountability that they can’t bully, tantrum, cry, lie or buy their way out of. Rock bottom is when the mask of the narcissist’s False Self is ripped away and their true defenseless, impotent, self-loathing inner child is revealed. Narcissists are truly pitiful in these moments to the point of despair, depression and possibly genuine suicidal ideation (not the emotionally manipulative empty suicidal threats they blackmail their partners and families with). You may even feel sorry for them and believe they might actually be able to learn and mature into a healthier individual.

Not gonna happen. A Shrink4Men Facebook page follower sums it up well:

I’ve seen that depression when they collapse and hit rock bottom. It’s the only time you’ll see their true self, the pitiful child inside. It’s tempting to assume the nightmare is finally over and try to rescue them. Don’t. As soon as they catch their breath, the mask goes back on and they will work even harder to destroy you, because now you know their secret.”

At this time, the narcissist feels sorrier than usual for themselves. They feel powerless, thwarted, vulnerable and sometimes even admit how horribly they’ve treated you. That’s typically the biggest shocker for the spouses or family members of narcissists. When they’re so low that they acknowledge how shitty they’ve been to you. For a moment, you feel a flicker of hope. Maybe things can get better.

Whomp! Whomp! Whomp! Sooner than you can flick on the gaslight, the narcissist’s primitive defense mechanisms are fully reengaged. Then, as previously noted, the narcissist treats you worse than before because you saw their true self — that underdeveloped, sad, bitter, flaccid, self-pitying child. And for that, you must be destroyed.

I observed this in my relationship with a narcissistic ex. We were at the dog park the day after I discovered he’d been cheating on me with a mullet-haired, buck toothed, bisexual former child actress (not making this up, I swear!) The ex was uncharacteristically contrite and riddled with shame for approximately four to five days. During this fleeting portal to an alternate dimension, unable to make eye contact he asked, “How can you still want to be with me? Aren’t you disgusted by me? I disgust myself.” Short answer: Codependency + Betrayal Bond + C-PTSD.

One of the most effed up things about the whole effed up relationship with a narcissist, is comforting your abuser when they hit (what you believe) is their rock bottom. So many of my clients do this. I did it. We think we’re being compassionate and want to believe they’ll change. In reality, it’s just another violation and an especially sadistic one at that. Hard won lesson learned about crocodile tears, self-respect and self-care.

Predictably, the ex’s shame and remorse were short-lived. The abuse ratcheted up to extreme new levels, until he finally sucker punched me. Why? For telling my friends and family what was going on (i.e., exposure), so I could get some much needed support. Getting sucker punched by someone I loved and trusted was my rock bottom. Three days later, I packed up and moved a thousand miles away while he was out of state on a business trip.

If you’re still in one of these toxic relationships, what’s your rock bottom? If you’re waiting for the narcissist to hit her or his rock bottom and miraculously change, please stop deluding yourself. Instead, determine what is the absolute worst thing your narcissist would have to do in order for you to end the relationship. Then, think of all the horrible things she or he has already done, and ask yourself why you’re waiting around for that final degradation? 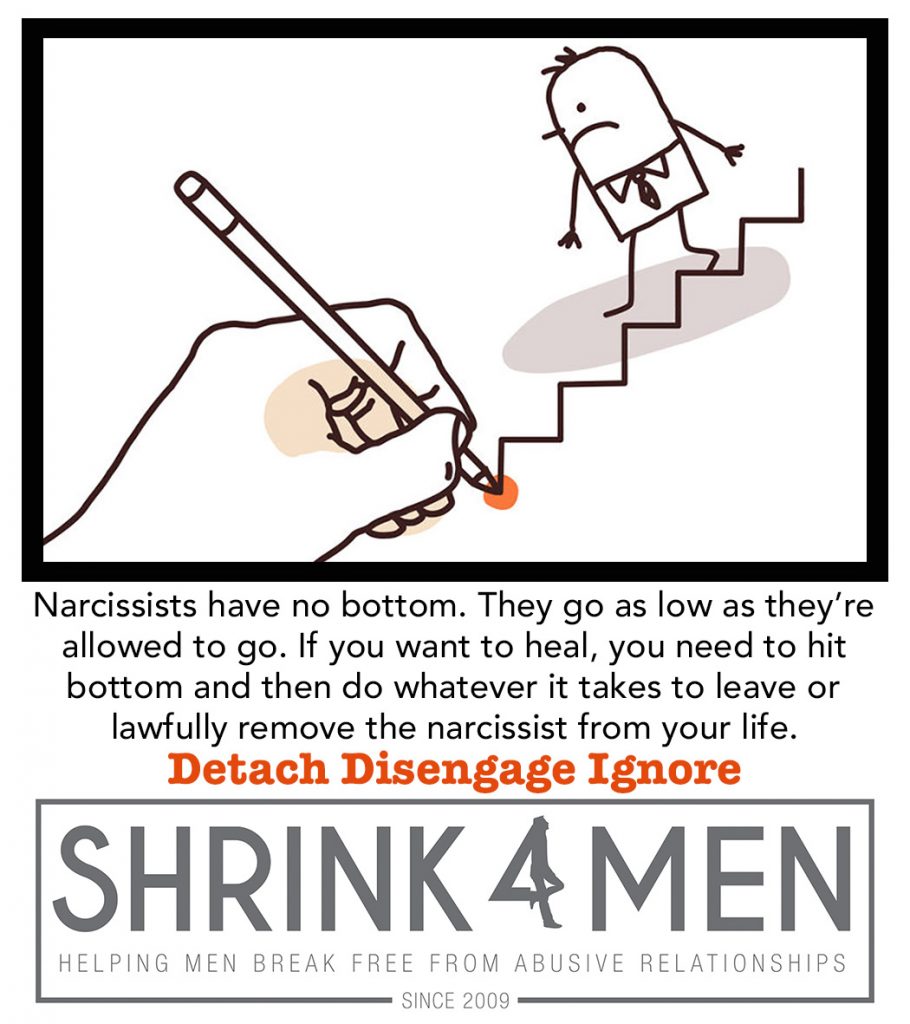