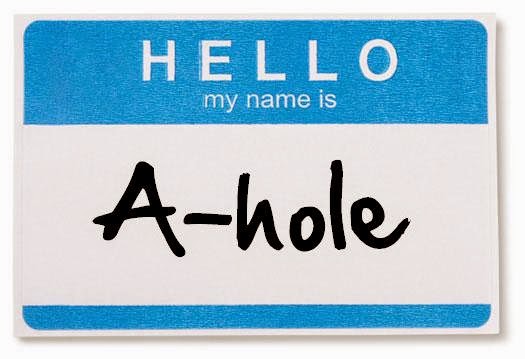 Yes, I’m a Clinical Psychologist and, yes, I’m encouraging you to be “the asshole” when co-parenting with a borderline or narcissist ex. Shocking, right? Contrary to most other advice? That depends. I’m anti-enabling and anti-apologist when it comes to dealing with borderlines, narcissists and other high-conflict, characterologically disturbed personalities.

Part one of this series examines why co-parenting with a narcissist means being “the asshole.”  Namely, to minimize the conflict and drama and achieve some degree of peace for yourself and the children. Part two explains how to be the asshole. Specifically, I detail new attitudes and behaviors you can adopt to make life easier for yourself and your children. Part 3, Co-Parenting with a Borderline concludes the discussion.

What does being “the asshole” mean in this context?

Before resuming the how-to’s, let’s clarify a few things. First, being “the asshole” when co-parenting with a borderline or narcissist doesn’t mean being a controlling, obnoxious jerk. Rather, being the asshole means no longer caring what the narcissist or borderline thinks about you. It also means both ignoring and not being emotionally affected by their attempts to control you post-divorce. Second, I while I use the terms borderline and narcissist interchangeably sometimes, I am, of course, aware that they’re different diagnoses.

In practice, does it matter if you’re bitten by a rattlesnake or an asp? Both are venomous serpents capable of killing you. They can both be highly manipulative, emotionally and psychologically immature, destructive, empathy-challenged, pathologically dishonest and hypocritical personalities. If you want to argue about how the pattern of their scales differ, who am I to say how you choose to spend your time? However, I won’t be joining you in it. I’m not sticking my hand into a reptile tank containing either variety.

Okay, back to how to be the asshole when co-parenting with a borderline or narcissist:

Why can’t she just . . . !? What’s so hard about . . . ?! Why does he have to be so . . . !? Who acts like that?! Your ex does, that’s who! At the risk of sounding like an asshole, that’s the reality, so deal with it. Narcissists and borderlines don’t have miraculous epiphanies and change for the better. Quite the opposite, in fact.

On occasion, they’ll uncharacteristically behave themselves. Should this occur, be wary. Well, appreciate the temporary respite, but keep your guard and boundaries up. Typically, the abnormal normal behavior is an indicator something shady and/or malicious is afoot.

For example, they’re feeling magnanimous and gloating about something shitty they’ve recently done, but you don’t know about yet. Or, they play act normal while love bombing interest/target, for the court or someone they want to seduce, recruit or con. Another example, they’re buttering you up because they’re about to ask you a favor. More like lubing you up as most favors done for narcissists and borderlines often return to bite one in the ass.

Periodically, they focus their hate, hostility and aggression onto new and/or other targets. But, they’ll eventually circle back to you. So, anticipate it and be prepared. If there’s a selfish choice to make it, they’ll make it. In other words, hope for the best and plan for the worst when co-parenting with a borderline or narcissist.

This is possibly the most important thing you can do as you learn how to be the asshole when co-parenting with a borderline or narcissist. The following are common areas clients struggle with regarding personal accountability:

Stay in control of your emotions. Of course, you’ll feel angry, frustrated, annoyed and exasperated by the narcissist’s or borderline’s antics. But, don’t let them see that. They feed off of the negative emotions of others.

Practice emotional detachment. Or, in the common parlance, develop the art of not giving a fudge. While there’s nothing you can do to change Crazy, you can modify how you think and emotionally respond to them. Does reacting with anger or annoyance change anything? No, it doesn’t. All it does is allow Crazy to continue to live in your head rent-free. And, the eviction notice is long overdue.

Strengthen your emotional support system. Including, friends, family and professional support. Don’t hide the narcissist or borderline’s abuse from your support system anymore. Don’t broadcast it on social media. Do it offline.

Consistently maintain and enforce your boundaries (including the custody order). Playing loosey goosey with boundaries and custody agreements reward these individuals for persisting in their dysfunctional behavior.

Practice regular and meticulous fact- and evidence-based documentation. Or, as I like to say, an ounce of prevention now saves a boatload in legal expenses later.

There are many other ways to hold oneself accountable. These are the most important ones, in my experience.

3. Manage your stress by practicing self-care.

Yes, self-care matters! And, more than you probably think. Especially when you’re co-parenting with a borderline or narcissist. Many clients equate self-care exclusively with physical exercise. There’s so much more to it. Let’s start with the basics.

If you grew up in a dysfunctional family with emotionally or physically absent parents, and/or were a parentified child, it’s likely you didn’t receive consistent, good enough care. Self-worth is rooted in how well our parents take care of us. A parent’s care ideally instills a sense of “you matter” in a child that carries over into practicing self-care as developmentally appropriate starting in childhood through adolescence and into adulthood.

Again, think basics. What do good enough parents do for and then teach their kids to do for themselves? Wash your face. Comb your hair. Get plenty of sleep. Eat healthfully. Get enough exercise and fresh air. Hang out with good people. To quote Carly Simon, “Grandma used to nag at me to straighten up my spine, to act respectful and read good books, to take care of what was mine.” Do that, and then do some more of that.

Nurture and care for your body, mind, spirit and psyche. For example:

These suggestions aren’t finite. They’re just some basics to get you started.

Many clients continue to walk on eggshells after divorce because they fear the narcissistic or borderline ex will:

I hate to break it to you. Crazy is already taking it out on the kids. That doesn’t stop until or unless they lose custody of the kids. Or, until the kids go No Contact with the narcissistic or borderline parent once they become adults. Furthermore, whether you realize it or not, parental alienation usually begins long before divorce. That occurred whenever they abused and disrespected you to the children, undermining your efforts to parent the kids.

Also, have you noticed that the narcissistic or borderline ex engages in behaviors they know bother you the most? Again, kowtowing to Crazy after divorce won’t make them nicer to you. In fact, it does the opposite. It teaches them they are free to bully you to their hearts content.

If you decide to embrace your inner asshole and exercise healthy boundaries, you’ll be threatened with court. Crazy may never actually take you back to court, but she or he will likely threaten it. When this happens, it’s a good time to practice the previously discussed reality testing addressed in Part 2.

When no matter what you do is wrong, selfish, not good enough or evidence of you being a “narcissistic abuser,” always do what’s good for you and/or the children. First, you can’t win a no-win situation. If you persist in trying over a long enough period of time, you will create a sense of learned helplessness that can result in depression and despair.

Before redefining winning, let’s define what winning is not. When co-parenting with a borderline or narcissist, winning doesn’t mean getting Crazy to finally see the light and stop being Crazy. Winning doesn’t mean achieving decisive victories in Family Court. Although, don’t get me wrong, it’d be great if you did! Winning doesn’t necessarily mean able to heal and repair your relationships with alienated kids. And, lastly, winning doesn’t mean convincing family, friends and the courts, etc., that Crazy is indeed crazy.

What winning means to Crazy.

For Crazy, winning means that she or he has the ability to hurt you, a new partner (if you have one), your family, the kids, your friends or anyone Crazy sees as “on your side.” In other words, anyone who can see through the borderline’s, narcissist’s, psychopath’s or histrionic’s bullshit. Winning, to Crazy, is the ability to intrude upon and disrupt your life and relationships.

It means having the ability to cause you social, reputational, career, financial and legal harm. Winning also means Crazy gets to destroy or forcibly take away people and things that are important to you. Bottom line, inflicting pain to you and your loved ones brings Crazy pleasure. That’s what winning means to Crazy.

To clarify, there is no winning in the traditional sense against this kind of gleeful sadism. There’s no compromise for it either. Got it?

What redefining winning means to you.

Henceforth, winning means removing Crazy from your life to the greatest degree possible. That is, until you’re no longer legally required to co-parent. After which, there is No Contact. Winning also means removing Crazy’s enablers, apologists and other flying monkeys. It means nurturing and cherishing all that’s good in your life, walking away from pointless conflict and drama and choosing health and well-being. It means reducing the borderline or narcissist ex’s and their minions’ ability to screw with you to the tiniest, infinitesimal speck of insignificance in your life.

Winning is almost entirely under your control. This is great news. You can choose what you allow to upset you, and ignore the rest. So, choose the proverbial hills to die on wisely and then make it count. If you can develop and implement these attitudes and practices, you can significantly reduce the ex’s capacity wreak havoc in your life.

Once you understand that Crazy’s texts and other communications are intentionally inflammatory and meant to upset you, it helps to de-fang Crazy’s effect on you. And, what kind of power is that really? The power to piss you off? If Crazy loses that, then what does she or he have? NOTHING.

6. Embrace being the asshole!

Ultimately, successfully co-parenting with a borderline or narcissist ex comes down to your willingness to be “the asshole.” That is, being the asshole in the ways I outline in this three-part series of articles. For many of you, this will seem both revolutionary and antithetical to your childhood teachings to “always turn the other cheek” or “being nice.”

But how’s that worked for you thus far? Crazy will continue slapping you until your cheek-less. As for being nice? Keep doing that and Crazy’s proctologist will find chunks of you in her stool. Gross analogy, but accurate!

Here’s a little self-pep talk for you to try:

Now, it’s time to embrace being the asshole. And, to finally reclaim your life because who the hell cares what some asshole thinks about you!