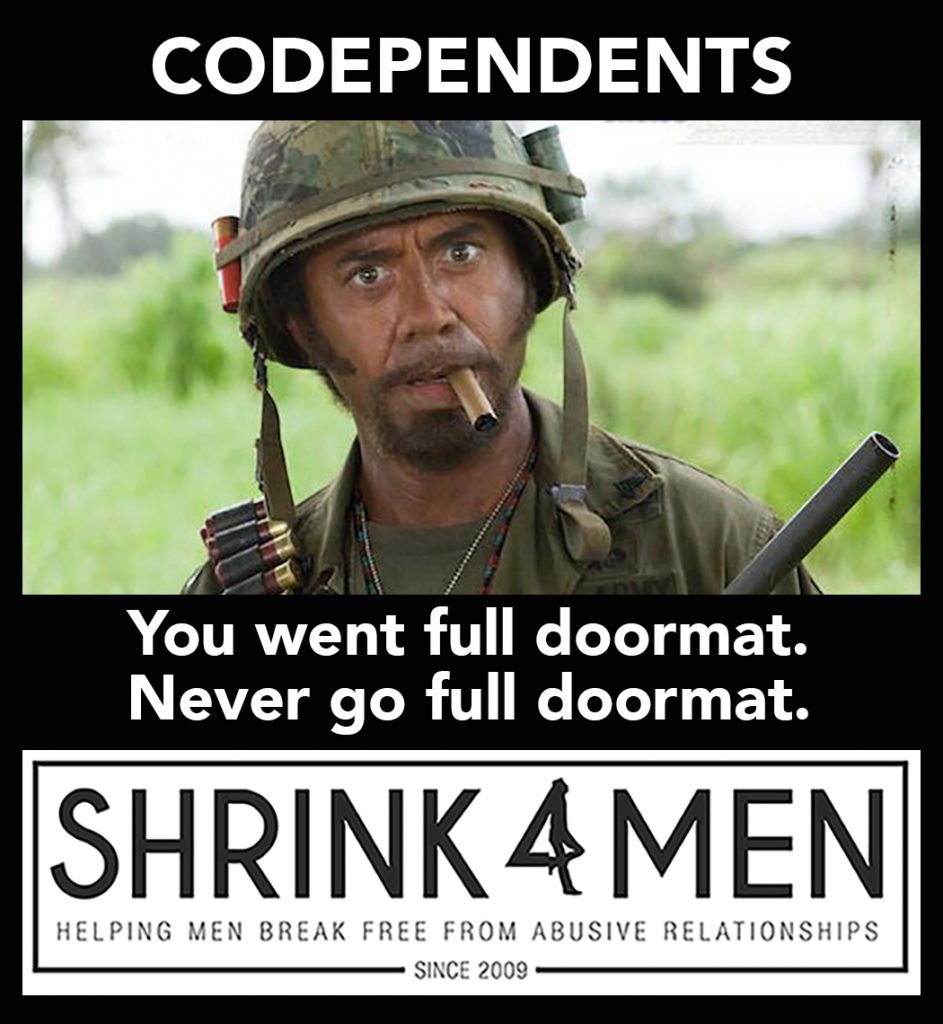 Virtue is its own reward.

That all depends upon how one defines “nice” and one’s motivation for performing good deeds. “Being nice” in response to someone who consistently mistreats, exploits and abuses you is you putting yourself in last place. Doing good deeds hoping a partner or ex will appreciate and reciprocate after years of neither appreciating nor reciprocating can feel like you’re being punished.

If you’re being honest with yourself, you understand that this is a form of self-inflicted punishment. After all, assuming the role of relationship doormat is a voluntary position. You can resign at anytime.

Why do you continue to “be nice” to someone who consistently doesn’t meet your needs and refuses to acknowledge or dismisses your feelings? What do you expect in return for “being nice?” Have you explicitly stated this? In other words, is it an overt contract or a covert contract? A covert contract is an unspoken expectation or rule in a relationship that only you know about and, when the expectation is unmet, results in resentment and anger.

What do you expect in return for doing good deeds? Recognition? Gratitude? Reciprocity? Loyalty? Indebtedness? If virtue is its own reward then the expectation of appreciation, admiration or reciprocity for being virtuous isn’t virtuous. At best, it’s an unconscious manipulation; at worst, it’s a deliberate manipulation.

How can you tell the difference? Genuine generosity of spirit comes with no strings attached. Not the expectation of being liked for doing the good deed or even a thank you. It just makes you feel good to do a kindness.

If it’s a codependent manipulation, you’ll likely feel resentful, slighted, angry or a sense of “not fair!” if the desired fruits of your virtue don’t materialize. Once you realize your relationship is unbalanced in the give and take department, say something to your partner. If they dismiss, deny, make empty promises and/or respond by saying, “Yeah, what’s your problem?” and you continue to give hoping things will get better, that’s on you. You’re volunteering for more abuse and exploitation.

This can be a tough pill to swallow for many clients. If you can relate to this article, I’m in no way saying you deserve to be taken advantage of and mistreated. However, once you recognize this is what’s happening in your relationship, it’s your responsibility to stop participating in your own abuse. You can set and enforce boundaries, and hope your partner will change and grow with you. Or, you end the relationship if they can’t or won’t. Once this kind of dynamic’s been established in a relationship — even if your partner isn’t personality disordered — it’s incredibly difficult to change.

“Being nice,” trying to rescue, fix, save or chronic care-taking in order to create a dependency in your partner is classic codependency. Codependent individuals confuse being needed with being loved. The underlying belief is, “If you need me you’ll be nice to me. Maybe even love me.” Codependents are “nice” and take care of their frequently disordered/addicted/just plain selfish, self-absorbed and immature spouses, family or friends hoping that some day it’ll be their turn to receive similar care and devotion. This rarely happens.

Typically, the codependent continues to give, care-take and tolerate abuse and exploitation while growing increasingly resentful, demoralized and depleted of energy, money and their physical/emotional health until they become an empty husk. At this point, either the codependent’s self-preservation instincts are activated and they end the relationship, or the abusive narcissistic, borderline or psychopathic partner discards them for new more robust supply.

These behaviors and attitudes are frequently learned in childhood. It’s the result of being raised by parent(s) who were abusive, neglectful, emotionally unstable, alcoholic/addicts, emotionally unavailable, personality disordered and other forms of toxic dysfunction. As children, many adult codependents only received affection, attention or avoided abuse when they took care of their parents (i.e., parentification — a role reversal between parent and child) and/or didn’t bother their parents with their needs. The latter is why so many codependents have difficulty asking for help and support when they need it. They learned the painful lesson in childhood that they were basically on their own and help would not be forthcoming. Or worse, that they’d be punished, ridiculed and abused for seeking help, support and attention from their parent(s).

“Being nice” vs. being kind.

Mr. Facebook Follower: Choose someone nice and don’t be an immature victim. It’s not that hard.

Ms. Facebook Follower: “Nice” is an artificial construct. A pretty mask. Look for kindness, responsible behavior, prudent management of time and money, compatible life goals, and similar spiritual values. Look for a woman who can make you laugh, who is just as happy to grab a picnic basket and have a quiet lunch in the park as to dine in a fancy restaurant. One who is as comfortable in jeans as she is dressed up and doesn’t fret if you catch her without makeup. One who is as courteous to the waitress as she is to the CEO of the company. Who speaks the truth without tearing down. And approaches issues as an adult, not a whiny child. One who isn’t dating you as a Pygmalion project.

“Being nice”  doesn’t necessarily equate to being a kind or good person. Wasn’t your abusive narcissistic or borderline ex “nice” to you when they love bombed you in the early days of the relationship? Would you describe your ex as a kind person or someone who can “be nice” when it’s in her or his interest to be?

When I make the conscious decision to “be nice,” I’m making the conscious effort to bite my tongue and not say what I’m really thinking. There are different reasons for this:

1. The person I’d like to lambaste doesn’t mean anything to me and/or I’ll have little to no future interaction with them, so it isn’t worth the effort required to Break Bitch Glass in Case of Emergency. (Seriously, it requires a tremendous amount of energy. Perhaps this is why many clients’ abusive, NPD/BPD spouses/exes sleep for 10+ hours a day?)

2. I’ve identified the individual as personality disordered, and don’t want to become the target of obsessive hatred or retaliation — especially if they’re of no significance to my personal or professional well-being. If they are of significance, that requires a Get Them Out of My Life Safely Plan.

3. In social or work settings, I’m passive-aggressively “nice” in order to highlight what a jerk the other person is being. Not being naturally politically astute, this was a tough one for me to master in graduate school and work settings. *Note to anyone in a high-conflict divorce/custody case: Responding with hostility and incivility to the ex may cause judges, custody evaluators, etc., to think you’re the source of the conflict — especially if you’re a man and the narcissistic or borderline ex is a woman.

4. I’m starving the beast. Or, as I like to say, feed a fever, starve a psycho. In other words, I’m refusing to give the wingnut who’s trying to push my buttons any satisfaction.

Notice none of my reasons for “being nice” include manipulating someone into “being nice” to me or attempting to establish intimacy (or any kind of relationship). “Being nice” is a transaction. In my examples, “being nice” has nothing to do with being kind. It’s strategic and self-protective behavior.

Kindness is neither strategic nor self-protective. A person is either fundamentally kind, or they’re not. It’s like having integrity. It either exists or it doesn’t. Of course, kind people have unkind moments. Kind people get depressed, angry, stressed, impatient, etc., and then say or do something hurtful to a loved one or stranger. Then a kind person feels regret, apologizes and does what’s necessary to mend the hurt. The same goes for integrity.

Kindness emanates from seeing the humanity in others, empathy, emotional attunement, self-care and self-respect. Kind people can also be nice people. Perhaps for similar reasons to my personal examples. Doormats are usually “nice” because they’re afraid. Afraid they won’t be liked. Afraid their girlfriend/boyfriend/spouse will leave them if they share their true thoughts and feelings. Afraid people will be angry with them if they say no.

A former client explicitly said his goal in a relationship was to be the best doormat he could be. He believed that’s how he’d be able to hold onto a now ex-girlfriend who barely made the effort to hide her multiple infidelities from him. I believe my exact response to him at the time was, “WTF, dude? No. Just no.” He claimed he felt good about “being nice” in response to her repeated betrayals. His depression, anger and resentment said otherwise. He claimed he hoped his ongoing “niceness” would lead to her feeling guilty and, thus, treat him better. This is how codependents manipulate.

His doormat-ing began in childhood with a physically violent, alcoholic step-father and a mother who was so desperate for a husband she didn’t protect her son. It was a survival/coping mechanism that became his adult relationship identity. I’m happy to report that, at the time of termination, he was in a healthy relationship with a kind woman. He had to do the work of practicing self-care and self-respect first though.

Being a nice doormat is the opposite of self-care, self-love and self-respect. You can be a kind person without being a doormat. Yes, kind people are also helpful people. I know, I know — you were just trying to help your narcissistic or borderline ex. At least, this is what most of my clients tell themselves (until they begin working with me!)

First, do you know the difference between helping and enabling?

Kind people help others in need. Meaning you offer support or other resources to assist an individual in being able to care for themselves. “Nice” people enable others who may or may not be in need. You enable someone when you do the work for them that they’re capable of doing themselves. You also enable someone when you protect them from experiencing the natural consequences of their irresponsible, unhealthy or criminal behavior. Enabling is often part of covert contracts, codependent relationships and abusive relationships. And there’s nothing kind about it.

Second, precisely what are you trying to help your selfish, self-absorbed, emotionally unstable, immature girlfriend, boyfriend, spouse or ex do? Become a better person? Stop abusing and taking advantage of you? You won’t accomplish that by “being nice.” When has a bully — child or adult — ever stopped being a bully because their victim was “nice” to them after being bullied? All that does is result in more bullying.

Oftentimes, the kindest thing we can do for someone who is behaving self-destructively is to allow them to suffer the consequences of their choices. That’s the only way some people learn and grow. Then there are people who don’t mature and evolve no matter how many natural consequences they experience. These individuals are usually personality disordered.

If you’re a kind person, my advice to you is to stop “being nice” to people who deliberately and repeatedly hurt, deceive, exploit and betray you. You don’t have to sink to their level, but be kind to yourself. Get away and stay away from them. If that’s impossible due to shared minor children, limit contact to the best of your ability. No one respects a doormat. Especially not bullies, the opportunistic and exploitative and the personality disordered. Rather, they see you as the perfect target.