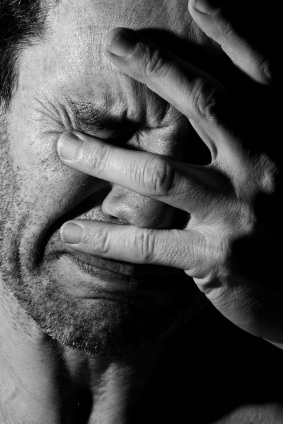 It’s still really difficult for me to admit that I was abused; that I’m an abused man.”

“My couples therapist told us men can’t be abused and that my wife is just emotional and I need to be more understanding and patient with her.”

“I just don’t how I went from being a happy guy, with friends, family and a great job to who I am now.”

“My wife thinks I’m being abusive and controlling when I tell her her behavior is hurtful.”

These statements are frequent refrains both in my practice and on Shrink4Men. Gentlemen, it’s time to take the blinders off and wake up. Men are just as likely to be the targets of abuse as women. Women are just as capable of being abusive as men. Abuse is abuse and it’s not different when she does it.

Wait a minute, I take that back.

It is different when she does it because she’s more likely to get away with it, for the time being, that is.

Women-centric domestic violence groups and Dr Phil would like our society to believe that only men can abuse and only women can be victims. They are lying to you. In fact, individuals who perpetuate this lie are abusers themselves. Why? Because not only are they denying help to millions of men and their children who are suffering everyday, they’re denying the existence of their suffering.

People who deny that men can be abuse victims are also unforgivable hypocrites.

Domestic violence centers and spokespersons bang the drum ad nauseam about “ending the silence on domestic violence” in regards to female victims, but tell male victims of abuse that they’re not victims and to shut up and go away. The “Men Bad-Women Good; Men Abusers-Women-Victims” mentality is an example of a primitive psychological defensive mechanism called splitting. [*Splitting is also a very common behavior engaged in by many individuals with Borderline Personality Disorder.]

Men in Denial about Being Abuse Victims

Many men recognize that their wife’s/girlfriend’s behavior is cruel, erratic, crazy, demanding, controlling, pathologically possessive, manipulative, passive-aggressive, cold and hostile. They can articulate that their female intimate partners call them names, withhold sex and affection to punish and/or use it as a transaction, lie, cheat, steal, make disparaging remarks about them to others–including their own children, make threats and throw objects, slap, kick, scratch, punch, pull hair, etc., but still won’t acknowledge that their wife’s or girlfriend’s behavior is abuse.

If you’re a man who is having trouble coming to grips with the fact that your wife’s or girlfriend’s behavior is indeed abusive, consider the following questions:

1. Helpless and hopeless. If her behavior makes you feel helpless, hopeless, powerless, crazy, confused, overwhelmed, scared, anxious, stressed, fatigued, and physically ill, you may be experiencing common trauma symptoms associated with abuse. Admitting the problem is often the first and most important step you can take to solving the problem.

However, don’t expect your wife or girlfriend to share your view of the problem. If you tell her that her behavior toward you is abusive, she’ll most likely turn it around on you (DARVO—Deny, attack and reverse victim order) and accuse you of being the abuser.

That’s what abusers do. They blame their victims. It’s what the stereotypical alcoholic wife beater does and it’s what abusive high-conflict and/or abusive personality-disordered women do.

2. Role reversal. Imagine if you and your wife or girlfriend could switch genders. How would you and, let’s say, oh, I don’t know. . . the support staff at a woman’s domestic violence shelter view her behavior toward you if she were a man and you were a woman? If the answer is, “He’s an abusive creep. You need to protect yourself and your children, create a safety plan and get out,” then your wife or girlfriend is an abuser and you’re an abused man in the context of your relationship.

Enough with the double standards already.

3. Perp walk. If your wife or girlfriend engages in physical violence toward you, it’s abuse, it’s domestic violence and it’s a crime. Period.

Men, I know it’s humiliating for many of you to admit you’re in an abusive relationship and that you’re an abused man in the context of your intimate relationship, but there shouldn’t be any shame in doing so. Your abusive wife/girlfriend is the one who ought to be ashamed. It takes an incredible amount of strength and courage to admit to this problem and seek help. If you can endure the behavior of an abusive woman, you have more strength than you know. You just need to use that strength to get help and get out. Furthermore, the powers that be and DV groups want to maintain the shame men feel about being abused. It makes it less likely that you’ll complain and ask for help. In order for this matter to be taken seriously, you have to redirect the shame at the people who are behaving badly and make some noise.

If you can’t admit that you’re being abused to yourself and take it seriously, then society and our legal system will probably never do so. This means the current extremely biased and inequitable divorce and custody laws and practices will stay in place. If we don’t change the current divorce and custody laws that favor women, then you will most likely be punished by the courts for trying to escape your abusive marriage. It’s not right and it needs to stop. That won’t happen until we raise public awareness.

Once you stop the abuse and take your life back, you’re no longer a victim.