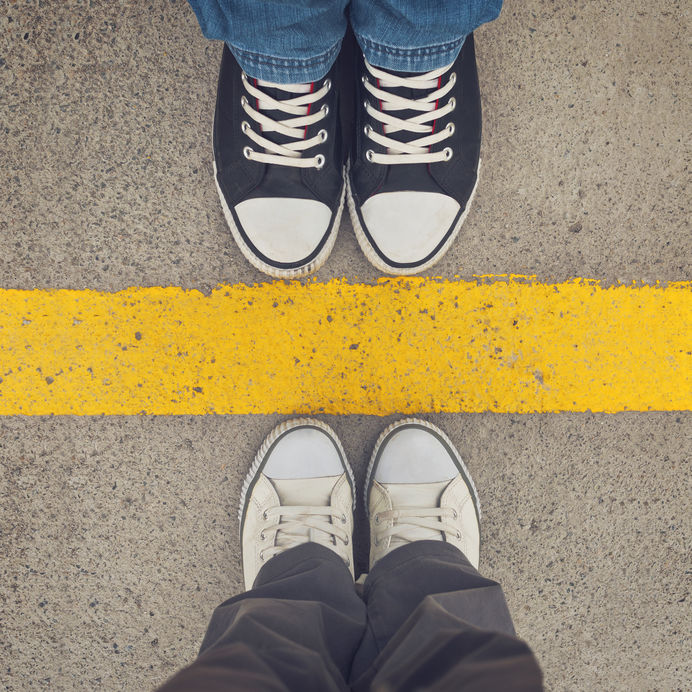 Many clients become hyper-focused on spotting personality disorder Red Flags after being in a relationship with an abusive narcissist, borderline or psychopath. They’re reluctant to date again until they feel certain they’ll be able to detect all the warning signs. This is understandable. After being burned that badly, of course you don’t want to go through that kind of soul sucking, gut wrenching, heart breaking, mindfuckery ever again.

After getting violently ill from bad shellfish, you want to be certain the next plate of oysters isn’t toxic. While being able to identify bullies, selfish jerks, the emotionally immature, emotional vampires, the pathologically entitled — whatever you call these individuals — is important, it’s only half the equation. The other half of the equation is YOU.

Even if you read all the Red Flag blogs or watch all the Red Flag videos on the Internet, you can still miss something. If you’re in what I call the “dry drunk” stage of narcissistic or borderline abuse recovery (i.e., you’re not “using,” but are still attracted to “exciting” [sarcasm] emotionally unstable women and men), boundaries will keep you on the healthy path. Sometimes, high functioning narcissists and borderlines can keep their mask or False Self in place until after marriage or the birth of a child. If you lack self-respect, the foundation of boundaries, you’ll find yourself smack dab in the middle of Crazytown again.

Essentially, boundaries are about personal autonomy, self-respect, personal safety and well-being. Boundaries aren’t about controlling others. Boundaries tell others what you’ll accept and what you won’t tolerate. If a borderline boyfriend or narcissistic girlfriend, for example, find your boundaries intolerable, then they have a choice. They can respect your boundaries or they can go find a more pliable doormat.

Ideally, good enough parents teach us healthy boundaries when we’re children. Don’t hit your siblings. Knock first and wait for permission before entering. Ask before borrowing a sibling’s property. Stranger danger. Tell a safe adult about inappropriate touching. Allow children to dress, toilet and bathe themselves once they’re old enough. Kids can decide when they’ve had enough dinner. It’s okay to say no to a hug. Permit kids to express their likes and dislikes. Allow children to have age appropriate privacy.

Unfortunately, many of us were raised by parents who either didn’t have boundaries themselves or didn’t tolerate, to put it mildly, their kids having boundaries with them. What happened if you told your mother or father no? Was the mere thought telling your parents no terrifying? Were you made to feel selfish, mean or bad if you disagreed with or challenged your parents? If so, is it any wonder creating healthy boundaries as an adult is overwhelmingly difficult?

Conversely, perhaps mom and dad taught you to always turn the other cheek, keep the peace, be nice and get along with everyone. My mother frequently told me, “Don’t make waves” when I expressed anger about being bullied or treated unfairly. Basically, she used shame to discourage me from standing up for myself. My mother taught me not just to turn the other cheek to bullies, but to do their laundry and take them out for lunch afterward my treat. It wasn’t until my late 20s that I first began standing up for myself. It wasn’t easy and it’s still occasionally anxiety-provoking, but not nearly like it used to be.

Many women are taught as girls to be “nice” and “not make waves.” (*This was the case in my generation and previous generations. Presently, it seems like girls are encouraged to be obnoxious bullies and princesses.) In other words, having boundaries and holding people accountable is bad, mean or selfish. Some men are taught this as boys, too.

What’s more common, in my experience working with men, is for boys to be taught to stand up to male bullies and to always be nice to girls even if a girl is assaulting, bullying or exploiting them. The majority of my clients are able to stand up to aggressive male colleagues, neighbors, etc., but walk on eggshells around their physically diminutive wives and girlfriends. How many women feel empowered to slap a man (who’s not physically aggressive) without fear of retaliation or consequence of any kind? How many of these same women would have a man locked up if he even verbally threatened violence or simply told her no?

This is a big problem. The current cultural double standards and hypocrisy are corrosive to man-woman relationships. Not just in intimate relationships, but at school, the workplace, etc. All kids (girls and boys) should feel empowered to stand up to bullies, including female bullies. As a society, it’s time to accept that bullying and abuse isn’t a gender issue — gender studies be damned. Having one set of societal rules for girls and another for boys regarding bullying and gender, again, is a big problem.

If you had non-confrontational and/or codependent parents, they may have unintentionally conditioned you to be an accommodating doormat in the face of abusive personalities. Turn the other cheek and other childhood platitudes may work work well with decent people, but not so much with narcissists, borderlines and psychopaths. If you don’t have boundaries narcissists will cut through you like a hot titanium steel blade through Fontina.

Narcissists and other predators count on others being “nice” and “polite.” In other words, people who are reluctant to hold them accountable for fear of being “rude.” This is how narcissists often get away with being cruel, treacherous, manipulative and pathologically entitled. They looooooooove people who are “too nice.” Narcissists and borderlines see kindness not as a virtue, but as a weakness to exploit.

That doesn’t mean that you have to stop being kind, nice, generous, accepting and loving. Not at all. Do, however, become more discerning and stop being “nice” at your expense. In other words, respect and love yourself enough to create and enforce boundaries. Having boundaries doesn’t translate to being a jerk. You can still be nice to others without letting them take advantage of you and abuse you.

This is a difficult concept for many of the men (and women) I work with to internalize. I repeat, being nice doesn’t mean being a doormat. You can be a kind, generous, helpful person without being an easily exploited pushover. Okay, okay, I understand. You still want to have a complete index of Red Flags. Fine. Here’s a really important one to add to your catalog.

RED FLAG #1073: She or he shames you or tries to make you feel guilty for having healthy boundaries.

Having healthy boundaries doesn’t fix or change a narcissist or a borderline. If that’s what you believe you’re missing the point. If you’d had healthy boundaries when you first encountered the narcissist or the borderline, the relationship would likely have not developed or lasted long if it did. Boundaries and accountability are narcissist and borderline repellent. If you’re in a relationship with a disordered person and try to establish boundaries now, they probably won’t take kindly to it. Expect their abusive behavior to escalate and/or for them to accuse you of being abusive or trying to control them.