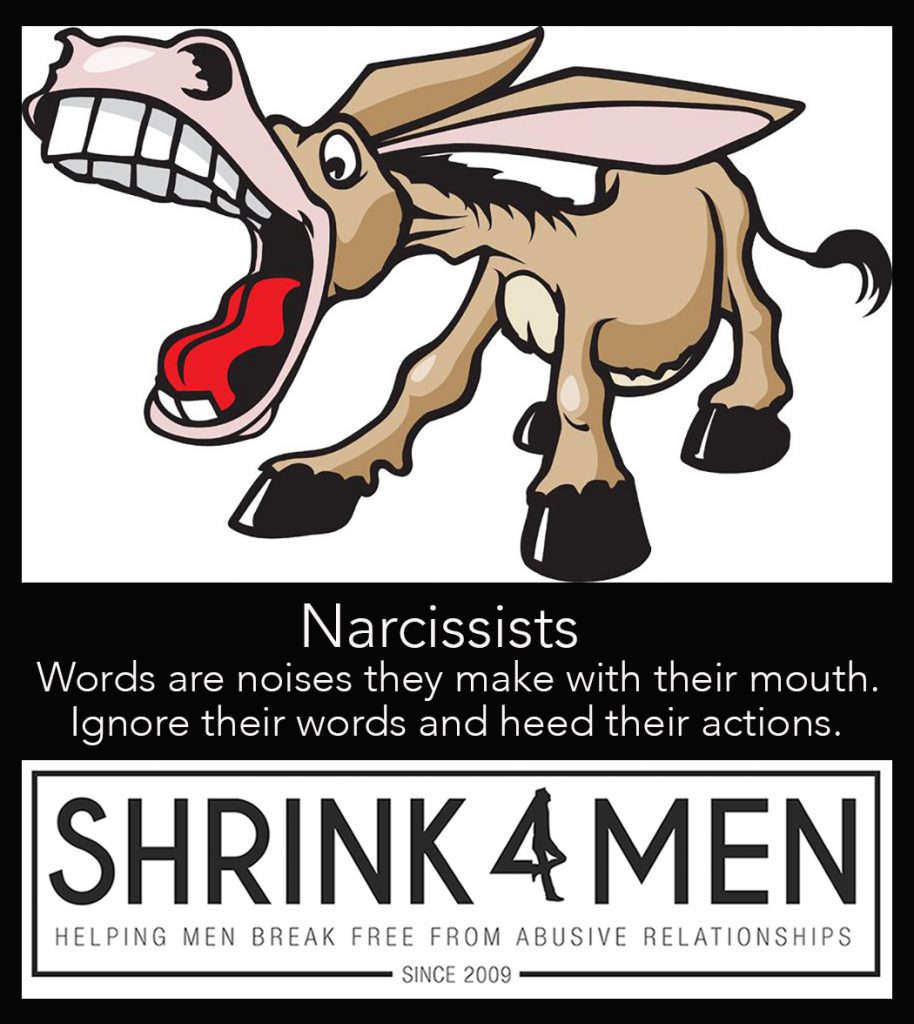 When their lips are moving! Har-dee-har-har!

A Shrink4Men forum member once shared an explanation about narcissists, psychopaths and borderlines’ propensity for dishonesty and the confusion it creates in their victims. It’s stayed with me ever since, one, because it’s funny and, two, because it’s true. When it comes to narcissists and other abusive personalities:

Words are just noises they make with their mouth.

On Monday she said she loved me and couldn’t imagine being with another man. On Thursday she was posting Facebook pictures of herself with her new soulmate, our neighbor from three doors down. Why? Who does that? Have you ever heard of something like that? How could she change so quickly?

He looked into my eyes and said he’d never met anyone as amazing as me. He said he’d call and that we’d go out over the weekend and then I never heard from him again. Why? Who does that? Have you ever heard of something like that? How could he change so quickly?

She said she wanted to have an amicable divorce. Now she’s lying about me having abused and raped her, won’t let me see the kids and is asking for maximum support while trying to get me fired. Why? Who does that? Have you ever heard of something like that? How could she change so quickly?

Sometimes these inveterate liars will contradict themselves within the same sentence, and then gaslight you when you try to hold them accountable. Some of them will deny things they’ve said minutes or seconds before. It’s maddening if you try to make sense of it.

It’s natural to try to make meaning of people or situations we don’t understand. No need to plumb the shallow depths of Lake Crazy on this one. You make sense of it by accepting the reality of the narcissist. They lie. They cheat. They screw people over. They say whatever is most expedient in the moment to get what they want in the moment, and that changes moment to moment to moment. They lie when the truth would serve them better. What’s more, they enjoy doing it. They experience a sense of duper’s delight.

Narcissists are pathological liars who are incapable of love, at least in an emotionally mature sense. If you a) don’t understand what love is and b) aren’t capable of loving anyone but yourself, words like, “I love you” or, “My love for you transcends all” have about as much value as a $3 bill. That’s painful to contemplate and accept, but once you do, you’re on the path to healing.

I wouldn’t say all of their words are meaningless. Narcissists, borderlines, psychopaths and other Unidentified Flying Crazies can and do tell the truth sometimes. But how do you know? That’s the thing. Even when pathological liars tell the truth, how do you know when to believe them or call bullshit? [*This is just one of a number of good reasons not to be in a relationship with an abusive, pathological liar, but I digress.]

So how do you know when a narcissist is more likely to be telling the truth?

When the narcissist is making threats. Or, as another forum member once said, “She kept none of her promises, but all of her threats.” Threatening others makes them feel powerful. The narcissist or psychopath may threaten something they don’t plan to do, just for the power rush of terrorizing you. However, they’re more likely to be honest about the harm they intend you than the moonlight and roses shtick.

If you’ve moved beyond the love bombing or idealization stage, the moonlight and roses shtick is exactly that — shtick. It’s usually a prelude to being manipulated or having your heart ripped out. Many abusers take a perverse pleasure in lulling you into an illusory sense of security before plunging the knife in your back, front or middle. Most of the time the truth lies in their actions, not their words. Sometimes the two match up, but when they don’t believe what they do, not what they say.

When the narcissist is being cruel. Many of my clients’ narcissistic or borderline partners or exes have said the most deplorably cruel things to them during and after the relationship. It’s wanton viciousness and, oftentimes, deliberate. After which the narcissist exonerates their cruelty by saying, “I’m just being honest” or “I’m just expressing my feelings.” Another variation of this is when they feign outrage and insult, “Are you going to hold something against me that I said when I was angry/drunk? Sheesh! What’s wrong with you?!”

Of course, many non-personality disordered people say things in the heat of the moment out of anger, hurt or fear, but then we feel remorse, hold ourselves accountable and make amends. Narcissists? Not so much. Their cruel words are their perception of you, not necessarily an accurate reflection of you. Since they know your sore spots and vulnerabilities, they typically mix a few grains of truth in with their cruel barbs and rest is exaggeration, distortion and projection.

When the narcissist is bragging about hurting you or others. Narcissists like to boast and gloat about how they plan to hurt and best you and others (i.e., do something shady, underhanded or backstabby). They also like to boast and gloat after they’ve hurt or bested you and others, or what I call the Narcissist Victory Lap™. This is different from making threats. That’s about intimidation and inducing fear. This is like the serial killer who reveals themselves to the police because they want the world to know how clever they are.

Seriously, these a-holes really do feel a sense of pride about hurting, cheating and duping others. Not shame, pride. Do you really believe someone who’s proud of hurting you and others is fixable? They’re not.

Why do they lie? Why do they say things they don’t mean or mean in the moment? F-cked up people do f-cked up things. If you’d like higher level psychological theories to explain this kind of behavior, they’re out there. But when you break it down to it’s most basic explanation, it’s because f-cked up people do f-cked up things. If you’re a Game of Thrones fan, you’ll recall the scene when Cersei tortures Septa in which Cersei explains why she’s committed her many atrocities — because it feels good.

So what’s the more reasonable choice? Continuing to try to figure out why the narcissist is a narcissist, or figuring out how to end the relationship with the narcissist?