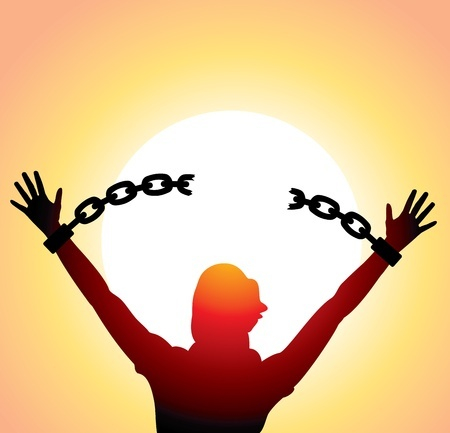 It is day 2 of Domestic Violence Awareness Month. Today’s In His Own Words is an emancipation proclamation of sorts. JC’s experiences are an illustration of how some men can be blind to the abuse they suffer.

If a man had chucked a coffee mug at a woman’s head, there would be no doubt such behavior is abusive. Because our culture does not recognize female perpetrated abuse, men like JC discount the obvious and instead seek to find ways to better tolerate the abusive behaviors of their girlfriends and wives.

JC’s story is also a good example of the frog in a pot of soon to be boiling water phenomenon. Intimate partner violence oftentimes emerges gradually over time. Initially, the abuse is infrequent and is attributed to the abusive woman having a bad day or some other plausible excuse.

Before too long, the infrequent abusive episodes become all too frequent. However, because it happens incrementally over a period of months or years, the target of abuse either becomes accustomed to it (i.e., it seems normal) and/or develops the habit of excusing, minimizing or rationalizing the abuse.

I’m a 40-year old man with one step-daughter and three biological children going through the process of divorce with my partner of 13 years. What I find strange though, is that instead of feeling grief for a lost marriage and despair at the loss of known security for my children, I feel relieved that the ride is ending. Yes, I’m gutted that the kids have to adapt to a change into the unknown for something that they had no control over, but I am eased by the knowledge that I can now concentrate on being their father without the shackles of guilt that have held me back.

And that I can live without the complaints that shamed me into believing that I am, somehow, less than valid.

And that I can live without the exaggerations, misrepresentations and downright lies that were used to “prove” that I was wrong about whatever the current issue was.

And that I can live without having to explain why I wanted a single £10 note to buy a new t-shirt when there were bills to pay.

And that I can live without being told that I had to “earn more” if I wanted anything as my wage that is on average £80 per week MORE than she brings in is not enough.

And that I can live without being told that there is no money available for what I want after she spends £50 on her hair, £80 on clothes and £30 on makeup.

And that I can live without being told that we are broke a week before the payment is due for the kids’ school trip, so I borrow the funds off my parents only to find later that she’s hidden £220 at the back of her drawer and lied about our situation.

And that I can live without the shame and worthlessness that envelops me when she has an affair, which, obviously, is my fault.

And that I can live without the threats of suicide, paracetamol overdoses, psychiatric nurses, stints in mental hospitals when I walk out because of her behaviour that is, again, my fault.

And that I can live without that crushing guilt and anxiety that creeps in when, with masterful manipulation, I’m made to feel that only I can make her better and “this time” it will work out okay.

And that I can live without the stress of trying to keep all this from the kids only for her to tell them that mammy had been in hospital because dad “walked out.”

And that I can live without the embarrassment of her projecting an image of her being a hard worker and dedicated mother to anyone who will listen, while naming me as a lazy, distant piece of crap who should be lucky and thankful that I have someone like her. After all, “who’s going to want you?” was her view of me.

At first I never saw it as abuse. I never understood it as an abusive relationship. And the reason for this is fairly simple.

I didn’t believe that men could be abused.

But men. How do you abuse a man?

Okay, I had to admit to myself that I’d had some close encounters in the past. After all an ex-girlfriend had once thrown a television remote at the back of my head so hard that it shattered into pieces leaving two nasty cuts spilling blood down the back of my neck. The dizziness and sickness that followed lasted for a couple of hours, but my ex said that it was my fault for complaining I didn’t like the soaps she watched and insisted we watch something else.

She was so, so sorry for what happened and it was best I didn’t waste any time going to the hospital because it would clear up by itself, and she knew what she was talking about as she was a nurse!

But that wasn’t abuse was it? That was just a disagreement.

The same girlfriend wanted an expensive engagement ring with diamonds and fancy markings and such, even though I politely let her know that marriage was a long, long way off and that I wouldn’t pay those prices for a ring when, as far as I’m concerned, love and commitment has no real monetary value.

A hot cup of coffee was immediately dispensed into my face. Not just the liquid mind you, the whole kiln baked container followed it through the air towards my head. The red marking across my cheek disappeared after a few days and because the mug failed to smash I avoided any cuts. The bruising on my chin went away after a week or so.

I laughed about it at the time. That wasn’t abuse was it?

Clearly, I’d been insensitive about something she cared dearly about, so I should have taken care to choose my words carefully. My bad!

Towards the end of the relationship we were cooking in her kitchen while discussing the lack of a future together. Then, for whatever reason, she stormed out of the backdoor in anger. Not wanting to upset her further, I left her to calm down and lifted the basket of chips (fries) out of the fryer as they were done. Within two minutes she blasted back into the kitchen and demanded to know why I hadn’t chased after her. I didn’t know I had to!

As I was trying to understand what she was saying, she screamed and swept her arm across the kitchen counter. Like a cat on ninja beer, I leapt upwards and threw myself into the hallway as the fryer hit the floor and sent three litres of boiling cooking oil spilling where my body, groin and legs had been a second earlier.

I didn’t call it abuse. To be fair I hadn’t been injured. But there was something in this one that sat uncomfortably within me. I didn’t think it abuse, but I did think it time to call it off!

A few years later I met the woman who would become my wife. I’d like to say that it was good at first but, looking back, it wasn’t.

The manipulation started slowly. Little moments of tears when I wanted to do my own things, little sighs and gestures of dissatisfaction when she wanted me to do things for her, the odd message that someone thought I was lazy or not good enough if I had a difference of opinion with her.

Before long I was a puppet moving to a web of strings that I could feel, but couldn’t quite see. I was becoming a creature of reactions rather than actions. Words, intonations, looks and gestures, all made me react in certain ways, but I didn’t know why!

I had lost my automation. I had lost what made me, me.

Contact with my friends had all but gone and any attempt to meet up with them was interrupted by a sudden drama or problem. The relationship between my parents and myself was always strong, but I was always too busy with “something” to be able to see them whenever I wanted. Unless she needed money from my parents, in which case we had urgent contact.

But this controlling behaviour wasn’t abuse, was it?

It couldn’t be. Men can’t be abused. In fact, even though I’m only five and a half feet tall, I have a sturdy and solid build that has prevented many a drunken aggravator from viewing me as a suitable target. If I were to lay hands on my wife or my ex I would have destroyed them!

So it’s obvious that I can’t be abused.

So why is it that I am a 40-year old man going through the process of divorce and feeling relieved about the whole thing?

It is quite simply that I stopped looking at abuse as a gender issue and started to see it as a behaviour issue. Once I had read up on the issue and understood abuse as “abuse, the act of. . .” as opposed to man/woman or victim/perpetrator, I quickly realised that for most of my adult life I had been on the receiving end of physical, emotional and financial abuse.

Seeing it for what it is – a non-gendered series of behaviours used to control and maintain a status quo and create an environment that suits the needs and insecurities of the abuser – allowed me to take stock of my situation and develop the necessary mental skills to break away from the situation.

It took time, and it took effort and it is still taking courage, but it’s worth it.

The women I let into my life made me feel like I was valuable until they managed to make me feel invalid and at the mercy of their approval. The self-searching as to why I felt I needed this approval was both interesting and painful, but a sound remedy.

She no longer tries to control me. Her efforts are pointless and now she knows this. I’m in the fortunate position of having children old enough to vote with their feet and because I only live ten minutes away they see me very often. Daily, in fact.

But what I really feel good about is that I don’t hate her. I don’t hate her or my other ex. Deep inside they have something missing. Whether that’s due to social conditioning or something else I don’t know, but I forgive them.

The bruises, the bleeding, the headaches, the demeaning criticisms, the venomous names, the lies, the cheating, the fear of doing wrong, the insecurity of being unwanted, the removal of financial independence, the pain of being made to feel less than useless, the shame, the heartburn, the panic attacks, the suicidal thoughts — I forgive it all.

But this forgiveness can’t be had for free. There is a cost.

And the cost of forgiveness is that I must let you go forever; leaving you to face your insecurities alone.

But I still wish you peace.

I have nothing to add except [STANDING OVATION.] Thank you, JC, for taking the time to share what can only be described as a transformative experience. I wish you peace. Well done.