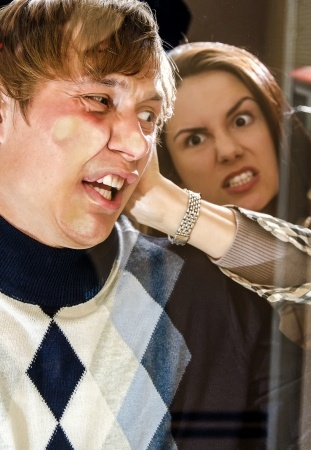 While men comprise half of all domestic violence victims, there ‘s currently only one DV shelter in the US that accepts men seeking safety from their abusers (the Valley Oasis Shelter in Antelope, CA). Meanwhile, there are approximately 1,800 shelters available to women and their children nationwide.

To the best of my knowledge, there are no court advocacy programs for male victims of domestic violence. Men (and their children) are not eligible for state and federal stipends for safe housing from their female abusers. There are no free or subsidized counseling programs nor are there free legal services/legal aid for male victims of domestic violence.

According to RADAR (Respecting Accuracy in Domestic Abuse Reporting), less than 10% of the United States OVW’s (Office of Violence Against Women) funding is used to help male victims. A big part of the problem lies in the very names of the OVW and the VAWA. “Violence against women” is exclusionary and ignores half of all domestic violence victims.

The U.S. Department of Justice refuses to fund research about male victims of domestic violence. On page 6 of the DOJ’s solicitation for proposals on intimate partner violence and stalking, they have a section that explicitly states what kind of projects they will not fund, including:

Proposals for research on intimate partner violence against, or stalking of, males of any age.

With the lack of services and funding and the refusal of the DOJ and the CDC to approve and fund research on male victims of domestic violence and sexual assault, many people might come to believe that these issues are not a problem for men and boys.

In reality, men are approximately 40% to 50% of domestic violence victims. Sadly, many people are still horribly ignorant about domestic violence in large part due to persistently dishonest and misleading public awareness campaigns, data gathered via unscientific methodology and woozles like the 1 in 4 woozle about rape on college campuses.

In His Own Words and In Her Own Words

To raise awareness of male domestic violence victims and female abusers, I will publish an In His Own Words and In Her Own Words  on Shrink4Men everyday in October. These posts will be from men who are or have been victims of domestic violence and women whose husbands, boyfriends, sons, brothers and friends who are victims of female perpetrated violence.

Heterosexual men aren’t the only invisible domestic violence victims. The four other populations that are also ignored are individuals in same sex relationships, the transgendered, the new partners of men with abusive exes as well as family members who have become estranged from their sons, brothers, nephews and grandchildren due to their being involved with an abusive female wife or girlfriend. There is often collateral damage in domestic violence and the domestic violence industry is ignoring the new wives and families of origin of male domestic violence victims as well, so I welcome your stories, too.

If you would like to share your story about female perpetrated domestic violence, please send it to shrink4men@gmail.com. I am looking for written narratives and/or audio or video recordings that describe or illustrate the abuse you have suffered. If you have an audio or video file of your wife, girlfriend, ex, etc., in the midst of an abusive episode, I will publish those as well.

If you would like to submit your story, please adhere to the following guidelines:

1. Limit written testaments to no more than 2000 words and send as a Microsoft Word Document.

3. Please send video/audio recordings in a format that can be readily uploaded to YouTube.

4. If you send and audio/video recording, also provide a written description of the file (i.e., the circumstances leading up to the abuse episode).

5. Edit out identifying information before sending Word, video or audio files, unless these incidents are already part of the public record.

6. If your abuse case is already a matter of public record (e.g., in a newspaper or online publication), you may use identifying information.

7. Use DV SUBMISSION in the subject header of your email.

Due to time constraints, I may not be able to use submissions that require a great deal of editing, so please try to have your materials in the best shape possible before sending.

Thank you in advance for helping us support men and their children who are victims of domestic violence.