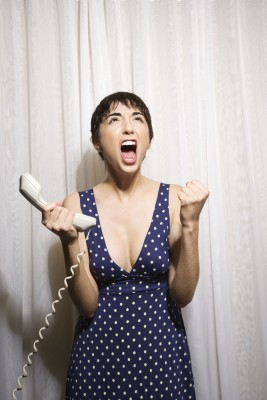 The following article is written by another CrazyBuster, SSG. SSG and her husband have found ways to manage his high-conflict ex who is more subtle in her emotional terrorism. She’s more of a “quiet one” or covert abuser.

Next week, I’ll post Covert Abuse: Watch Out for the Quiet Ones, Part Two. The second post will offer specific suggestions for managing this type of high-conflict ex:

When most people think of a high-conflict ex, they probably envision the shoe-throwing, door-slamming, tire-slashing, cheek-slapping, tire-screeching and/or threat-screaming archetype. Unfortunately, this is often the case. Overt abuse is generally easy to identify.

Covert abuse, like passive-aggressive behavior, is often tougher to identify, but can be just as damaging, if not more so than overt abuse. Covert abuse, in my experience, can cause a person to doubt themselves and question their own sanity.

My husband’s ex-wife is one of the “quiet ones” or covert abusers. Although she wasn’t a rager or door slammer, the pain caused to my husband and the harm done to his relationships with his children was undoubtedly no less than that caused by the more overtly loud or violent types. His situation didn’t include holes in walls, deflated car tires or bruised skin, but that doesn’t mean he hasn’t suffered real and lasting damage.

My husband’s former wife had an affair, threw him out, moved the kids out-of-state with the new man (who soon cheated on her and left), lied to the children about what happened (rewrote history), held my husband’s access to his children over his head as a control mechanism and then, finally, punished him in the worst way she could (convincing the children to stop contact) for putting his life back together, moving on and remarrying.

My husband’s ex-wife isn’t a yeller. She’s small with a high-pitched voice and a demeanor that seems to squeak, “Am I okay?” But I have heard her teeth-clenched voice over the phone as she strains to keep her rage from simmering over. Her emails hold more venom than the worst curse words. Although, aside from the sheer frequency of them, they’re nothing you would show to anyone in authority to prove anything.

I mean, what’s wrong with e-mailing a Bible quote or 50 to people who never answer your e-mails? Isn’t it normal for divorced parents to communicate “about the children” or “for the children” on a regular basis even though none of the communication mentions the kids anymore? What’s wrong with leaving innocent voice messages when you have been asked repeatedly to stop?

Even when my husband’s ex was on her “best” behavior (prior to meeting me), she was setting the stage for full-blown parental alienation. She withheld critical information about their children from him and wove a cocoon around her and the kids that was solidified by the information she withheld from him.

She didn’t consult him about things like cars, braces, unchaperoned spring breaks and travel. While she kept secrets, my husband was allowed to have no privacy nor personal life after their divorce. One time she even tracked him down at the hotel where he was vacationing with a girlfriend for a weekend get-away. She did this, of course, “for the kids.”

Although my husband’s ex-wife did not respect him and encouraged their children to follow her lead, she still tried to prohibit him from moving on with his life. My husband’s ex began acting out as soon as she learned we were dating in a seemingly desperate struggle to not feel abandoned by the man she threw away. Because, you see, for some high-conflict individuals, people take on more value when someone else wants them or when they don’t need you anymore.

The first acting out episode was quite dramatic and channeled through their youngest child a.k.a. the ex’s best weapon. My husband’s ex had their youngest child make a screaming, crying phone call to him and accused him of not loving her anymore because he had a girlfriend.

After my husband and I became serious, his ex-wife’s transparent cries for attention and control ensued. For example, the predictable, manufactured, exaggerated or totally fabricated holiday or Friday evening crises. She refused to split visitation travel expenses evenly with my husband anymore. The kids’ summer and spring break visits to my husband’s home came to a screeching halt. If he wanted to see his children, he had to be the one to travel there.

Knowing she had full psychological control of the children, he went along with the game. I rolled my eyes. And we went on with our lives.

I figured her immaturity, which is what I thought it was at that time, would continue. But my husband and I had no idea what we were in for after we married. For the next two years, we experienced severe, constant harassment dressed up as normal communication. Five months into our marriage, the kids stopped talking to their father with no explanation.

The deafening silence was intermittently interrupted by wild, revisionist accusations the kids were fed by their mother. Meanwhile, my husband’s ex would call him attempting to rehash their marriage and divorce and swear to him, ten years later, that she really hadn’t cheated.

The first year of our marriage, the assault from “the quiet one” was particularly savage.

I witnessed my husband experience shock, then extreme confusion, self-doubt, upset, anger, torment and months of despair. Toward the end of our first year together, we went to a psychologist for help. There, we were given the tools to handle someone the doctor described as having borderline personality disorder (BPD).

Mainly, we learned to set boundaries. At the advice of both the doctor and the Crazybusters, we stopped allowing the ex to have private communication with my husband. This is very important. Abusers like my husband’s ex count on being able to isolate their targets. She knew she could get away with manipulating my husband or engaging him in anger one-on-one.

Private, one-on-one communication with an abusive, high-conflict ex is like a “warm bath” for  them.

My husband stopped taking her calls and we set up a joint email account for her to relay information about the kids. We told her we didn’t want to hear from her unless there was an emergency. Basically, we stopped rewarding her bad behavior (withholding the kids) and let her know her intrusion into our lives was not welcome.

Just as many crazy, abusive, high-conflict BPDs are want to do, my husband’s ex viewed our new boundaries as a challenge. She persevered in her mission to keep my husband from moving on with his life, to keep the focus on herself and to maintain control. Again, she used a variety of predictable and obvious tactics to try to keep my husband engaged with her.

She sent medical co-pay invoices knowing full well that my husband, who pays the kids’ medical insurance, was not responsible for them. She called our home phone and left messages asking us to send information she already had — like our mailing address to which she was mailing the co-pay invoices! She called at all hours hoping my husband would answer, which he never did. Subsequently, she left follow-up messages saying she was going to get an attorney because we wouldn’t take her calls or respond to her transparent ploys for attention.

Then the incessant e-mailing began. The messages very rarely had anything to do with the kids. They arrived in rapid succession and were rife with meaningless content for the sole purpose of seeking my husband’s attention. Although, she did send us photos of the kids – with herself in the pictures!

The barrage of unwanted communication from my husband’s ex continued — even though the kids refused to return his calls. But, by sticking to our rock solid boundaries – and it required effort from both of us – we weathered the storm.

Eventually, the children reconnected with their father as they grew older. Albeit, the relationships are fragile. My husband accepts that this might be as good as it gets due to the fact that the children lived under the influence of his ex, whom we liken to a cult leader, for over 10 years.

After 5 years of game-playing, my husband’s ex finally got that we weren’t going to go along with her crazy game-plan. While she still makes some communication attempts, like toxic fumes seeking cracks in a wall, she’s no longer a force in our lives. Our marriage is good and we are strong.

Thanks, SSG, for your first stellar contribution to Shrink4Men! Be sure to check back next week for Part Two.