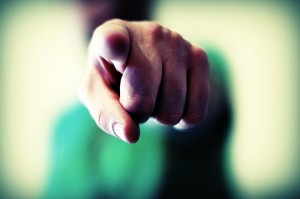 This was one of the bigger questions I faced, after things ended with my ex. Admitting to myself that I needed therapy was akin to admitting guilt to all of the things I had been accused of. It felt like I was surrendering and agreeing that she was right – that it was all my fault. My ex, in the meantime, seemed to be skipping merrily along, looking for her next boyfriend. She seemed to be dealing with things okay. She must’ve been right. It must have been all me.

Nothing could be further from the truth. THIS is why you need therapy.

I’d originally started therapy while she and I were together. She’d been nagging me about it for a couple of months. She wanted me to stop “sabotaging our relationship” by deliberately doing things to anger her (such as spending too much time in the bathroom or not enough time washing my hands or opening the door for her or buying a book or countless other infractions). By doing all of these things, I was “rebelling against her” (her words) and it needed to stop if the relationship was to be saved. Naturally, I wanted things to be like they used to be at the beginning, when I could do no wrong. Obviously there was something inside of me that was driving me to rebel against her.

Finally, after a particularly egregious rage episode against me, coupled with another incident that I’ll write about momentarily, I sought help. I was doing it for us. I was doing it to save the relationship (she was fond of telling me I “needed to fight for the relationship or die trying”). And these were all the wrong reasons, as I soon figured out.

The first time I sat down in my therapist’s office, I completely lost it. I literally did not know where to begin. I remember a non-stop flood of tears. I was a wreck. The rage episode I mentioned above was the one where my ex finally broke me. I had literally heard a *snap* sound in my mind, as she finally convinced me of the truth of all of her accusations. She finally convinced me that I had done all of the things she had accused me of, but since I didn’t remember doing them, I was the mentally ill one. It was obvious to her that I had multiple personalities and that they were out to get her. Additionally, she had recently informed me that a friend of hers had raped her during a camping trip the day after I’d proposed to her. At this point, as much as I am loath to say it, I have my doubts that the rape actually happened.

My therapist listened patiently as I explained all of my sins and how I needed to find a way to stop rebelling against my ex. She listened as I told her how horrible I was. She listened.

Even though I was rote-repeating everything my ex had told me about myself, she listened, and did not pass judgment. As I began to explain things and defend my ex rather than myself, I began to notice something:  even if what I was saying was wrong, somebody was actually listening to me and allowing me to speak.  This, in itself was huge.

My therapist didn’t take sides, until she knew I was ready for her to take mine. When things finally ended between me and my ex, she told me what I already knew deep down inside: it wasn’t my fault. I was not the person I’d been convinced I was and that my ex had some serious, serious issues. We talked about Borderline Personality Disorder and though she wouldn’t diagnose my ex, she agreed with me that it sounded like things definitely leaned in that direction. And this is where the real work began in my therapy sessions and why, like it or not, if you’ve been through this sort of relationship, YOU need therapy, too.

This does not diminish your ex’s problems. Your ex most definitely has problems and needs her own help. You need to come to terms with the fact that she’s never going to acknowledge this nor will she seek out this help – most likely, ever.

The problem is, she has infected your mind to such an extent that figuring out who you were and who you are versus who she led you to believe you were is no longer easy.

Some of the literature I’ve read online about coming out of these relationships refers to the phenomenon of “fleas” – as in “if you lie down with dogs…”  If you come out of a relationship with someone who has BPD, there will be remnants in your psyche that need to be dealt with. My own personal metaphor was a bit worse than fleas – I likened it to having slept naked in a bed of raw fiberglass and picking out the seemingly endless supply of shards.

This will be a long and painful process.

I’m not going to lie to you about that.

Ultimately, though, you can handle it. And you will find it easier with time and well worth the effort you put into it.

Over the course of time, therapy has helped me not only rediscover who I was (and what made me susceptible to this sort of relationship), but helped me find who I am now.

My weekly 50 minutes were like a safe-zone where I could take a time-out from the world around me and explore things in a manner that was non-judgmental and allowed me to be who I needed to be in the moment. Honestly? At one point, I literally, physically beat the hell out of the couch, even though I’m not a physically violent person. Yes, it helped.

Your ex may will never take responsibility for what she has done to you. But you can take responsibility for how your life unfolds from this moment onward. A good therapist can help you with all of these things. You may not find the perfect therapist at first. Keep looking. Whether you decide to avail yourself of Dr. T’s services [full disclaimer: I have not, other than by being a reader and contributor to this site] or those of someone else, find someone compassionate and willing to listen and help you. They are there to advocate for you, to you.

I wish I could say there’s a set time-limit on therapy. I wish there was an equation of 1 year of relationship with a Cluster B = 1 year of therapy. Each of us are different and each of us have our own resilience.

You can bounce back and you can have a life again. A good therapist will help you and support you in that goal.

My ex eventually decided that she didn’t like the thought of me going to therapy, as I was “turning it into something all about me” instead of focusing on why I was rebelling against her. She probably also became afraid that my therapist would figure out the truth (or help me figure out the truth) about what was really going on in the relationship.

Therapy is about you. It’s supposed to be.

And it’s about rediscovering yourself and making sure that relationships like these never happen to you again.

This is not defeat. This is about living well.

And if you need to couch it in these terms, as George Herbert said, “Living well is the best revenge.”