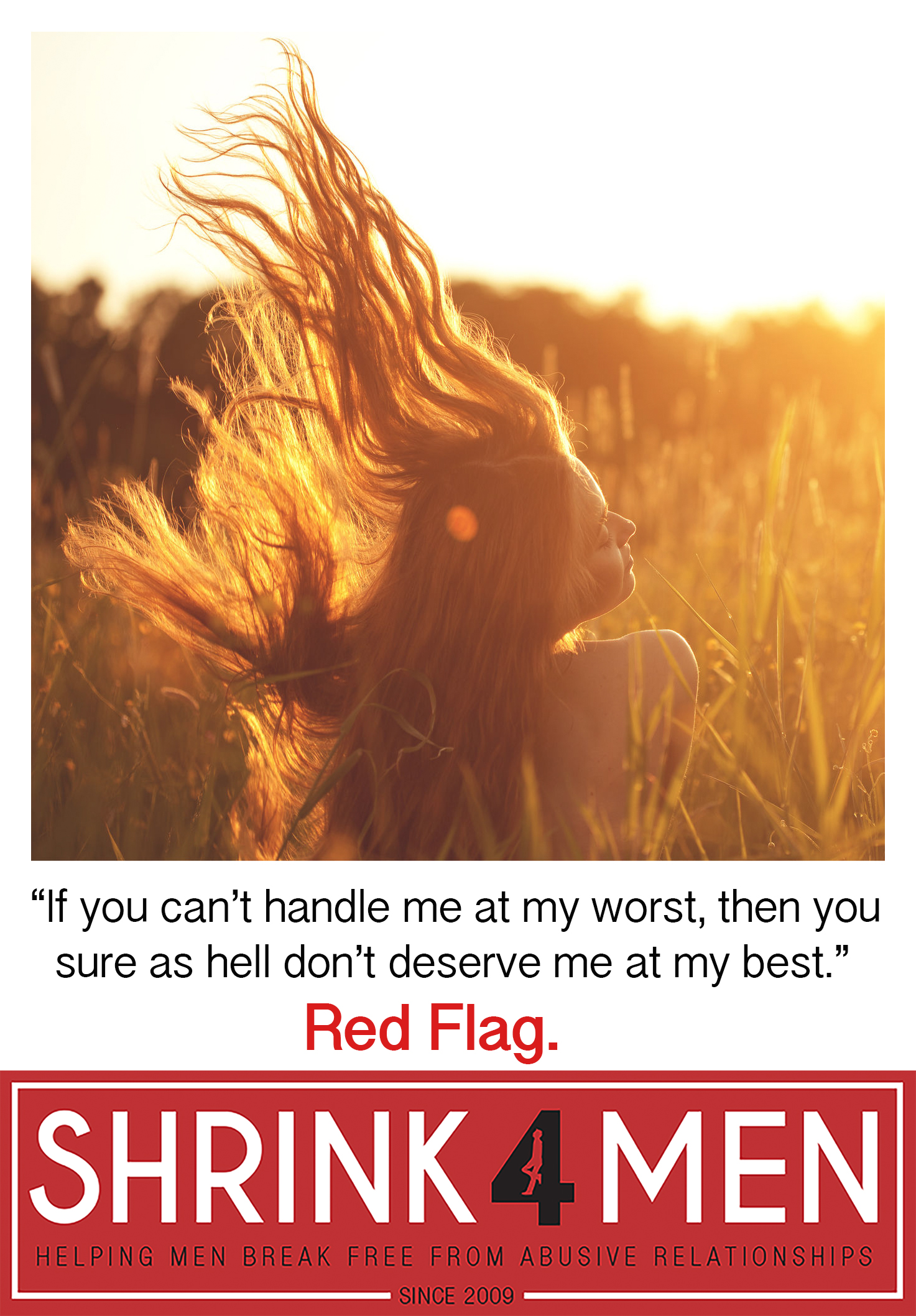 Recently, a Shrink4Men Forum member shared an article link that had been making the rounds on social media. Ordinarily, I make fun of the use of Trigger Warnings. That being said, I feel obligated to issue both a Trigger Warning and a Ridiculous Nonsense Warning as many of my readers, both men and women, are or have been victims of narcissists, borderlines, histrionics, psychopaths, sociopaths and other abusive and predatory personality types. Therefore, consider yourselves warned:

How to Love a Woman Who Has Been to Hell and Back by Kathy Parker.

This article could easily be titled, How to Allow Yourself to Be Abused by a Female Narcissist, Borderline or Psychopath and Like It! And If You Don’t Like It, You’re a Heartless, Selfish Jerk! The behaviors of the “hell and back woman” are classic examples of abuse commonly perpetrated by Cluster B personality disordered individuals.

These personality traits, attitudes and behaviors don’t magically become acceptable, forgivable, excusable, admirable or noble when embodied in a woman. They’re evidence of severe characterological pathology whether the individual in question is a woman or a man. It’s nothing to be normalized and romanticized, which is what the author does. The author is normalizing and romanticizing abuse when perpetrated by personality disordered women.

And what does the author advise her readers to do when abused by “a woman who has been to hell and back?” She encourages us to “love her harder.”

Abusers don’t respect and appreciate their victims’ willingness to tolerate abuse. Taking abuse doesn’t cause your abuser to realize, “Wow. My boyfriend or girlfriend is such a good person. I should be more appreciative and kinder to him/her after I test him/her with more abuse to see how much he/she loves me.”

It just doesn’t work like that. The more willing and complicit a victim you become, the more your abuser’s contempt for you grows. Abusive personalities see virtues such as kindness and patience as weaknesses to exploit, not admirable qualities to emulate.

Ms. Parker encourages readers to tolerate a clearly disordered woman’s unending abuse to prove your love for her. That advice is, in and of itself, effing crazy not to mention dangerous. If  “a woman who has been to hell and back” makes false allegations of domestic violence or child molestation against you, are you supposed to be understanding and sympathetic of that, too?

Of course not! You protect yourself from that kind of dangerous wingnut. You don’t say, “Thank you, madame, may I have another? I understand all your ex partners were big meanies who didn’t like the way you treated them either. It’s okay. I’ll stay with you even if you have me falsely arrested, get me fired, lie to me and smear me to my friends and family because you’ve been to hell and back”

In the article, the author throws down the gauntlet, “Are you strong enough to be abused by an abusive woman and wear it as a badge of honor?” If you’re not willing to take it and like it, the shame is implicit. Reading the article, I wondered if the author would instruct her audience to “love harder” when being abused by “a man who has been to hell and back.”

To be fair, the author doesn’t specifically call men out (reread it — she doesn’t use gender pronouns). But it’s easy, perhaps erroneously, to assume men are being told to “man up” in the face of a woman’s abuse. At least that’s what I read between the lines. While my practice and website is Shrink4Men, I also work with women who are victims of narcissistic, borderline and sociopathic abusers. Many of these women are in lesbian relationships. I instruct my clients, male or female, uniformly.

Abuse is wrong. Abuse is not love. Tolerating abuse is not love, nor is it a measure of love, patience or any other virtue. Confusing abuse for love and a willingness to tolerate it is often an indicator that you grew up in a family with an abusive parent and a codependent parent. You’re not a bad, selfish or mean person for wanting to be treated with the same respect, kindness and consideration you show others.

You’re not being unreasonable to expect another adult to hold her- or himself accountable, take responsibility for her or his choices and behaviors and to behave with basic decency and integrity. You’re not selfish or wrong to have healthy enforceable boundaries. And ending a relationship with an abuser, female or male, is nothing to feel guilty about — it’s the sensible and healthy choice.

Narcissists, borderlines and psychopaths are broken people. Codependents are broken people, too, but there are some fundamental differences. Broken people who aren’t characterologically disordered don’t use “being broken” (or “having been to hell and back”) as an excuse or justification to hurt others. They don’t revel in their brokenness and demand that others love them no matter how deplorably or irrationally they behave.

You can’t fix anyone else, nor is it your responsibility to do so. And that’s a good litmus test for whether a person has been hurt or is hopelessly disordered. Does the person take responsibility for their behaviors and choices, or do they expect others to enable them and put up with their toxic behavior?