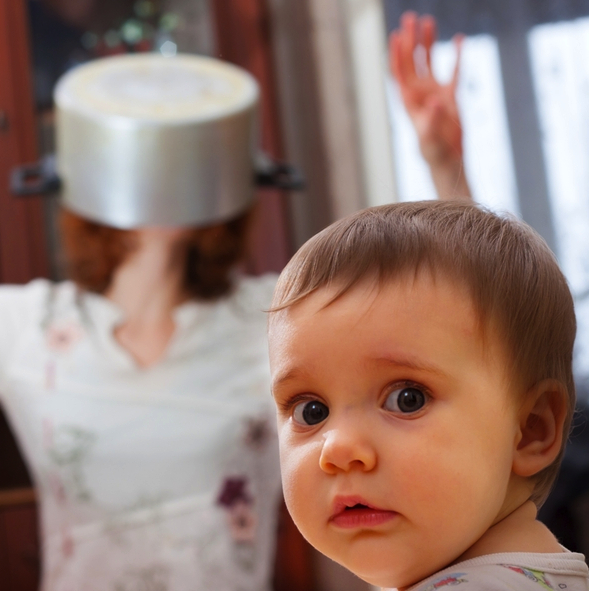 Why does my wife seem to always find fault with our children’s school and routinely insist on changing them? Why do my kids’ teachers look at me like I’m a serial killer when I attend parent teacher conferences? Maybe it’s all in my head, but why does it seem like my ex is deliberately trying to sabotage our children’s education? Why does my girlfriend insist on treating our pre-teen kids like they’re still babies?

Why does my wife feed our kids a steady diet of junk food? Does she want them to be obese? Why does my wife seem to take pleasure in telling me when our daughter misbehaves and gloat when I punish our daughter or become angry when she doesn’t think I’m being tough enough on our daughter? My ex allows our 12-year old daughter to sleep in the same bed with her. Is this healthy?

My husband’s ex-wife still hasn’t potty trained their son and puts him in pull-up diapers. He’s 14-years old. What the hell is going on? He doesn’t soil himself when he stays with us. My ex seems to get mad when I spend time with our kids and take them places or buy them little gifts or new school clothes. She acts as if she’s jealous of them. Is this possible?

Many men and women in my practice have made the above observations and asked the above questions. The subject of maternal sabotage is also one of the many common themes on the Shrink4Men Forum. It can be difficult to wrap one’s mind around this topic. What kind of a mother would deliberately try to sabotage her child’s intellectual, emotional, psychological, physical and moral development?

Then, there’s another kind of parent, oftentimes a borderline and/or narcissistic parent, who seems to deliberately sabotage their children’s education and development by regularly changing schools, not providing their kids with the stability and consistency that facilitates learning and good school performance, feeding their kids a poor diet, encouraging prolonged dependence on mommy, competing with their kids for attention and a host of other supremely unhealthy behaviors. Why do many BPDs/NPDs and other personality disordered parents do this?

1) Exposure. If and when the BPD/NPD parent has exposed her asshattery to a teacher(s), other parents, coaches and/or school administration, she may push to change the children’s school. One could argue that the BPD/NPD is embarrassed, but many of them appear to be quite shameless — and relentless. More likely, her mask of super mom, single martyr mom or victim of my POS ex-husband mom has slipped and she has revealed which parent is the actual problem.

After the BPD/NPD parent has exposed her difficult nature, she will often concoct some reason why the “children” need to change schools and get a “fresh start.” Once the teachers et al know the true source of the conflict, the BPD/NPD can no longer conduct smear campaigns and blame shifting nor can she control the narrative. Oftentimes, this is the real reason behind frequent and/or multiple school changes.

2) “Winning.” During and after a divorce or break-up, the BPD/NPD wants to “win,” which typically means inflicting maximum pain on you for “abandoning” her (even if she initiates the break up). Oftentimes, this individual weaponizes shared children and engages in parental alienation. She may also try to impoverish you by using the courts to extort as much child and spousal support as possible. She equates “winning” to hurting you and taking or destroying anything or anyone you care about or love and that includes the children.

For example, a former client’s ex is trying to block their eldest child from attending the best school in their area, which happens to be a free public school (grades are good enough and they won the lottery). Instead, the ex wants to keep the child in an expensive private school. Why? She manufactured some very lame reasons about it not being fair to their younger child if the older sibling is able to get a better education.

In reality, it’s about the ex gouging this guy for as much money as she can. Even if she doesn’t see a penny of it, she wants him to pay and keep paying. A BPD/NPD ex often equates the amount of money, child support and assets she can extort from you with her sense of worth. Additionally, this kind of individual does not seem to have any qualms about hurting the children in order to hurt you. As you probably already know, hurting the children is often the very best way to hurt you.

3) CONTROL. The BPD/NPD is the decider. She believes she is entitled to unilateral control over the children. She often sees the children as her property and you are expected to pay a Golden Uterus rental fee for the rest of your life. Even if the court awards joint decision making regarding schooling and medical issues, the BPD/NPD will typically do her best to withhold information and cut you out of all major and minor decision-making — that is until it’s time to pay the bills for her unilateral decisions. You are then expected to pony up. Immediately.

Ultimately, you may be at cross-purposes with a BPD/NPD ex. If you are advocating for the children’s best interests, she will be argue and push for the opposite. Why? To show you who is in control. And if the children get hurt as a result, she will blame you.

4) Children shouldn’t raise children. A BPD/NPD is often described as a child in an adult’s body. Emotionally and psychologically speaking, this is often true. These individuals can be incredibly immature and seem to be stuck at an early age of emotional development. Many of my clients who share a child with a BPD/NPD mother watch in amazement (and relief) as their children surpass their wives in emotional maturity, empathy and problem-solving skills.

There’s a reason our society frowns upon teenage pregnancy and teenage parents. Morality and religious beliefs about premarital sex aside, the simple fact of the matter is that children have not reached the optimal emotional maturity or intellectual capacity to be parents. The same is true of parents who are children in adult bodies. Personality disordered and/or emotionally immature parents frequently parentify their children (i.e., makes the child responsible for meeting the parent’s emotional and/or physical needs), which is a form of child abuse.

5) Sibling rivalry. A BPD/NPD mother is often jealous of her own children and sees them as competition for attention, love, admiration and resources. The possibility that her child may surpass her scholastically, in attractiveness, in popularity, in physical fitness, in athletic ability, etc., can be very threatening to a BPD/NPD mom. The opposite can also be true. For example, a mom who sees her child’s success as a reflection of her worth and pushes her child to succeed to the point of abuse (think Tiger Mom).

Sibling rivalry for one’s child can manifest in several ways. For example, your BPD/NPD wife “tattles” on the child and takes pleasure in watching you mete out punishment for misbehavior, a BPD/NPD sets up the child to get him/her into trouble, feeding the child a steady diet of fast food/junk food/processed foods  to make the child fat so mom can seem skinnier and prettier in comparison (this is especially common with BPD/NPD mothers and daughters), having a scapegoat child and a “golden child” and pitting them against one another, becoming jealous when the child’s father (her ex) buys them new school clothes, takes them on vacation, to concerts and other special events and making anything that happens to child, good or bad, about her.

6) Bad role modeling. A BPD/NPD parent often lacks empathy, is entitled, rejects personal responsibility for her behaviors, engages in bullying and intimidation, is dishonest, has the relative morality of a small child, has chaotic and extremely dysfunctional relationships, has no sense of fair play and is completely self-obsessed. Enough said.

7) Fear of abandonment. A BPD’s/NPD’s fear of abandonment may take the form of infantilizing their children or one of their children. This is a particularly insidious form of abuse and, in some ways, is the opposite of child parentification. A parent who engages in infantilization is unable to tolerate her child’s developmental growth toward healthy independence. Whether it is the fear of abandonment or the need to be needed, an infantilizing parent is threatened by and acts to undermine the child’s age-appropriate emerging independence (Bogolub, 1984).

In the context of co-parental conflict, separation, or divorce, the infantilizing parent may experience the separation associated with the child’s time in the other parent’s care as a narcissistic injury (a loss of self) prompting depression, anger, and/or anxiety. These emotions are communicated to the child no matter the (court-ordered, therapist scripted) reassuring words that are spoken, fueling the child’s resistance or refusal to return to the other parent’s care. Like the parentified child, this child may feel responsible for the parent’s well-being in absentia, but not in a care giving capacity. Instead, the infantilized child is at least implicitly aware that his or her continuing dependency fulfills the enmeshed parent’s needs.

Oftentimes, children who are being infantilized may develop depression, anxiety, developmental delays and may even be misdiagnosed with an autism spectrum disorder. In addition to meeting a BPD/NPD mom’s emotional needs, infantilizing a child to the point of debilitation can provide a BPD/NPD/HPD mom with attention (in the extreme form this could be Munchausen by Proxy), social status, money (e.g., state benefits or prolonged child support monies) and/or maintaining a connection to the father of the child post-divorce because the child has “special needs.”

I know of cases in which diagnosed and undiagnosed BPD/NPD moms allow children to regularly sleep in their beds well beyond an age that “co-sleeping” is appropriate; a mom who continues to allow her teen-aged child (who has no urological or bowel impairment) to wear pull-up diapers because it is “easier;” moms who use baby talk with their teenaged kids; moms who sabotage their children’s peer relationships, which results in the kids spending more time at home so mom isn’t alone; and a mom who has deliberately sabotaged her special needs adult child to the point where the adult child is in a near vegetative state in order to continue to collect state benefits for her care and is enabled by medical doctors in doing so.

The above list is by no means exhaustive. There are many other ways BPD/NPD and other personality disordered parents sabotage their children’s educational, psychological, physical and moral development. The information contained in this article is just one of the reasons I cringe when I hear a client or forum member claim, “Yes, she’s abusive to me, but she’s a good mom.” It is my opinion that individuals with these personality disorders are constitutionally incapable of truly being good parents and this article provides a sampling of just how destructive these kinds of parents can be.

What ways have you observed your wife, girlfriend, ex or husband’s ex sabotage her children?