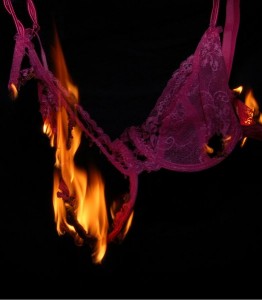 When I was a young woman in my twenties, the concept of burning my bra sounded glamorous. However, I never did get around to actually burning a bra. Bras are expensive.

I thought Gloria Steinem was a brave trailblazer and subscribed to New Woman magazine. I got a job and contributed my share to the household expenses. And I feigned all kinds of outrage at the social injustices inflicted against women, past and present.

There was a time, not that long ago in the grand scheme of things, when women were treated like second class citizens. The women who stood up against all of society, to the detriment of themselves, their families and sometimes their own lives, in protest of the mistreatment of women, are truly heroes.

But feminism has, in my opinion, carried the cross too far.

Women can vote. We can educate ourselves. We can control our own reproduction, and we have laws in place to protect us against discrimination in the workplace.

It seems to me that what many women want and expect from society is not equality, but rather a handicap. Having a handicap in life is not the same thing as having equality, and it makes the men who are suffering slights at our expense, resent us for it. It’s counter-intuitive.

And nowhere is this phenomenon more unjust than within our own justice system.

Witnessing the way the Family Courts work, from the viewpoint of my husband in dealing with his abusive, high-conflict (HCP) and potentially personality-disordered ex-wife, it’s not only unjust, but, in many cases, the “best interests of the children” are completely overlooked in favor of the best interest of the Golden Uterus.

There is an across-the-board presumption in divorces involving child custody, that the child(ren) should automatically be awarded into the primary custody and care of the mother, with the father paying child support and, in many cases, spousal support as well. In the rare instances where the father manages to retain primary custody of his children, there is usually no support of any kind mandated from the mother to the father.

I know of a man who has primary custody of his children, who is also still mandated to pay “child support” to his ex-wife, who has the option of seeing her children or not, and often chooses the latter. Yet, if this man were to miss a “child support” payment, he would find himself in court and quite possibly face jail time. The double standards in the family courts are disgusting.

If you are in this forum, you have likely been forced to or are facing the very strong reality of being forced to hand over primary custody of your child(ren) to a woman that you know first-hand, is capable of very malicious intent, against both you and your children, in retaliation for being abandoned by you.

As a person who was the child of a woman with Borderline Personality Disorder, I can attest to the fact that Borderlines enjoy abusing their children, at least it seemed that way to me when I was on the receiving end of it with nowhere to escape. And if you are a child left in the primary “care” of one of these individuals, odds are life will be miserable.

Despite this fact, the courts fail to recognize or acknowledge that HCPs  and abusive personality disordered individuals (APDIs) can be a danger to their own children. In fact, the courts view a diagnosed disordered parent as having a handicap or a disease, like cancer, where they should be pitied and their “rights” to be a parent protected at all costs. Never mind the “best interests of the children.”

As a woman who wants to be seen as an equal in society, I am embarrassed by the way the courts practice some unwritten kind of affirmative action plan to elevate women in divorces, to the point where divorce, for a high-conflict and/or abusive personality disordered woman, is profitable.