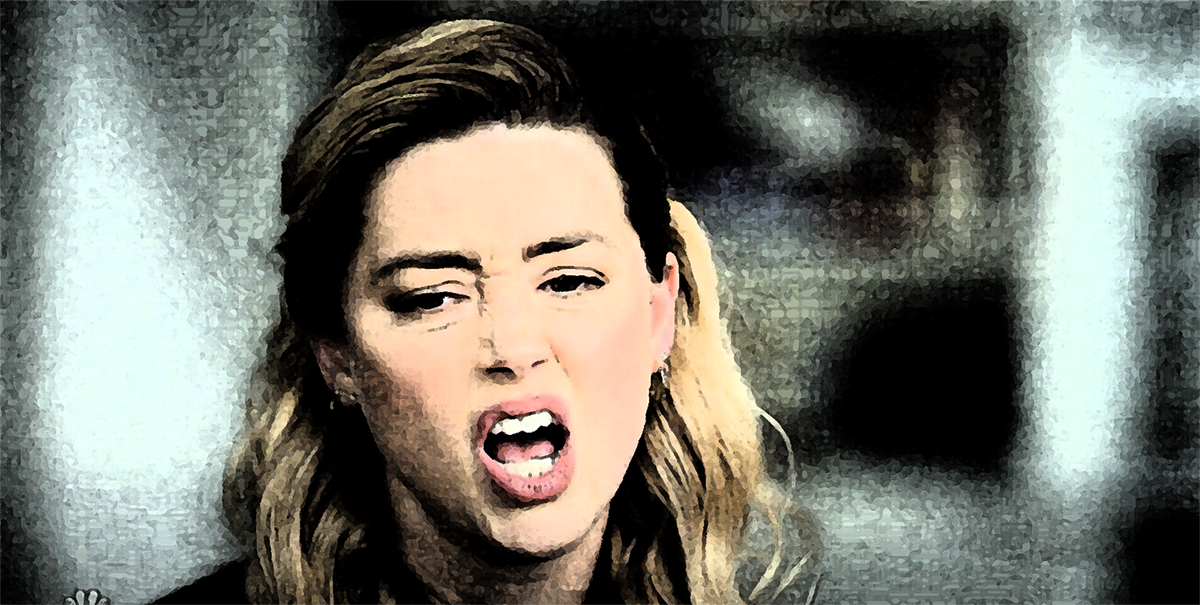 Amber Heard’s “Consequences Are Unfair!” smear campaign interview with Dateline’s Savannah Guthrie is a smorgasbord of self-serving, self-pitying, long disproved bullshit. On the other hand, it’s also a great example of what I call the professional victim’s Victimpalooza Tour. Claiming false victim status is something many narcissists, histrionics and borderlines do at the end of relationships. They persist in victim playing despite overwhelming evidence to the contrary. Just like Amber Heard.

Furthermore, time is irrelevant. Meaning, the smear can go on for weeks, months, years and even decades after the relationship ends. Long before you got together with your respective Amber or Man-ber Heard, they were doing the long suffering victim shtick with previous exes. And they’re going to keep on doing it. It’s a matter of ego preservation vs. ego annihilation. Or rather, in the case of the personality disordered, preservation of the false self vs. annihilation of the false self.

Like Johnny Depp, many clients’ exes continue a false victim smear campaign long after breaking-up or divorcing. Especially in shared custody cases.  Unlike my clients, Amber Heard’s Victimpalooza’s being enabled and reported by the mainstream media. It seems to be a desperate attempt by some to control the “only women can be victims” narrative. Typically, a no profile NPD, BPD or HPD has only their personal social media from which to run a smear campaigns.

To clarify, consequences are neither unfair nor mean. Actually, proportional and natural consequences of bad judgment and/or bad behavior can be incredibly valuable life lessons. Well, for people who are capable of learning from mistakes, that is. For example, touch a hot stove; burn your hand. Ergo, you don’t touch hot stoves anymore.

Another example, you date a violent, emotionally volatile borderline woman or man; your life is nearly destroyed. As a consequence, you get help and henceforth avoid individuals with these conditions like the plague. Want to know why I used nail polish remover as a substitute for charcoal lighter fluid one time and one time only?

Beginning in childhood, we learn right from wrong, appropriate vs. inappropriate, etc., from our families of origin. In other words, we learn what we can and can’t get away with. We learn how to get our parents’ attention — be it positive or negative. As kids, we also learn by not experiencing consequences. Meaning, when parents:

Additionally, kids learn about consequences — or the lack thereof — by parental modeling. In families in which an abusive NPD, HPD or BPD parent is enabled by a codependent partner, kids learn from that, too.

Consequence is the C-word to narcissists, borderlines and histrionics.

Hell hath no fury like a high-conflict narcissist or borderline who’s at long last experiencing a richly deserved consequence for their unconscionable behavior. From watching the Amber Heard vs. Johnny Depp trial, Amber could barely conceal her anger and contempt under cross-examination and the guilty verdict. Unfortunately for Amber, there’s no concealer kit for that!

Statements via Amber Heard’s mainstream media spokespeople and her toady, Eve Barlow, also reflect her rage and unwillingness to accept the consequences of her actions. Amber’s performance in the Dateline interview also reflects it. She cannot, will not admit her lies. Nor will she accept the consequences of her lies. In this respect, she reminds me of two other infamous borderlines with histrionic and narcissistic features — Betty Broderick and Jodi Arias.

All three of these DSM divas defiantly insist they’re the victims of their tabloid tragedies. Never mind that two out of their three victims no longer have a pulse. In their minds, these women are the “true” victims — “imperfect” though they may be. Heard, Arias and Broderick all claim to “still love” their victims.

They all, at one point, basked in the limelight of their crimes. Again, even though two of the actual victims were murdered and one had his reputation and career destroyed, these monsters continue to claim self-defense. Apparently, contrition, culpability and compassion are also C-words for this coven of creeps.

The need for conflict and, in Amber Heard’s case, violence.

From High-Conflict People in Legal Disputes:

Time after time, [high-conflict people] argue against feedback, regardless of how helpful or truthful it may be. And time after time, they try to persuade others to agree with their rigid points of view and to help them attack their Targets of Blame. The issues come and go, but their personality traits keep them in conflict. Their problems remain unresolved and the stress on those around them often increases” (Eddy, 2016, p. 16).

High-conflict people and narcissists, borderlines, histrionics and psychopaths share many traits. Including:

Any way you slice it, they’re a toxic stew that’s best to avoid when possible. If the weeks since the trial ended are any indication, Amber won’t be ignored, Dan! And by “Dan,” I mean Depp.

What do high-conflict people do when you ignore their efforts to engage you in conflict? Create more conflict and VICTIM HARDER.

From trial evidence and testimony, Amber Heard seems psychologically incapable of letting go of her false victim narrative and self-generating conflict with Depp. At least, voluntarily letting it go. It doesn’t matter that he’s moving on, and not feeding the proverbial beast. Although, to a histrionic-borderline, being ignored and “abandoned” is precisely what provokes the beast. It’s a no-win situation.

If Depp gives her the attention she so desperately wants, he feeds the beast. If he continues to ignore her, he feeds the beast. In my opinion, Amber likely won’t stop until someone with the authority to make her stop (i.e., a judge), makes her stop (i.e., injunction and jail for contempt). However, being ignored and deprived of conflict oxygen isn’t the only thing feeding this beast.

Amber Heard also has enablers. Great big powerful, wealthy enablers with mainstream media and political ties. As long as they give her money and airtime, she’ll keep lying, victim playing and defaming. Again, given Amber’s personality disorders and lifelong pattern of high-conflict behavior and cognitive dysfunction, I don’t believe she can stop of her own accord.

Unfortunately, the low or no profile Amber’s have enablers, too. Typically not as rich and powerful, though. Clients encounter them in the form of former in-laws, a biased family court and court apparatchik (i.e., guardians ad litem, parenting coordinators, evaluators, etc.), biased/white knight law enforcement and well-meaning therapists and teachers who are duped by NPD, BPD or HPD.

Unfortunately, as I state in another article, Amber Heard — as full of herself as she is — is nothing special. In fact, she’s incredibly ordinary. Many clients deal with exes like Amber who just will not stop their attacks. Not without court intervention, anyway. However, these are only the cases in which the Amber fears going to court. And, yes, some of them actually do.

In my experience, court intervention only works when the narcissist or borderline has something to lose. For example, public image via exposure. Or, money — either through losing custody time and/or paying my client’s legal fees. And, losing custody time, which means losing money and control of my clients by losing control of the kids.

Typically, court intervention doesn’t work if a judge won’t enforce his or her own orders. As I like to say, finger wagging and tongue-clucking aren’t effective consequences. You can’t shame the shameless. In fact, if you have this kind of judge, don’t bother taking the ex back to court for contempt. When judges don’t mete out painful consequences, it often results in even more outrageous behavior and abuses.

Court intervention usually also doesn’t work on severely low-functioning borderlines, narcissists and histrionics. These are the ones who are in and out of hospitals, shelters, treatment facilities, rehab and jail. If they’re unafraid of these consequences, there’s nothing the court can do except fully revoke custody and/or incarceration.

Amber Heard’s “Consequences Are Unfair!” Smear Campaign, to be continued.

Alas, there’s just too much crazy here to cram into one article. I’ll do my best to have part 2 available tomorrow.