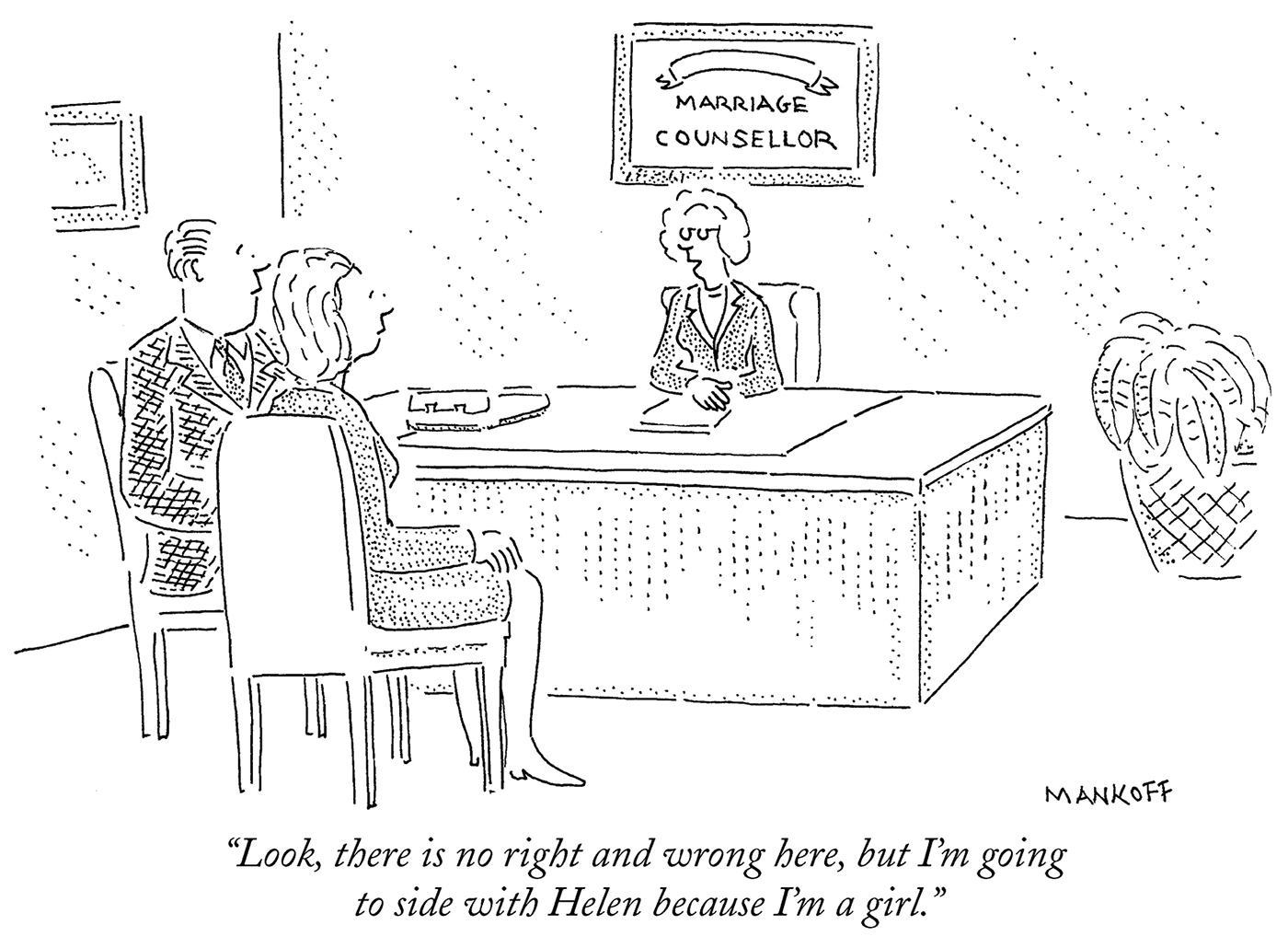 So, you’re attending couples therapy with a narcissist or borderline. Good luck with that! Kidding aside, if you’re seeking help, you may be walking into a buzzsaw if you’re a man and the abuser is a woman. Nowadays, there’s a strong anti-male sentiment in Psychology. Couples therapy with a narcissist and anti-male bias oftentimes becomes therapist abetted partner abuse.

As such, the article’s cartoon is all too frequently true. Over the last 40 years, the mental health field has become increasingly anti-male. This isn’t true of all psychologists and other clinicians. However, it’s so pervasive that in 2018, the American Psychological Association memorialized its anti-male bias in Guidelines for Psychological Practice with Boys and Men.

To clarify, I disagree with much of the APA’s practice guidelines for men and boys and its counterpart for women and girls. The former promotes the pathologizing of men and boys by virtue of being male. Blaming many societal and interpersonal ills on masculinity. The latter views women and girls as unaccountable, passive victims. Both of these views are emblematic of a hate-filled destructive gender ideology toward both sexes, in my opinion.

Questions to screen for anti-male bias in therapists.

Before deciding upon a couples therapist (or individual therapist for that matter), there are several factors to consider. In addition to level of education and training, there are different psychology paradigms (e.g., psychoanalytic, cognitive behavioral, humanistic, etc.) There are also faith-based therapists and gender ideologue therapists.

Many faith-based counselors (not all) have a traditionalist view of men and women. As such, they tend to be paternalistic. Meaning, men are seen as the head of the family. If there are problems in the marriage, it’s because the man isn’t “leading.” In other words, it’s the man’s fault.

Alternatively, gender ideologue (i.e., feminist) therapists approach psychology and relationship counseling through the lens of feminism. Meaning, they see most relationship problems as stemming from male privilege, misogyny and patriarchal oppression. If the woman is acting out, emotionally dysregulating and being abusive, it’s in reaction to toxic masculinity. In other words, it’s the man’s fault. Or, if not his fault, his responsibility to lovingly and patiently understand and accept without labeling her behavior abusive or crazy.

Now, while I find fundamentalist Christian counselors and third wave feminist therapists holding nearly identical beliefs delicously ironic (delicious as in purring whilst licking cream from my whiskers delicious), both  are destructive to their clients. Similar end results, different brand of poison. I urge you to avoid both unless they have reasonable answers to the following questions:

1. Do you believe women are equally likely to be the abusive partner in a relationship?

If the therapist says “no,” is noncommittal or replies that it’s highly unlikely, rare or unusual, politely end the call and keep looking.

2. If you suspect my spouse has some kind of personality disorder or other condition that’s at the root of our relationship difficulties, would you tell us?

To be fair, this is a tough one to answer. In my experience, I typically avoid working with the personality disordered for reasons I’ve explained in other articles and videos. I will, however, tell couples if I don’t believe I can help them. When I tell clients, “I don’t think I can help you,” it’s because:

a) I believe one or both of them has some kind of character disturbance.

c) One or both blindly refuse to accept the reality of their situation. For example, a crazy ex who wreaks havoc and the need for boundaries. Or, marital problems stemming from issues with a severely alienated kid.

d) A potential client wants me to tell his spouse they’re personality disordered and set them straight. In which case, I decline and suggest individual sessions exploring why the individual is in a relationship with someone they believe is abusive and disordered.

3. Do you have experience working with abused men?

This isn’t necessarily a deal-breaker. It depends on how they answer other questions.

4. If you don’t have experience with abused men, how do you conceptualize abuse?

If they answer by rationalizing your girlfriend/wife’s abuse with convoluted mental contortions using gender studies terms like toxic masculinity that blame you, keep looking. Abuse isn’t a gender issue. It’s typically learned in dysfunctional families or origin. Furthermore, if an individual is characterologically disturbed, it’s near impossible to break the cycle. The personality disordered lack empathy, are hypersensitive to criticism, rarely feel remorse for hurting others and see themselves as perpetual victims when, in reality, they’re often the aggressor. In other words, incredibly difficult, if not impossible, to change in any meaningful way.

[*Note to individuals diagnosed with BPD feeling triggered right now: Blaming how you treat others on your BPD doesn’t qualify as meaningful change.]

5. Are you able to set boundaries and confront difficult clients during session?

Over the years, many clients describe couples “therapy” in which their partner or ex took up all the time complaining about and blaming them. Or, dominating sessions with their feelings. When my clients would try to bring up their issues, they were commonly talked over, or their partner would burst into tears making it about their feelings. Once the therapist finally focuses on my client’s issues, the NPD/BPD partner stops going.

Joe and Meg go to their fourth round of couples counseling for “communication issues.” Therapist has them do an empathy exercise. Specifically, to make empathic statements regarding each others stated feelings and complaints.

Meg refuses to go first, even though, as Therapist points out, Joe’s gone first the last three sessions. Nevertheless, Joe goes first and demonstrates empathy for Meg. Next, it’s Meg’s turn. She balks. Therapist begins to give Meg an easy out. Joe calls bull and Therapist agrees.

Meg’s “empathic statements” go something like, “I can understand why Joe feels lonely because he’s such a failure as a husband and father.” According to Joe, Therapist says nothing and starts to move onto another topic.

Joe says, “Not so fast,” and points out Meg hasn’t shown empathy. But rather, verbally attacked Joe. Therapist agrees and asks Meg if she thinks she’s shown empathy for Joe. Meg gives them both the death stare and says, “I didn’t sign up for this shit.” And that was the end of Therapist.

The point? I encourage you to find a therapist who’s comfortable calling out, challenging and redirecting clients. Whether it’s for couples or individual work. Keep in mind, narcissists and borderlines typically don’t tolerate accountability. Nor are they interested in an equitable, mutually reciprocal relationships.

So, what do you do if you’re in couples counseling and there’s a double standard? Meaning, the therapist doesn’t address your wife’s abusive behavior. For example, physical violence, destruction of property, taking your property, badmouthing you in front of and to the kids, etc. Any behavior, if committed by a male, would be labeled abuse.

If you’re a therapist, ask yourself:

As a mental health professional, did you answer yes, it’s abuse, no and yes? Alright. Did you begin constructing rationalizations, justifications and excuses for why your double standard is okay? If yes, stop. You’re being egregiously hypocritical. Furthermore, you might reconsider your ability to work with men, or any group of people you have biases against based on sex, race or religion.

If you said yes, and are now rethinking how you work with clients and are reexamining your beliefs and biases, fantastic. Keep going. If you’re a man who’s currently experiencing this kind of bias in couples therapy, “What would you say if I was treating my wife in similar ways?” is a totally valid question to ask the therapist.

Clients I’ve encouraged to do so usually get one of three reactions:

1. Deer in headlights – goldfish gasping for air mouth. Perhaps the therapist has never been asked nor considered this before. It’s quite possible they’re experiencing cognitive dissonance in real time.

2. Bullshit. The therapist responds with statements that include patriarchy, gender power imbalance, excuse making for female perpetrated abuse and blame shifting responsibility to you for your wife’s behavior. In other words, enablist apologia.

3. Anger and defensiveness. The therapist tells you that asking this question is an act of aggression, evidence of your anger problems, male privilege, insensitivity to the oppression women face, blah, blah, blah — basically anything that blames and shames you.

Recently, Client attended two sessions with Ex regarding their 6-year old Son. Ex abuses alcohol and pot. She’s unemployed living with alcohol abusing Grandmother et al. There are a plethora of other issues as to why she ought not have primary custody. But, Family Court.

During the first session, Ex denies family history of emotional and substance abuse issues. Provable lies. Claims she’s ecstatic to get Son into therapy. Another lie. Client’s tried for years while Ex refused. He has text messages verifying it. Ex tells several other easily refutable lies before time’s up. Client says nothing at the time.

Therapist says it isn’t important. Perplexed yet undeterred, Client speaks up again. He points out that lie isn’t the only lie, and fact checks Ex’s other lies. Ex interjects, “This is why I didn’t want to go to fucking counseling with you!” Client reminds Therapist that Ex said she was ecstatic to finally have son in therapy the prior session.

According to Client, Therapist actually asks, “What’s the point of all this? Why do you think this is relevant?” Let’s pause a moment to take that in, shall we?

The only reason Client was able to get Son in therapy is because Ex claims 6-year old Son is hitting her. Client threatened court, and she consented. Son has never hit Client. This means either Ex is lying and projecting (i.e., she’s hurting the kid). Or, Son’s acting out due to the unhealthy environment at Grandmother’s. Both scenarios are serious and require intervention.

In fact, Therapist, after one session with Client and Ex, diagnosed Son with Conduct Disorder sight unseen. A diagnosis based upon Ex’s claims. The same person who lied repeatedly both sessions. Meaning, she’s neither a credible nor reliable reporter. And still, Therapist thinks Ex lying is irrelevant.

Client spoke with Therapist one-on-one after the second session. He apologized for being “confrontational.” He explained he just wants his son to get help. That won’t happen without accurate information. Therapist didn’t concede and countered Ex believes what she said. In other words, lies the lying liar believes are okay with Therapist.

Client fires Therapist before ending the call. By the way, I helped Client role play prior to speaking with Therapist, so he could be as calm and respectful as possible. He took notes and practiced the role play. He reports he stayed calm and respectful throughout the call. As Client’s story doesn’t change from session to session, I believe him.

Please consider one last point. If a therapist reinforces double standards, doesn’t take lying in therapy seriously and makes excuses for abusive female clients, how likely is it things will improve?