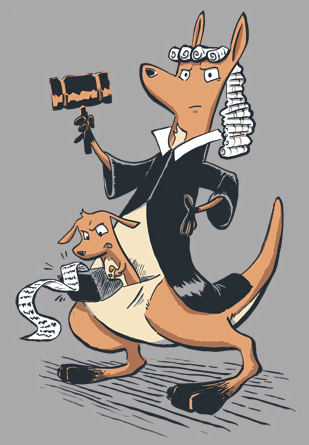 It’s day 17 of Domestic Violence Awareness Month for men and boys, the invisible victims of domestic violence. Today’s In His Own Words is from Jim Muldoon.

Jim prefers that his real name be used rather than an alias. He tells yet another tale of a corrupt and gender-biased family court. In other words, the status quo.

His description of how the mental health field largely enables abusive disordered women is bang on.

I’m not going to tell you Crazy’s name. The fact she doesn’t get any limelight, if she ever gets to read this, will piss her off. She craves attention. She would rather have a crowd questioning her sanity than go unnoticed.

That’s the kind of whacko she is.

Domestic violence isn’t limited to the home, and it certainly isn’t limited to physical violence. Crazy, by herself, did a lot of damage, but not enough to destroy the family. In desperation, Crazy turned to the Australian government for help. With the power of the state, the social engineers did what Crazy couldn’t.

They tore my family apart.

All she had to do was to play her part of the victim, and the lawyers, judges, psychologists and social workers would do the rest.

What makes her Crazy? That is a bigger question than you might think.

When I looked at the various checklists for various mental disorders, I could see how Psychopathy, Borderline Personality Disorder, Obsessive Compulsive Disorder and many other “Disorders” and “isms” might apply.

In short, there was plenty wrong with her. Therefore, it was easy to find yet another label and try yet another “cure.” And every time Crazy emerged still Crazy, but now worse because she had a whole new litany of excuses.

“I can’t clean the house because cleanliness triggers my depression.”

Also, clinical diagnosticians tend to focus on their subject. They asked Crazy lots of questions about her past, her feelings, her hopes, ambitions and disappointments.

Crazy loved it. Her past grew more traumatic with each telling. For the professionals this meant more areas to explore, more conditions to discover, more sessions and more money. Certainly more money than they would have got if they told her to stop lying. No matter the clinical name, front and centre of the cure was that I should remain with her, support her and encourage her whilst taking up the slack.

Implicit in this was if she didn’t get better, maybe I didn’t try hard enough or maybe the fault was mine all along. But diagnosis isn’t about lab coats and clipboards and multi-syllable terminology. It’s about identifying and defining the problem.

The problem was Crazy.

Crazy’s contribution to the home was to turn an everyday hurdle seamlessly from an issue through to a problem and onto a crisis with monotonous regularity. She also ensured that every crisis was that much worse by blaming anything and anyone else. The terms used by psychologists deliberately leave out any moral judgement. This, they say, helps with treatment. Treatment that was never effective.

But the lack of moral judgement has two distinct disadvantages. The first is that it relieved Crazy of the responsibility of ensuring her behaviour did not harm others. In fact, she felt entitled to behave in certain ways because her afflictions were official.

The second is that it denies the humanity of those she harmed. Their problems are considered a mere by-product of the real issue. They are second tier, and therefore second rate. It also removes many potential avenues for justice, an injustice in itself.

But, while a moral vocabulary may be unhelpful for the shrink, it is certainly of value to those being harmed. And not just for name-calling. It gives simple and accurate labels for predicting future behaviour. Consider some of the moral terms I believe apply here: dishonest, arrogant, selfish, lazy, greedy, vengeful, jealousy-ridden, gluttonous, and wasteful.

When I met her, Crazy had two kids to two separate fathers. She assured me that she was on the pill because the last thing she needed was yet another child to yet another father.

When informed that I was going to be father number three, I wanted to provide and protect, etc., for my child. Like many men in that situation, I thought “Surely I can make this work.” Crazy told me she, too, would “make it work.” She told me she had even stronger parental instincts, being a mother. She also had another, deeper reason to “make it work:” she loved me.

A few years, and two more children later, and Crazy walked out, leaving me with all five children. I’d stayed for the kids, but I was not a doormat. I confronted her about her behaviour and ensured she wore the consequences whenever possible.

Crazy’s response was to up the ante and leave. I think she was hoping that I would crumble under the pressure of single parenthood. Then I’d have to beg her to come back and would learn just exactly who was in control.

But, no Crazy meant no chaos. Things got better.

I did some study, got my career going again, and moved to a better house. Even better, I met and married the wonderful Linda. When Crazy heard about this she went on the warpath. Only this time she brought the cavalry.

To single out individual events or institutions would take too long and the trees would get in the way of the forest. Therefore, when I talk about the Australian government, I am not just talking about those directly employed by the government. I am including those “independent” groups and bodies, like lawyers, who suck on the teat of government for their livelihood.

Feminist ideology is the dominant feature of Australian government bureaucracies. Whilst not always at the forefront of every department, scratch the surface and it soon arises. There are numerous fallacies have come to be accepted as gospel truths thanks to the Feminist influence.

Chief among these is the oppression of women, for which all men, past and present, are guilty of. Closely related, in their minds, is an issue they call violence against women, which they claim explains all domestic disputes.

Therefore, the government tried to translate the madness in my life into a story of Crazy being oppressed by me. To do this they employed what Orwell called doublethink.

Take, for example, her walking out like that. There were times it was portrayed as a symptom of her depression. On other occasions it was my oppressive ways, like keeping the money for rent and groceries, which forced her out.

Had I walked out like that, it would have been called abandonment.

One conversation between a Feminist drone and my son paints a thousand words. He was trying to tell the drone that his mother, Crazy, was the problem. The drone wanted to blame me.

Son: Mum is manipulative, goes into rages and is sometimes violent.

Drone: Did your Dad hit you?

Son: No, Mum hit us much harder and more often than Dad ever did.

Drone: So, you’ve just admitted that Dad did hit you…

This bigoted approach was there in every aspect of my dealings with them. Anything that she did wrong was ignored, excused or minimised. Any fault on my part was exaggerated and referred to repeatedly, no matter how irrelevant it might be to the topic at hand.

“Both parents are to blame,” was said repeatedly, especially when Crazy’s behaviour was clearly wrong and indefensible. And while they were blaming “both” they were always looking at me.

The game here, of course, was to bait me. Any angry response would then have been used to justify the doublethink.

“I don’t care about the parents. I’m concerned about the children,” they also said. This was the same as “Both parents are to blame,” but somehow nobler.

Were they concerned about the children? When the authorities decided to stick their nose in my family’s life, the eldest boy had left home. The other four children lived with Linda and I and saw Crazy regularly and often. All five children were close.

Here’s how it washed up:

Her three eldest children have disowned Crazy completely. They have also disowned the other two kids.

The eldest boy, who is not my son, brings his son around to my house. Yesterday I got to watch him doing his new trick called walking. We’ve still to decide on a name for me, but I think I’m settling with “Grandpa”.

Crazy has never met her grandson, and, despite living just a 15 minute car ride away, never will.

At age nineteen, Crazy’s second eldest (also not my biological son) asked Linda and I to adopt him. This we gladly did to give him some sense of normalcy. He calls us “Mum” and “Dad”.

The two youngest children decided to join their mother in her hatred and contempt for me. What caused me pain was the way they lied knowing that the big bully government would protect them.

They will pay a terrible price for their choices, because now they are stuck with Crazy.

I am not seeking any contact with them. I certainly would never be in physical proximity to them without a witness or a camera. I will never trust either of them again.

So when I talk about surviving Crazy, I am not talking about walking away without scars. But I did walk away with more than Crazy and the Australian government wanted.

I came away with my sanity, my identity and my dignity.

And make no mistake about this. At all times, I was the intended target. My wife Linda, my other step-sons, my children, mother, sister, and other family members, who were all hurt, were just collateral damage.

For Crazy, it was to bring me undone. My diagnosis is jealousy because I have a better life; but also a sick need to dominate anyone in her life any way she can – she has to be the centre of attention.

For the Feminists, it was a chance to dominate a man, while the rest just made sure that the dominating force was aimed at anyone other than themselves.

Every year, this is happening more and more. Every year, more men will be in similar situations. Here are some lessons I learned along the way.

Therefore it was crucial that I stood up for myself.

I also needed support. Luckily for me I have a supportive wife in Linda. She has given me tremendous strength, courage and comfort. As have the rest of my family and my true friends. And yes, it’s times like these when you find out who your real friends are.

It was also important to know the truth.

Without getting bogged down in philosophical debate, everything can be questioned and therefore doubted. This is something they use to their advantage. Everything I said was questioned, again and again. “But how do you really know that?” or “But what if your memory is wrong?”

Everything they said was stated with absolute certainty.

Doublethink is a terrible weapon. The iron certainty that they are right is difficult to stand up to, particularly when you know that the power of the state is behind them. It took a real belief in my own worth and a real understanding of my values.

I also needed to know my limitations and cut my losses. Early on, I realised that I had lost the youngest daughter. I still reached out to the youngest boy for a while longer, but in the end had to let him go to.

My sanity matters. I will not lose it for anyone.