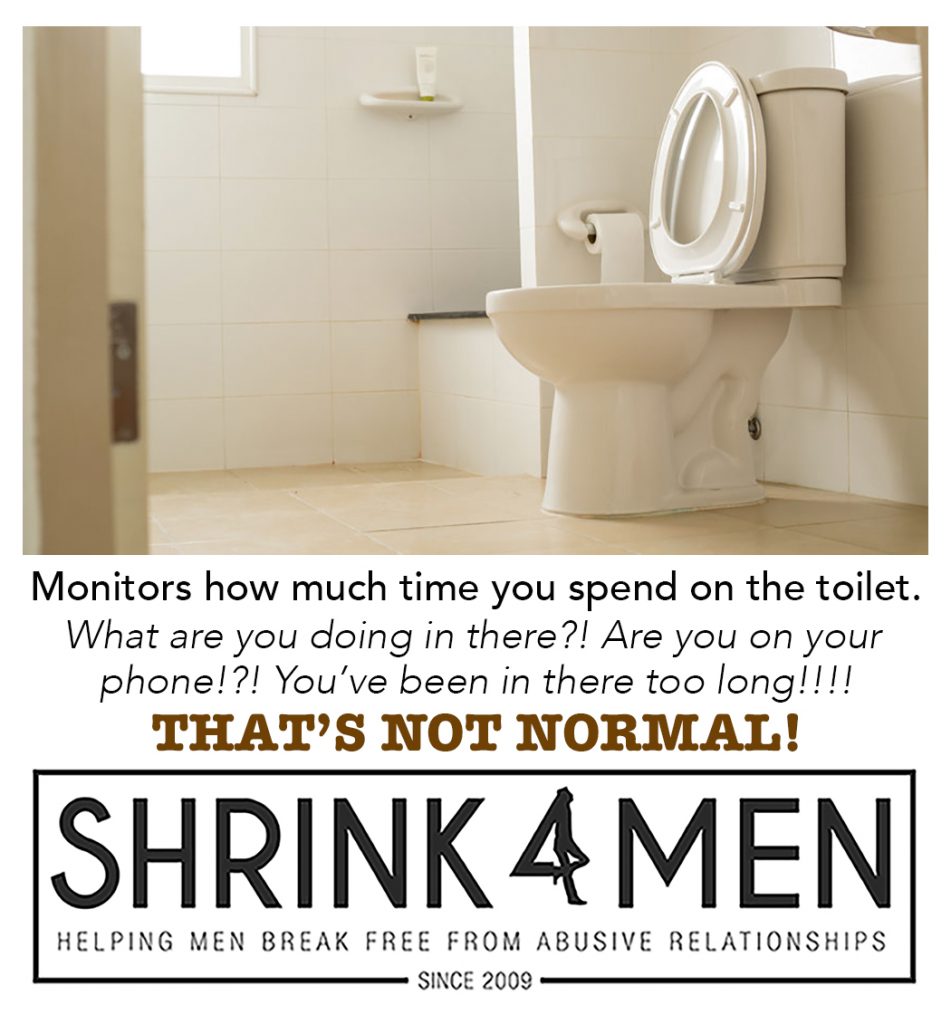 No, I’m not making this up. It really happens in some abusive relationships. Abuse is about control and power and, in some cases, that includes how much time the abuse victim spends in the bathroom.

Seriously. This happens to people. Why they tolerate it is another matter, but it happens.

I’ve worked with many men and women married to or dating narcissistic bullies, and super needy borderline and dependent individuals who literally monitor my clients’ toilet time. Many of them were forbidden to take their phones into the bathroom with them. Sometimes the abusers even demand that bathroom door locks be removed.

Monitoring doesn’t just occur in the john. Many people married to or dating narcissistic, borderline, histrionic, psychopathic controlling, insecure bullies and cry-bullies often get a daily barrage of texts, calls and emails while at work or doing errands. That’s if they’re allowed to do errands by themselves.

Where are you?
Who are you with?
What are you doing?
Who did you see?
Who did you talk to?
When are you coming home?
Why did you stop at Rite-Aid? You didn’t tell me you were going there!! Why do you need gum?!?!
You better get home RIGHT NOW!!! I NEED YOU!!!!!

Healthy, loving relationships aren’t prisons. You should be able to hang out with friends, bathe or take a leak without the Cluster B (narcissists, borderlines, histrionics and psychopaths, oh my!) or Cluster C (paranoiacs and dependent personalities) version of the Spanish Inquisition. You should be able to spontaneously stop at the mini-market for a coffee or a soda on the way home from work without being accused of cheating or lying by omission. You should be able to to do these things without them being used as proof that you’re a liar and a cheat for the rest of your life or until you wake up and finally leave your abuser. Whichever comes first.

This article was just going to be a short and sweet Facebook meme post today, until we caught a live one. Well, she’s either a live one or a troll. Possibly both. What follows is an exchange between Karin and Shrink4Men Facebook supporters. Karin justifies and rationalizes the behavior described in this article, which she admits to engaging in freely and proudly. I don’t know Karin or anything about her, her marriage and her life other than what she shared on the Shrink4Men Facebook page. No one’s identities are disguised because everyone voluntarily posted these comments on a public page.

If you’ve ever found yourself asking, “Why is she like that? Why does he think like that? How does she/he think this behavior’s okay?” read on. Karin’s posts, again, are (convoluted) rationalizations and justifications of these behaviors and attitudes. You can also observe her double-speak and mental jujitsu when challenged. If you’re not in recovery, you might want to pour yourself a Scotch before commencing. 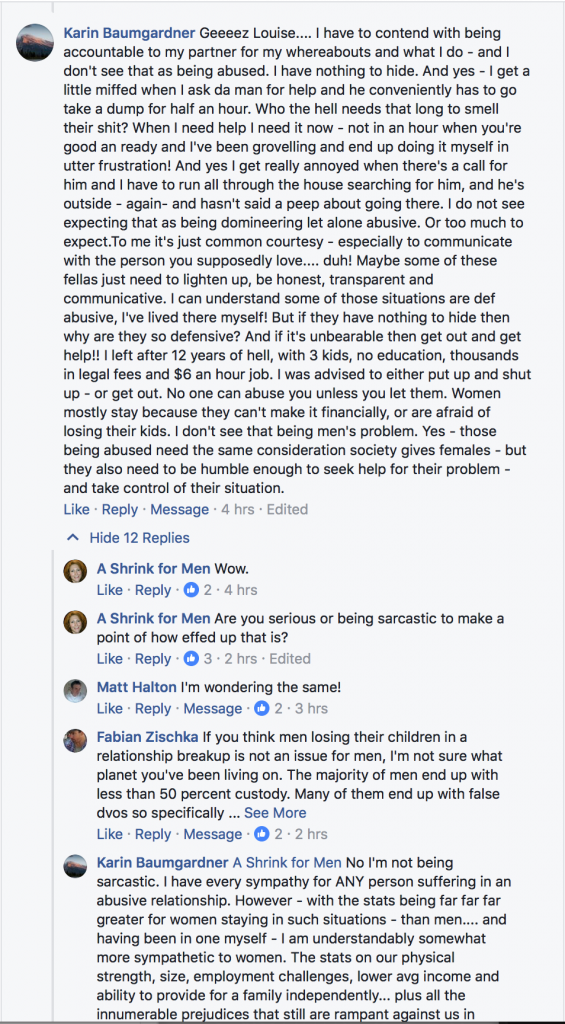 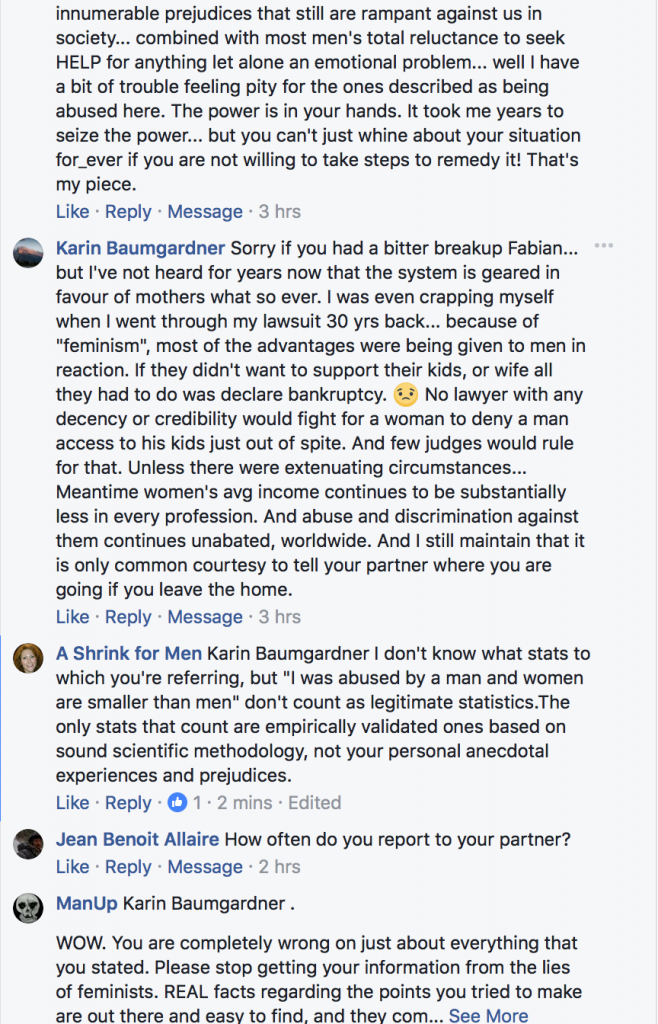 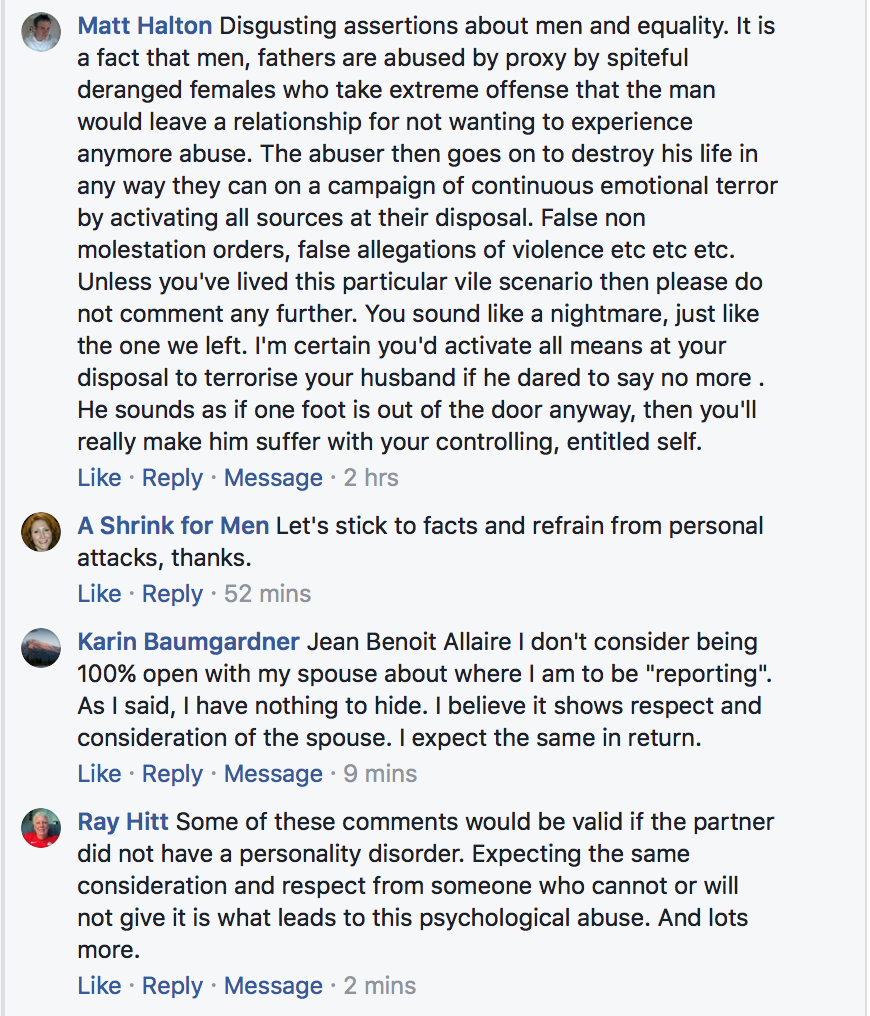 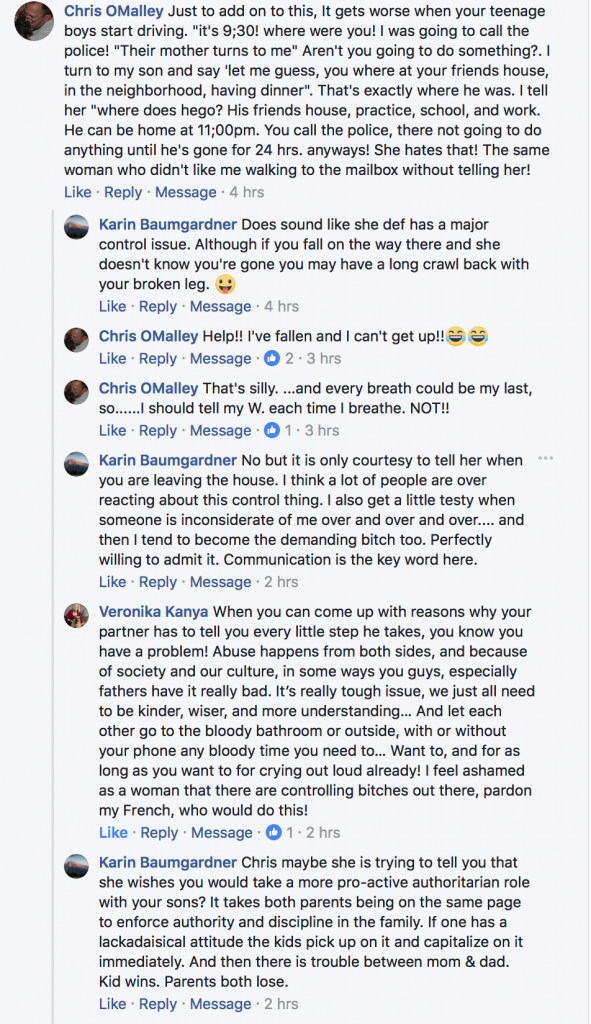 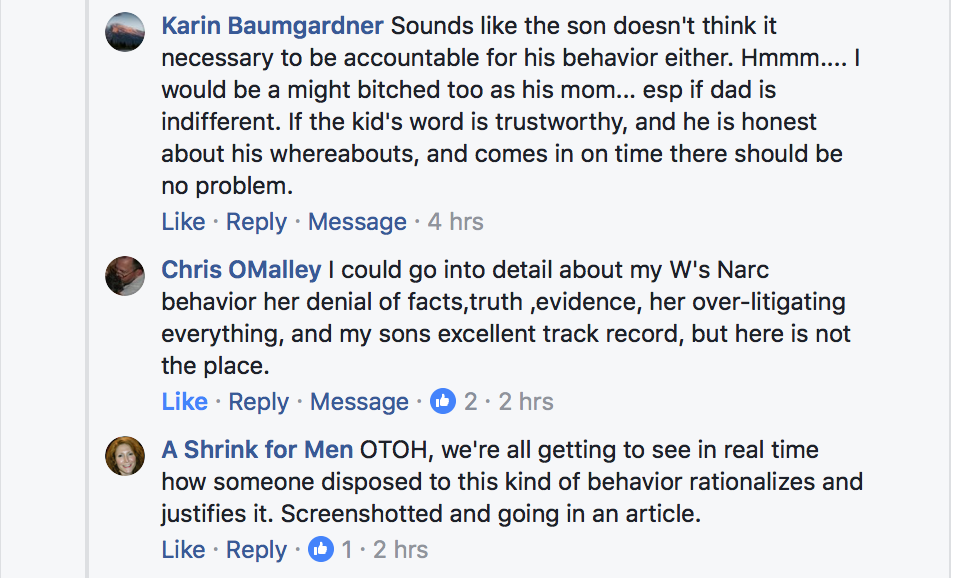 Let’s break it down.

Karin lets her partner know her every move and doesn’t feel abused, therefore, it’s not abuse. She gets to determine what is and isn’t abuse, even for her partner. This also begs the question, does Karin’s partner want to be informed of her every move?

How dare her partner need to go to the bathroom when she “needs” him to do something? How could he possibly prefer the smell of his shit to her dulcet tones and loving requests? (I will literally have an aneurysm if I don’t employ sarcasm while writing this.)

She “grovels” for his  help. (I somehow doubt this — demands is probably a better word choice based on her comments.) When she wants his help she needs it NOW, not when he’s able to help her. If Karin can’t locate her partner, then she has to do what she’s capable of doing herself for herself. Very frustrating indeed.

How dare he not immediately materialize when she busts her ass answering the telephone, which one presumes is sometimes for her? Why isn’t he available to answer the phone instead, dammit!? She claims she has to “run all through the house searching for him” (Just how big is their house?) only to discover — gasp — he’s gone outside without letting her know.

WTF? Does he actually expect Karin to take a message? Extending her partner that basic courtesy (i.e., scribbling on a notepad, “Your brother called”) is really annoying to Karin. Her partner should be front and center, standing at attention rather than doing something for himself. Karin is “utterly frustrated” when she has to tend to her own needs and wants, or answer a phone call that turns out to be for him.

Apparently going out for a breath of air or yard work without notifying Karin is an act of disrespect. It also means her partner’s being discourteous and uncommunicative and isn’t showing love for her. Karin thinks male abuse victims should “lighten up” about wanting some privacy, time to themselves and the ability to lock the bathroom door to relieve themselves without being barged in on and interrogated about what’s taking them so long. Jesus H. Christ on a cracker.

Karin tries to muster some empathy because she claims to be an abuse survivor herself, but “if they have nothing to hide why are they so defensive? And if it’s unbearable then get out and get help!” One would think a self-identified former abuse survivor would understand that these are abusive behaviors and how difficult it can be to get out. There are other women in the Facebook comments who’ve experienced this kind of abuse and are compassionate and supportive to the men who’ve also been abused in this way.

Karin continues to share her victim street cred, some cliched platitudes and her certainty that only women can be true victims of abuse. She also believes that mothers have a much more difficult time getting custody than fathers. To quote one Facebook commenter, “If you think men losing their children in a relationship breakup is not an issue for men, I’m not sure what planet you’ve been living on.”

I wondered if Karin was employing some form of satire, like Jonathan Swift’s Immodest Proposal, to make a point. Nope. She means every word she wrote and goes on to cite the usual unsupported canards that women are the real victims of abuse. Sure, there are some male victims, but not enough to count. That’s why she’s more sympathetic to female victims. Strange. Nowhere in anything Karin wrote do I see her being sympathetic, even a little bit, to male abuse victims.

This next bit is actually pretty funny:

…combined with most men’s total reluctance to seek HELP for anything let alone an emotional problem… well I have a bit of trouble feeling pity for the ones described as being abused here. The power is in your hands. It took me years to seize the power… but you can’t just whine about your situation for_ever if you are not willing to take steps to remedy it! That’s my piece.

Karin states this on a social media page whose primary purpose is to support male abuse victims. By their very participation on Shrink4Men, these men are seeking help and offering support to other male abuse victims. Jesus H. Christ on a cracker. I know I already said it once, but feel justified in repeating it. Maybe Karin is a troll. It’s hard to tell sometimes.

I think a lot of people are over reacting about this control thing.

Karin pontificates more falsehoods and misinformation about abuse, etc. She spews the usual female professional victim rubbish while she blithely bashes and dismisses male victims. The most important bit about her final comments is that she applies the same expectations of compliant, servile behavior to children as she does to her adult partner and would feel justified in abusing a child in similar ways.

Notice how Karin every now and again makes some seemingly sensible and reasonable statements. “Communication is key.” “Moms and dads need to be on the same page.” She does this just enough to make one question whether her crazy statements really are that crazy. They are.

Let me translate her seemingly reasonable statements. “Moms and dads need to be on the same page” means her page. “Communication is key” means her partner and children need to report their every move to her. “Dad needs to be more authoritarian” means she wants a partner to be her enforcer. It’s important to get a definition when they make rational sounding statements because it probably doesn’t mean what you think it means.

This is a good example of why many of us who’ve been in relationships with narcissistic abusers doubt our experiences and our own sense of knowing. She seems nuts, but she’s got a point there. The first part of what he said is bullshit, but one thing is accurate. It’s easy to get lost in the word salad and FOG (fear, obligation, guilt).

Aside from the sharp stabby pain in my neck from having waded through all of that, there is value in what Karin shared. For anyone hoping you can reason with or appeal to your abuser using logic, or by asking for mutual respect and courtesy, please re-read Karin’s comments. Is that how you define love, courtesy, healthy communication and respect? Or is that how you define control, tyranny, subservience and abuse?

Bottom line: She doesn’t see anything wrong with her behavior and beliefs. Ergo, she’s not going to change. She continues to see herself as completely in the right even when presented with other people’s experiences and actual data that contradicts and disproves her views. She’s just telling it like it is according to her, not how it is in reality.

If anyone reading this article thinks you can get through to Karin or those of like mind, good luck. I encourage you to don a helmet and a cup before going gently into that good night.

Meanwhile, here’s to hoping that you can someday pee in peace! It’s fabulous!