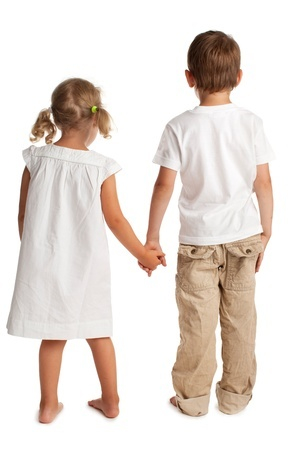 While Katie was siccing her fashion police on me, my brother started making some off the wall demands of my mom. He told her she needed to kick in money for the wedding and chase down Katie’s “irresponsible friends” (who we’d never met) to plan her bridal shower. He was constantly calling my mom up and telling her what she was or wasn’t doing that was offending Katie.

Katie did a great job of painting herself as the victim during this time. My mom tried to go over to their home one day to smooth things out, but instead my brother and Katie screamed at and lectured her for over two hours about my inappropriate dress and everything else under the sun that Katie found offensive. We were damned if we did and damned if we didn’t.

Things got so bad at one point that my entire family (over half their guest list) wasn’t sure they were going to the wedding. Katie didn’t care what she had to do to get her way. She was throwing innocent family members under the bus to prove her point. She twisted and turned everyone’s words and used them to her advantage. I even had to block her and my brother on Facebook because she kept insisting that everything I wrote, was somehow a cryptic, negative message about her.

She lied and did whatever it took to make herself the victim. She was so mad about my dress that she even admitted to my mom that she went to the store to try it on for herself! Of course her story changed when she realized how crazy that sounded.

In the end, I wasn’t invited to their wedding. My mom went and was miserable the entire time. Our once, close-knit, tight unit was completely busted apart within a matter of a few weeks. Keep in mind, by the time they had gotten married both my mother and I had only met Katie a handful of times. Most of those times we didn’t get much one on one time with her because they were at a party. She seemed way too comfortable and thought she had the freedom to say whatever she wanted, even if it was hurtful.

Katie took no responsibility for the way things went. She put the entire blame on my brother and my brother willingly accepted it. I went an entire six months of not speaking with him. My mom and him would speak every now and again, but every time they spoke, they would end up in a fight.

I hadn’t spoken to my brother in months, then one day as I was cooking dinner, I heard a knock at the door. I turned around and to my surprise it was my brother. He looked completely frazzled and stressed out. He opened the door and immediately started to apologize for everything that had happened and asked if I wanted to go for a ride and talk.

I invited him in, but he seemed very nervous to be in my home. His phone kept going off in his pocket and he finally excused himself to take the call. He stepped out onto my front porch and all I heard was him yelling. It was Katie. I thought they were fighting because he was at my home, but I couldn’t hear exactly what was being said. All I could hear is my brother speaking very loudly to a person who seemed to be screaming irrationally on the other end.

He fought with her for about 15 minutes and came back in. He now seemed even more stressed and out of sorts and he just wanted to get in the car so we could go talk. As we drove off my block, he had explained that he had started seeing a therapist to learn how to deal with Katie and that she was mad at him because he wouldn’t tell her exactly what he and the therapist discussed. She was also mad that he had chosen a female therapist.

As he was talking, I noticed Katie’s name kept popping up on the navigation screen in his car. My brother ignored her calls for a minute and further explained that things weren’t going well. They were only married for two months and apparently some major problems had already started to occur.

Katie kept calling. He couldn’t even talk straight and finally I asked him if she knew  that he was with me and he replied, with a very stern, “Noooooo!” He said he wanted to try to fix our relationship, but it would have to be kept secret from Katie for a while until he figured out a way to deal with her. As she kept calling, I saw his nerves getting more and more tense until finally, I told him he should answer it. He told me not to make a peep.

What I heard was the most angry, intense and demonic voice coming from the earpiece of his iphone. She was so irate, screaming at him that he needed to come home and gather his stuff before she threw it out on the lawn and destroyed it all. She kept screaming and repeating over and over that he needs to be home with in ten minutes or that she was done with him.

He hung up the phone and told me he had to go. He raced back to my house and dropped me off saying he’d be back soon. He never returned. I was terrified for him. I didn’t know what to do, but before he left I assured him I would always be here if he needed me.

The next morning he called me from his phone at work and asked me to download AOL Instant Messenger, so we could chat. Once I did, he apologized for all of the commotion and drama from the night before. I was just happy to hear for him. He started to explain that in the weeks prior, he started to do some research online and had come to the conclusion that his wife was most likely suffering from Borderline Personality Disorder (BPD) and that’s why she acts the way she acts.

He explained she had, “an intense fear of losing him”and that “she did crazy things because of it.” He also explained that she feels threatened by the close relationship him, my mom and I share and that he needs to show her his love for us is different from his love for her and there’s enough to go around. He told me he never wanted to go that long without speaking and that he was very sorry for what he did to me. He admitted it was all her but said that “it was him too and for the wrong reasons.”

Before he ended the chat, he asked that I not call his phone nor text him and that if I wanted to contact him, that I do so only on AOL during the times he was at work. I agreed. I was desperate to get back the relationship we once had.

A month went by and I didn’t hear from him except for two times I when I emailed him and he came back with one word answers. I was kind of upset. I was hopeful things were going to get better, but nothing had really changed. He had still missed almost 6 months of my son, his only nephew’s life, that he’ll never get back.

In a bid to try to push him to tell his wife he wanted to have a relationship with me, I wrote to him, explaining that I wanted him in my life, but felt weird about having to keep it a secret from his wife. At the same time, I assured him that I’d always be there for him, no matter what. My hopes however, were squashed when I didn’t hear back from him. She had successfully Hoovered him back in and once again, his immediate family was put on the back burner.

In two weeks, it will be an entire year since I’ve been “no contact” with my brother. He barely calls our mother. I’ve tried reaching out to him many times in the past few months but he doesn’t answer. It’s like he has completely vanished from the face of the earth.  He used to be very active on social media sites and now he hardly ever posts.

I highly doubt he does anything the “old him” used to do. She has told some family members that she often logs in, under his Facebook page. In July, I threw a surprise party for our mom for her 60th birthday. I invited him, but not his wife, seeing that she can’t stand me and won’t allow my brother to speak with me. I knew she wouldn’t want to come either way but I wanted him to know he was still welcome to be a part of our lives. He didn’t show or respond to the invite.

After the party, I made once last attempt to make amends. I offered to sit down and try to repair the damage, but what I got in response was a 15  paragraph letter telling me how I need to learn how to take the high road. Basically, he suggested I try to be nice to his wife and even if she’s still a bitch, well at least I could say I tried. I doubt he even penned the letter himself.

In a nutshell, he told me there is no chance of us ever having a relationship as long as she’s around. Unless I grovel at her feet and kiss the ground she walks on,  she wants nothing to do with me. No thanks!

My brother has missed the best year of my son’s life and he will never get that back. I’m not sure I even want a relationship anymore with the new person he’s become. I haven’t seen the real him since before Katie entered his life. Katie’s doesn’t even talk to her own sister because her sister’s husband either , “threatened to kill” or “tried to kill her” (another story that changes depending on how much sympathy she’s trying to illicit from you).

Also, she is now pregnant. I’m am so scared for that baby. I know she will use it as leverage against him. My mom is devastated. She knows if she doesn’t keep in line with what his wife wants, she will never see her grand baby. My brother is not allowed to see my mom without his wife being present either.

I saw him last week at a party. We didn’t speak or even make contact. It was really sad. I watched him stare at my son playing in the yard and I saw the sadness in his eyes. He looked torn. Torn between the old him and the new him. My brother is gone. I have to mourn and accept the fact that he will no longer be in my life. People used to tell us that they’ve never seen a brother and sister get along so good. Skeeter and Scooter. That’s what they used to call us. Now he is gone. I lost my brother to a Borderline!