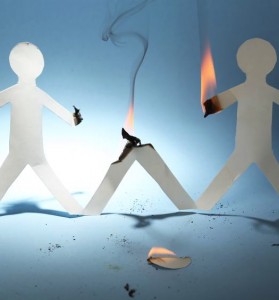 In our culture, family is sacred, well, maybe not as sacred as it used to be, but it’s still a cultural and psychological institution. As such, there are certain taboos attached to it.

For example, denigrating motherhood is taboo – fatherhood, not so much. Physical incest between family members is taboo. Emotional incest should be equally taboo, but let’s face it, our society – including mental health professionals and Family Court — often turns a blind eye when mothers emotionally incest their children by parentifying them, making them their surrogate spouses, confidantes, peers and emotional and physical caregivers. It is also taboo to break ties with one’s family, whether with a parent, child, sibling or grandparent, etc. Blood is thicker than water, but then again, so is bullshit.

Family may be the tie that binds, but it should not lock one into a permanent, gut-wrenching stranglehold of abuse, contempt, and financial, physical and emotional exploitation. Sharing genetic material is not a license to abuse a child, parent or other family member, carte blanche.

Sharing DNA means there is an obligation to take special care in your relationships with your family, not that you are obligated to tolerate a parent’s, sibling’s or child’s abuse because he or she swims in the same gene pool as you.

I have worked with many men and women, who have had to distance themselves, both emotionally and physically, and, in some cases, sever all ties from their parents, children and siblings after years of unrelenting and unrepentant abuse. These were not easy decisions for my clients who were wrought with guilt, anger, grief and other painful emotions.

The questions I ask in every case are, “If this person weren’t your mother or father or sister or brother or daughter or son, but were a colleague, acquaintance or friend and they treated you like this, would you have anything to do with them? Would you continue to turn the other cheek or would you cut them out of your life like a malignant tumor?”

When blood isn’t involved, it’s a no-brainer. You avoid abusive jerks, but when the abusive jerk is your mom or dad or your son or daughter, most people freeze like a deer caught in headlights at the thought of walking away. This is the aforementioned cultural taboo in full effect.

The emotional torment doesn’t stop after making the difficult choice to end a relationship with an abusive adult child, sibling or parent. Many individuals who make this painful, but rational and healthy decision are plagued with guilt, doubt and societal and familial pressure to maintain the relationship at any cost and in spite of the ongoing abuse. That’s when the Kumbaya Forgiveness Police (*thank you to whenthescapegoatquits for that expression) and well-intentioned, but clueless friends, other family members, pastors and many mental health professionals start the chorus:

But they’re your children. You only have one mother. You only have one father. Blood is thicker than water. Family is family. You have to forgive your family. What kind of a son or daughter doesn’t talk to their mom or dad? What kind of heartless monster won’t have anything to do with his or her children? I know your mother/father misses and loves you. She/he doesn’t understand why you won’t talk to him/her. No one will ever love you like your mother. As a parent, you should never give up on your children! Your children are your children forever.

I am not encouraging anyone to frivolously end a relationship with a young child, teen, adult child or other family member over minor transgressions or the garden variety, forgivable hurts that occur in all families. Severing ties with a family member is not something to be taken lightly and probably shouldn’t be done until you are either an adult (if you’re the child of an abusive parent) or until your children have reached the age where you can no longer intervene by getting them into effective therapy with an unbiased therapist who recognizes and knows how to treat parental alienation and manage an alienating parent who is hell-bent on poisoning children and destroying your child-parent relationship.

If your child is being alienated from you, you MUST do your best to intervene as soon as possible. The seeds of lifelong alienation can be sown in a very short time – like the time it takes to get a BS restraining order obtained against you under false pretenses dismissed, for instance. Or, while you’re supporting your family at work during the day while you’re still married, again, for instance.

It’s not unusual for otherwise healthy adults to have some bitterness during and shortly after the divorce process, which oftentimes spills out onto the children. Healthy reasonable adults realize that a child deserves both a loving mother and father, set aside their differences and get on with the business of co-parenting their children.

But there are many individuals who do not move past divorce bitterness and embark on lifelong campaigns to deprive their former partners of loving relationships with their children. Approximately 20% to 30% of divorces and custody disputes are considered high-conflict. It’s no surprise that this is approximately the same percentage of the population that suffers from some form of personality disorder. It is also a fact that both men and women engage in parental alienation, but alienation is much more effective when conducted by the custodial parent, of which 82% are mothers.

Whatever the underlying causes, it sets up the alienated parent, who is often the father, to become the emotional punching bag/disposable ATM for his ex and his children. There’s a bitter irony that a man, who makes the brave decision to end an abusive relationship with a cruel and sadistic and possibly crazy woman, then has his own children groomed to abuse him by proxy. It’s sick. It’s wrong. And it should be criminal and grounds for a permanent change of custody.

If you are facing this dilemma, whether you’re the parent of an alienated child or the adult child of one of these sadistic sick twists, here are some points and questions for you to consider when contemplating “divorcing” your kids, parents or siblings:

1. Is the family member in question an adult or a minor? If they’re a minor, are they old enough to know right from wrong? For example, a 14-year old should know that it is wrong to be deliberately disrespectful and cruel more so than a 3-year old child.

2. If the child is a minor, have you done your best to get them psychological help to undo the damage of the alienating parent?

3. Have you acknowledged, owned and tried to make amends for any mistakes or hurts that you have made in your relationship with the child or other family member?

4. If the child or family member is an adult, have you explicitly told them that their behavior is hurtful? In other words, have you tried to establish boundaries and rules of acceptable engagement?

5. If you have established clear boundaries, have you specified natural and meaningful consequences when they encroach your boundaries? For example, “I love you. You are my daughter, but it is unacceptable for you to insult me and my new wife, refuse to see me and then expect me to pay for your college tuition.” Or, “I love you. You are my son, but I will not continue to reach out to you if you continue to ignore me or treat me with disrespect.” Or, “You are my mother and I love you, but it is not okay for you to yell and scream at me about what a shitty daughter I am, how ungrateful I am and that no one cares about you. I am going to hang up when you act like that.”

6. Does your adult child, sibling or parent vilify and abuse you further for trying to establish healthy boundaries and limits? For example, do they think you’re being abusive, controlling, over-sensitive, etc., for wanting to be treated with basic kindness, consideration, respect and civility? Do they try to portray you as the “bad dad” or “bad child” or “bad sister or brother” for not wanting to tolerate their abuse?

7. Instead of honoring your reasonable requests to improve their behavior toward you, do they cry to anyone who will listen to them that there’s something wrong with you and that you’re the one who needs help?

If you answered yes to these questions, you probably have ample reason to consider going Low Contact or No Contact with your child, parent or other family member. Again, this is not an easy decision for most people and it may be necessary for you to work with a support professional in order to release yourself from the FOGgy (fear-obligation-guilt), psychological family bondage.

Since not all helping professionals are cut from the same cloth, you may want to screen a potential therapist for his or her views on these matters before you begin working with them. Anyone who encourages you to maintain an ongoing abusive relationship is best avoided and viewed as an abuse apologist and enabler – that goes for whether the person abusing you is an adult child, parent or spouse and whether or not they have a personality disorder. There is no excuse for abuse, including the excuse of a personality disorder.

Ending a relationship with someone who abuses you is often a healthy and necessary choice – even if that person is a family member. It is healthy to disconnect yourself from a family member who abuses you in the name of love and uses their privilege as parent, child, sibling, cousin or grandparent to do so. Although, there are many individuals (usually abuse enablers and apologists or people who are fortunate to have never had an emotional terrorist in their life) who will try to paint you as some kind of heartless, unnatural monster for doing so. In reality, it is the abusers who are unnatural and heartless because they are doing the psychological equivalent of cannibalizing their own flesh and blood.

Abuse is typically generational and cyclical. Abusive personalities rarely stop of their own accord. If you want it to stop, you will have to break the chain. Just remember, if you can put up with their abuse you are strong enough to distance yourself and put an end to it.