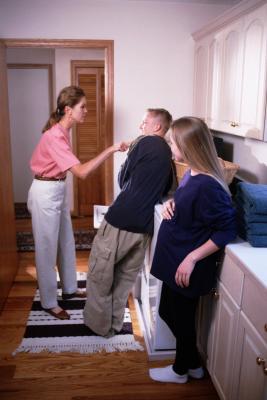 A Shrink4Men community member recently posted a link on the S4M Facebook page to a blog entry written by a woman who identifies herself as a mother with Bipolar Disorder.

Disclaimer: Not all individuals with Bipolar Disorder abuse others. Bipolar disorder can often be effectively managed with medication. Bipolar disorder is a mood disorder; not a personality disorder. Although, there’s often co-morbidity (i.e., a person with multiple diagnoses) between Bipolar Disorder and personality disorders.

Update 08/26.2011: Apparently, Bipolar Mom isn’t only bipolar. According to her bio on PsychCentral.com, she has a number of diagnoses, including Borderline Personality Disorder, which is an equally serious disorder that may impair the individual’s ability to have healthy relationships [end of update].

In the article, Don’t Test a Bipolar Mom!, the woman brags about getting into her adolescent son’s face and threatening him with physical violence. Apparently, her son mouthed off — nothing unusual, typical adolescent fresh mouth — and bipolar mom lost it.

In her post, she blames her son for her loss of control and abusive behavior. She even goes so far as to call him stupid for provoking her. 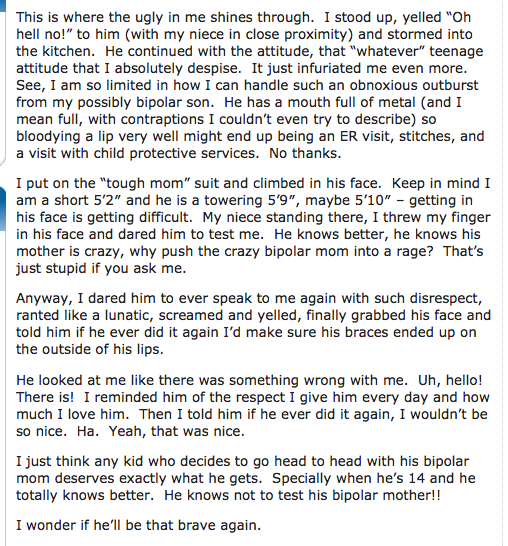 I wonder where the boy’s father is?

I wonder how it is this woman has custody?

I wonder, if this woman is involved in an ongoing custody dispute, if the judge has seen her post?

I wonder why PsychCentral.com left this post up as if the woman’s behavior is acceptable or an example of good parenting?

The most horrific passage in the blog is when bipolar mom states that the only reason she didn’t give her son a bloody lip is because she didn’t want to incur emergency room costs and is afraid of a CPS investigation.

In the comments section, bipolar mom defends her actions to people who posted comments telling her that her behavior toward her son is abusive: 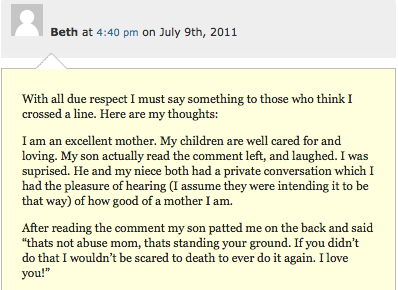 If her son really did say this, it seems like a case of Stockholm Syndrome. It also seems like an example of the mother using her mental health diagnosis to justify her bad behavior. Parents lose their cool with their kids every now and again — especially mouthy teenagers. However, these same parents typically feel bad about it later and certainly don’t brag about it as if it’s an LOL moment. Not once, in any of the comments I read does bipolar mom express remorse for her behavior. Justify and blame, justify and blame.

I removed the material quoted directly from the original post and inserted screenshots of it, so there’s no question about being misquoted. The original post was properly sourced and credited. Should PsychCentral.com request removal of the screenshots, I will comply.

I formed an opinion based on Bipolar Mom’s own words. And I’m not the only person of the opinion that the episode and behavior she describes is abusive.

As a mental health professional, I would have told Bipolar Mom, if she were my patient, that the episode she describes appears very much to be verbal abuse — no matter what her diagnoses are. As many of you have stated in the comments below, it is the adult’s responsibility to manage her diagnoses; not her 14-year-old son’s responsibility.

What I find dismaying is that the mental health professionals who oversee the blogs at PsychCentral have yet to flag this post and address it as an example of a woman struggling to manage her serious mental health diagnoses and parenting. There should be an addendum by the psychologist/therapist coordinating the blogs noting that this was an inappropriate and unhealthy way to handle the situation with her son along with suggestions on how she could have handled it more appropriately.