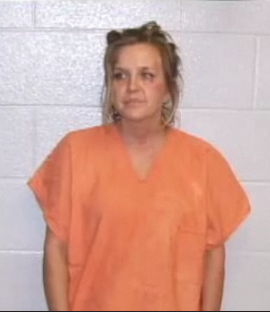 Harvick received the contempt order and accompanying 10-day jail sentence from Judge Edwards because she talked over her ex and continuously interrupted him and the judge during the proceedings.

Upon receiving the contempt order and jail sentence, Harvick leapt over the bench at Judge Edwards. Three deputies were required to restrain Harvick and remove her from the courtroom.

“Things have been escalating since the first of the year,” the woman’s ex-husband is heard saying in the courtroom recording, obtained by 27 NEWSFIRST.

Not long after that is said, Harvick is both seen and heard arguing with the judge.

“That’s got nothing to do with it,” said Harvick during the July 13 family court hearing, referring to her estranged husband’s comments about their personal life.

“Ms. Harvick, you will be held in contempt of court,” Judge Edwards told Harvick, after several profanities were said by Harvick.

Harvick is then seen jumping over the bench, in what appears to be an attempt to physically attack Judge Edwards.

Three deputies are then seen grabbing Harvick and pushing her to the floor. She was then taken away in handcuffs, allegedly threatening the judge as she was being taken out of the courtroom.

“You’ll be sad when it happens, Jennifer!” Harvick is heard saying.

Harvick is in jail on contempt of court charges now, but officials say more will be added.

Harvick seemed to feel empowered enough by the judicial system to argue with a judge, to physically attack a judge and then, as she was being forcibly dragged from the courtroom, to threaten a judge.

Here’s some video of the kerfuffle:

Visit msnbc.com for breaking news, world news, and news about the economy

More video that includes an interview with one of the three deputies who helped to subdue Ms Harvick:

I know it’s immature, but this news item makes me smirk. In fact, it caused a schadenfreude-gasm, as Rich Oliver would say.