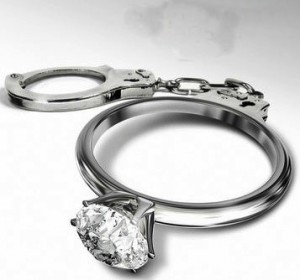 I have recently come across your articles on Shrink4Men and have been reading them — especially those related to controlling and abusive women — and am hoping you can answer a simple yes or no question for me:

Am I involved with a controlling and/or abusive woman?

I hate to sound dramatic, but the sooner you could answer, the better, as we are engaged and supposed to be married next week. I have become increasingly concerned that I am heading down a not-very-healthy path.

There are a few behaviors that concern me:

1. She frequently becomes extremely hostile and aggressive if I’m not able to meet her demands. For example, she fought with me for 3 days about not taking her to Paris where I was scheduled to work for 4 days. I explained that I couldn’t afford a last minute ticket, hotel, etc., for such a short trip.

Additionally, my job doesn’t allow significant others to go on trips. I offered to take her on another trip a few weeks later, when I had the time off and she refused. She had to go on the Paris trip. She even threatened to leave me if I didn’t take her. I ended up caving in and bringing her.

2. She often threatens to leave me or end the relationship when she’s upset or we’re having a disagreement. I’ve asked her repeatedly not to do this, as it really makes me feel insecure in our relationship. She’s done it repeatedly, even after leaving a therapist’s office a week ago, because she did not like the direction of the therapy session, and afterward told me, “I’m leaving.”

3. She has told me in no uncertain terms that a very good friend of mine (female, strictly platonic – always) is “not welcome in my house.” She doesn’t like this person even though they’ve only met twice, because, as best I can tell from really trying to have a heart-to-heart about it, she feels insecure about the friendship I have with my friend.

Honestly, I only see this person maybe twice a year. She’s been a close friend of mine for over a decade and dates another very close friend of mine. I’ve explained that I think it’s unreasonable to tell me she’s not welcome in the house, but she insists the only way she’s comfortable is if she doesn’t have to ever see her.

All of this has caused an extreme amount of conflict between us and I am feeling very high levels of stress and anxiety-borderline depression. I realize this is only my side of the story, but truly I’ve tried to explain everything as objectively as possible. She’s not a bad person, but I’m afraid that these behaviors will only get worse. My family and friends all tell me  her behaviors will get worse and that I should end the relationship.

From just what I described, I’m curious if you feel that she is a controlling/abusive person?

Thank you so much.

I can’t tell you what to do, but the behaviors you describe in your email are very troubling. Also, her behaviors are not that of a good person. If your description of her behaviors is accurate, she seems pretty bad to me.

I think it would be a colossal mistake to marry this woman. The behaviors you outlined are highly controlling and abusive. Your family and friends are right; your fiancée’s behaviors will most likely become worse after saying, “I do.”

Once an abusive woman legally binds you to her in marriage and/or with a baby, her behavior almost always gets worse. The attitude is, “I’ve got you now and if you try to leave, you’ll pay.”

1. “She frequently becomes extremely hostile and aggressive if I’m not able to meet her demands.” This is one of the biggest red flags of them all. Children have meltdowns when they don’t get their way; adults accept it or try to find a good compromise.

Your fiancée’s behavior is incredibly immature and abusive. Spouses inevitably disappoint each other from time to time. Being able to compromise and handle disappointment are essentials of a healthy marriage. Your fiancée’s behavior demonstrates that she’ incapable of both. If you marry her, you can expect her to continue to have woman-child temper tantrums whenever she doesn’t get her way — and why wouldn’t she?

She pitched a fit and you took her to Paris. She learned that if she wants to get her way, all she has to do is bully, intimidate and harangue you. Once a woman like your fiancée gets away with this kind of behavior even one time, it’s mighty hard to undo the damage. She’ll only escalate her tantrums.

2. “She often threatens to leave me or end the relationship when she’s upset or we’re having a disagreement.” The threat of abandonment is a control tactic; nothing more, nothing less. She figured out one of your “buttons” is abandonment/loss of the relationship. She’s using it to get her way and to silence you when you challenge her or try to express feelings/opinions that differ from hers.

This is the equivalent of a little kid threatening to take her ball and mitt and go home if you don’t play the game by her extremely unfair and one-sided rules. More often than not, the threat of abandonment is an empty one. It’s not easy finding someone who’ll put up with her abuse and other nonsense.

You should know this, Peter: Healthy people don’t tolerate the kind of behavior you’ve been tolerating. You don’t have to tolerate it either.

Much like her temper tantrums, she’s used the threat of abandonment to successfully manipulate you, which means it’ll be next to impossible to extinguish this behavior. Everyone has a toolbox of skills we use in relationships and life. More developed individuals use empathy, compromise, fair play and dialogue to negotiate relationships.

A woman like your fiancée has very primitive tools in her toolbox. She’s like a cave woman with rocks and sticks that she uses to clobber, prod and poke you. She no doubt failed to learn qualities and skills like empathy and compromise at the developmentally appropriate age. It’s highly unlikely she’ll be able to learn them as an adult. Bullying and intimidation are powerful tools. She’s unlikely to give them up easily because she’s probably been able to get whatever she wants by using them for most of her life.

3. “She has told me in no uncertain terms that a very good friend of mine (female, strictly platonic – always) is ‘not welcome in my house.'” This is another jumbo red flag. She’s trying to isolate you, which is a technique of abusers. They cut you off from friends and family — the people who care about you — to gain total control over you.

The decision to end an engagement is a frightening one. However, the thought of marrying and reproducing with this woman should be even more frightening. If you legally bind yourself to her and have children with her, you’ll effectively be signing your life away.

I know the thought of calling and emailing friends and family to tell them the wedding is off is unimaginable, but try to envision yourself 10 years down the road. After a decade of marriage, you’ll want to get out, but will worry how it will effect the kids. You’ll worry that she’ll abscond with the majority of your assets and destroy your relationship with the kids. You’ll feel stuck — far more stuck than you feel now. If you can’t end it right now, at least postpone it for a year.

Brace yourself, Peter. If you think her tantrums, tears and bullying are bad now, she’ll throw everything she’s got into pressuring you to go through with the marriage. Let your friends and family support you. Any embarrassment you may experience will be temporary. It would be far, far worse to marry this woman and give her little hostages with which to torture and control you.

Ending an engagement with this woman might feel like the end of the world, but it isn’t. Marrying this woman will be the beginning of the end of your world and then you will have to fight like hell when you later realize you should’ve listened to your instincts and said, “I don’t.”

What do you think? Should Peter go through with the wedding?

How many of you had similar concerns before marrying your high-conflict, abusive personality disordered, abusive, controlling, crazy wives or husbands? What advice do you have for Peter?