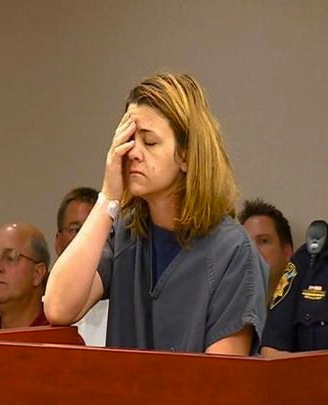 Kelli Lynn Murphy, 41, of Castle Rock, Colorado was arrested for the double homicide of her children Madigan, 6, and Liam, 9, early Monday morning, May 23, 2011.

Ms Murphy called 911 for help after cutting her wrists in a botched suicide attempt after killing her children.

When asked by the 911 operator if there were any children present in the home, Ms Murphy replied, “The children are already in heaven.”

Surprise, surprise, Ms Murphy and her husband, Robert Eric Murphy, are in the middle of a divorce and custody dispute. According to Denver’s Channel 7 News:

She accused her husband of being abusive to her and the children . . . Yet, Kelli Murphy acknowledged in court papers that she had never reported her husband to police.

Six days later, the wife asked a judge to dismiss the restraining order. She wrote her husband was “getting help (counseling) for his anger issues … and our children will no longer be in harm’s way.”

She requested a dismissal of the divorce on April 11.

“I do not want to divorce my husband. We filed papers wrongly out of anger,” Kelli Murphy wrote in her dismissal motion. “This needs to stop. We need counseling, NOT a divorce.”

“After attending the parenting class, I know we need to pursue every method we can to save this marriage, keep our family together before it is too late,” Murphy wrote, referring to a “Co-Parenting After Divorce Seminar” the couple completed.

The couple had filed for bankruptcy in June 2010, and the divorce and separation compounded their financial hardship, according to divorce records.

In court filings, Kelli Murphy said her husband had emptied their bank account and put her and the children “on an ‘allowance’ of what he sees fit to give us.”

Robert Murphy’s attorney said the husband was also in a financial bind because his “wife refuses to get a job to help pay the bills,” according to court records. So, all the husband’s discretionary income was going to pay for his wife’s living expenses and $800 a month in spouse and child support.

“(The) husband has been living with his mother in a small residence,” the attorney wrote.

In a dispute that may have been a flashpoint, Kelli Murphy had urged delaying a Monday hearing about temporary child support issues.

“Both of our kids … have end-of-year parties on May 23 that I had planned on attending,” she wrote, adding that her husband also wanted to attend.

Robert Murphy objected to the delay, and his attorney said the “wife refuses to let (her) husband have any parenting time other than the rare days that she allows.”

“The situation is dire, and (the) husband requires temporary orders to get a 50/50 parenting plan. Otherwise, much more time will pass for (the) husband with only limited contact with the children,” Robert Murphy’s attorney wrote.

Court records showed Kelli Murphy got a postponement of the hearing to Wednesday.

Yet, Liam and Madigan never made it to Monday’s year-end school parties.

He made the statement in a motion for a protection order against his wife, saying he feared he was “in imminent danger from Ms. Kelli Murphy.”

Instead, Robert Murphy said he received a call Monday morning from Douglas County sheriff’s officials saying that his wife had “killed our two children.”

In what was perhaps an instance of father’s intuition, Mr Murphy called the police to request a welfare check on his children the day before Ms Murphy murdered them. It’s unknown at this time if the police responded to Mr Murphy’s concerns and checked on them. Unfortunately, when the police finally did arrive, it was too late for Madigan and Liam and their now bereaved father.

This tale is becoming all too eerily familiar. A marriage to a high-conflict, possibly personality-disordered spouse crumbles and divorce ensues. High-conflict wife wants to punish husband and “win” the divorce at any cost.

In order to gain the upper hand in the divorce and custody case, ethically challenged, crazy, but calculating wife makes false abuse allegations and requests an emergency restraining order against husband with zero evidence of any abuse.

When her false allegations are thrown out due to lack of evidence or she voluntarily withdraws them, nothing happens to wife for perjuring herself, denying the father access to the children and the children remain in her care.

As wife shows herself to be less and less credible in the eyes of the judge and divorce proceedings stop going her way, she becomes desperate. The thought of “losing” and of losing control over the husband, the assets and the children makes the unthinkable thinkable: Wife kills the kids in some whacked out act of vengeance and an attempt to gain final control.

In order to avoid jail time, wife stages a non-fatal suicide attempt to gain sympathy and/or a temporary insanity pass and reasserts her former claims of abuse by her husband and . . . wait for it . . . claims she killed the children to “protect” them from their father. Only in the land of Koo Koo for Cocoa Puffs does it make sense to murder the child in order to protect the child.

Of course, it doesn’t make sense, but lest we forget that these kinds of women and men have a unique brand of logic and reason that is anything but logical or rational. Their rationale seems to be that their anger and fear are justification enough for any action, no matter how contemptible or heinous.

Next, feminist organizations get their talking points in order and claim she’s a victim of Battered Woman Syndrome—or whatever the heck they’re calling it these days—and the newspapers and other MSM outlets focus more on the unsubstantiated, not a shred of evidence domestic violence claims against the husband and father than the fact that a vengeful, out-of-control, monster/mother just killed her own children because, ultimately, she didn’t want to share custody and wanted to punish her ex in the most cruel and malicious way possible. The news outlets also ignore the fact that most people (who aren’t feminists, parental alienators/golden uteruses and mainstream media news reporters) now seem to realize abuse allegations are more often than not a tactical ploy in custody and divorce proceedings.

Making false allegations of abuse shows a lack of integrity, a willingness to lie, cheat and harm others in order to “win,” a complete disregard for the law, a complete disregard for the well-being of others including one’s own children (claiming that your children’s father is abusive is incredibly damaging to the children) and an attitude of being above the law. Click here to read more about the characteristics of high-conflict (HCP) and/or abusive personality-disordered women (APDI) who are likely to resort to murder during divorce.